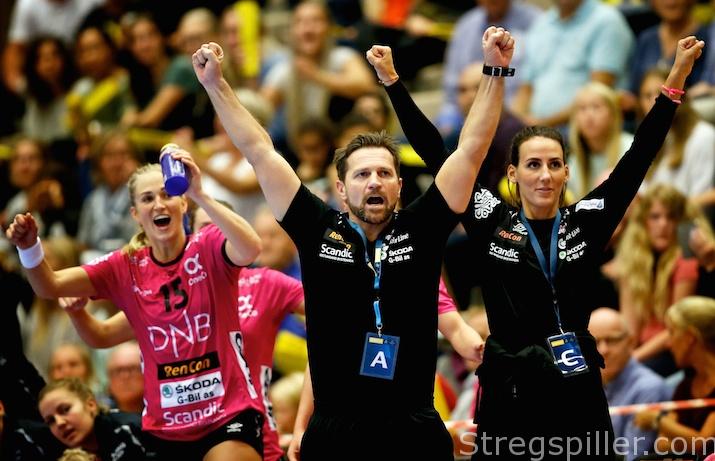 Vipers cruise towards the 2017/18 Champions League

Vipers Kristiansand are virtually assured of the Women´s Champions League group phase, although they have to play a group final on Sunday.

After the semi-finals on Saturday, it is obvious that HC Podravka Vegeta will be no match for the Norwegian top team.

Despite being debutants in relation to the Champions League, Vipers were generally seen as the odds on favorite, not only in this match, but also winning the entire qualifying event for the first time in club history.

Still, Gomel´s Slovenian coach, Tomaz Cater, believed that his fast playing team had a 50 per cent chance in the match.

Another very interesting aspect was the reunion of the Lunde twins.

Katrine Lune and Kristine Lunde Borgersen, both playing for Kristiansand now, were in the same team, for the first time in seven years.

As the final score clearly showed, Gomel were no match for Vipers.  And although assistant coach Kristine Lunde Borgesen was listed as a player, there was not need for her on the floor – not today.

The half time digits said it all.  Vipers were completely dominating the match.

It did not take the Norwegian squad long to establish a five-goal lead, and the total Gomel collapse occurred in the middle of the half, when Vipers scored no less than nine goals in a row, increasing the score from 10:6 to 19:6.

Two time outs and one change in defense (5-1) did not help the Belarusian champions, and it soon became clear that Gomel´s chances were as far away from the aforementioned 50 per cent, as Kristiansand is located from Belarus.  Coach Cater’s team had absolutely no chance to win this game.

The two goalkeepers Valiantsina Kumpel and Lilliya Burduk were helpless against the precise and varied shots from a fast-playing Vipers team.  And it did not help either that Gomel’s defensive system deteriorated rapidly as well.  Simply put – the club from Belarus was completely overwhelmed.

Why play the second half at all and continue the humiliation of a helpless Gomel team?

Why – well the rules say so, and that’s why the one-sided affair kept going.

Vipers coach Kenneth Gabrielsen made sensible use of almost his entire bench – including all three goalkeepers.  And Gomel did enjoy a few successful moments at the start of the half as well.

In fact, the Belarusians scored the first two goals after the break, but the upward trend did not last very long.

Vipers substitutes soon showed their quality on the pitch and it only illustrated the depth of coach Gabrielsen’s squad this season. Soon the onslaught of the first half continued.

In the very last minute of the match, Vipers had built their largest lead at 43:18, while Gomel had the honor of scoring the last goal of the game.

The “Aquarama” is by far not the largest handball arena in the world, but it was not sold out. Still, 1,358 spectators provided a festive frame for the one-sided affair.

Quite surprising to see a less than capacity crowd, as it was the first time that the pride of Kristiansand made it this far.

However, those who defied the fine early fall weather outside the arena, were enthusiastic supporters even though the excitement of the game soon disappeared.

Vipers will prepare for an easy final against Podravka on Sunday evening, while Gomel will take steps in the direction of another EHF Cup, no matter how their last game against Kastamonu turns out.

Two players of the Turkish team were denied their visas, a fact that dominated the headlines before of the match, in Turkey.

Kastamonu’s coach Hakan Günal, estimated having a 60% chance with his strongest team but unfortunately, he was only able to use 14 players including the goalkeeper.

Prodravka – the only former Champions League winner in the group – came with a young team, consisting entirely of Croatian players, in an effort to reach the Sunday final against Vipers.

Vipers coach Kenneht Gabrielsen had predicted that Kastamonu would be his team´s opponent in the final.  He was wrong, but the “unexpected” result will not cause him a sleepless night.

The level of handball in this late semi-final was simply too low, for any real concerns for Vipers Kristiansand.

It turned out that Podravak benefited indeed from the lack of Kastamonu’s resources and landed a deserved win, even though they were only able to decide the game in the last 10 minutes.

As it turned out, Kastamonu only had 12 players listed on their team sheet, and things certainly did not get any better for the Turkish champions, when their playmaker, Serpil Iskenderoglu, had to be carried off the court with what looked like a serious injury after six minutes.  Esma Muratovic took over the central backcourt position.

Still, Kastamonu managed to follow their opponent throughout the first 30 minutes of the match, although Podravka was no terrifying adversary.

They were in the driver´s seat most of the time, but they never managed to get ahead by more than two goals – Kastamonu kept coming back and a dead-even half time score was a reflection of it.

The deadlock of the first half continued. The score kept changing between a tie and a one-goal lead for Podravka.

The team from Croatia tried “woman-to-woman” defense against Kastamonu´s left-back Kristina Elez who had scored seven of the Turkish champions´ 11 goals in the first 30 minutes.

Although this tactical move interrupted the goal flow from Elez, it still did not translate into a decisive lead for the Croatian’s.

It continued this way until the 50th minute or so, when a depleted Turkish side finally ran out of gas.

Unable to score in the last six minutes, Kastamonu went down, and Podravka will meet the Norwegian host in a final match on Sunday evening.

…. had virtually vanished.  Very few of the 1,358 spectators from the first semi-final remained in the arena, and the atmosphere suffered, for the obvious reason.

I will take the liberty to congratulate Vipers to their Champions League berth, already.

There is no way Podravka will be able to threaten this very strong and fast team from Kristiansand. But before Vipers is expected to run over Podravka, Kastamonu and Gomel will sort out third place, in a match of very little significance otherwise.