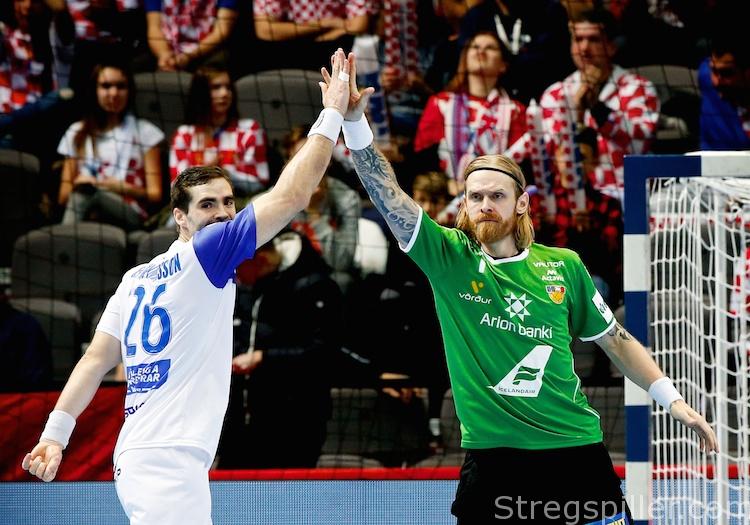 INTERVIEW – Björgvin Pall Gustavsson admits that his well-known temper helps him a great deal on the court.

It certainly did Friday night when Iceland recorded a surprising win against Sweden in the first round of the 2018 European championship.

“Emotions are necessary in sport.”

To no surprise this statement comes from Björgvin Pall Gustavsson.  The 32-year-old Icelandic goalkeeper is known for his temperament.

Last night, he was on fire, when Iceland opened Group A at the EHF EURO, succeeding in the Nordic derby against Sweden 26:24.  Gustavsson was the key figure in making sure that Iceland left the pitch as the winner.

With a saving percentage 50+ in the first half, he laid the foundation for his team´s victory, playing a critcial part in the Icelandic triumph.

He admits that his emotions are a big help to push himself, when he is on the court.

“Yes, it helps me a lot, although it can also be a handicap at times!

“But, Iceland is an island of volcanoes, as you know, and I admit to being a volcano myself!

“Emotions are necessary in sport, and to a great extend, emotions are what drives us in Iceland,” says the experienced goalkeeper who is currently playing for Haukar in his homeland after a long and often glorious career in Germany and Switzerland.

From next season on, however, he will return to top handball, joining current Danish league leader Skjern Håndbold.

Iceland´s opening win was even more astonishing given two poor performances in their recent test matches, which both ended in clear losses against Germany.

“Germany have a world class team, but our defeats against them made us humble, and we realized that we can only win, if we stand together.

“We knew that Sweden is a team of very high class, but we also knew that no one would expect a lot from us.

“Our spirit and our will to win drove us, and that was probably the main reason for some great 45 minutes against Sweden”, finds Björgvin Gustavsson who provided the explanation why Sweden moved closer towards the end of the game as well.

“We got a bit tired, but our desire to succeed kept us on our feet – I was never really afraid that we would not win this match,” he explains.

It’s all about the team

He does not want to talk too much about his own outstanding performance in Iceland´s opening win.

“We agreed beforehand that we would not allow any easy goals, and of course, I played a part in this respect.

“However, I think the entire team can take the credit for the win,” says Gustavsson who is one of the most experienced players in the Icelandic national team, today.

“Of course, I have certain responsibilities as I am one of our most experienced player, but what I like most is seeing young players grow and take responsibility as well.

“This is the way we develop and grow in Iceland. We do not have many handball players to pick from because of our small population.  So, it is important for us that there are some young guys who are ready to step up,” he says.

His temper will have to flare up in a positive way again on Sunday, when Iceland faces host Croatia in a premature top game in Group A.

“This may very well become a “crazy” game.

“Obviously the Croatians are expected to perform well in front of their own fans, and the arena will be sold-out and boiling!

“Once again, we can play without pressure, and I can hardly wait to play in front of this huge crowd that will undoubtedly try to make our life as hard as possible,” Björgvin Pall Gustavsson tells stregspiller.com