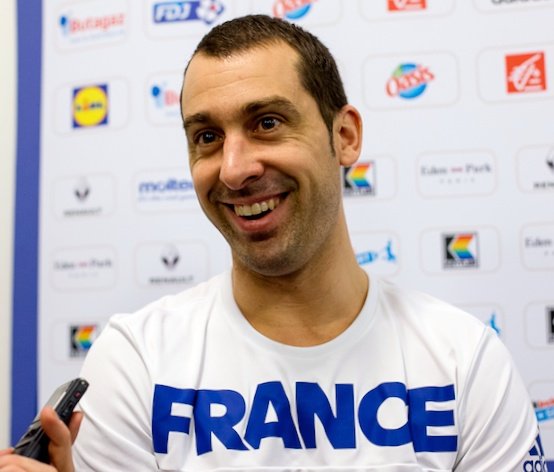 “We want to keep control of our destiny”

As Team France is coming off a three-day rest at the EHF EURO 2018, Kevin Domas spoke with French left wing, Michael Guigou, ahead of their main round battle with Sweden – a team Guigou is full of praise.

Did you watch yesterday’s games and if so, what do you think about it?

MG:  We didn’t watch the first one as we were practicing at the time, but judging by the score you could tell that Serbia performed pretty well. This team got some very good players who I’ve a lot of respect for.  And then the Croatia game – we saw bits and pieces and that it was a little bit chaotic.  Pressure, referees – the only important thing in this competition is to focus on yourself. And the rest will just happen.

Are you surprised that Croatia struggled so much?

MG:  Not really. There aren’t many weak teams in this competition. Look at Iceland, they were eliminated after beating Sweden. All teams have made a lot of progress and that may explain why Croatia had problems winning, yesterday.

Do you think that a victory against Sweden tomorrow could already hand you a semi-final ticket?

MG:  Probably – the team that wins tomorrow will have excellent chances to qualify. But the game between Norway and Sweden will be as crucial. What we want is to keep control over our destiny until the end. If we lose tomorrow our fate might depend on other results. We have to focus on tomorrow’s game – it will be crucial.

Some of you were talking about some kind of a “joker” that you may have, referring to your option losing a game without too much of a consequence? But nobody speaks about it anymore.

MG:  There’s none. If we lose one, we may not make it to the final four. We may be ahead of Norway but we only succeeded by one goal. So, if we lose against Sweden by four, and if Norway beats Sweden by two – we will be out. We have the experience to know what can happen.

Many say that Sweden is coming back into the limelight after some difficult years – what are your thoughts?

MG:  They have won so many times that the period when they delivered less, felt long. But over the last couple of years, they’re definitely back in the game. Last year at the World championship, the match between us and them had the character of a final. They’re the team against we struggled most, last year. Today, I think that Denmark, Sweden and Norway are a little bit ahead of the rest. We expected Croatia a bit behind but nothing’s over for them, yet.

Do you think of Sweden as the surprise team of the tournament?

MG:  Not really – they’ve got players that might not be superstars yet, but they all have high-profiles in their respective clubs. And we’re not talking about clubs in the middle of the pack, but about Kiel, Flensburg or Rhein-Neckar Löwen. They are used to playing with each other by now and they have an excellent pair of goalkeepers.  Sweden is a complete team with tall and strong handball players, a tough defense formation that helps their wingers to score on fast-breaks.