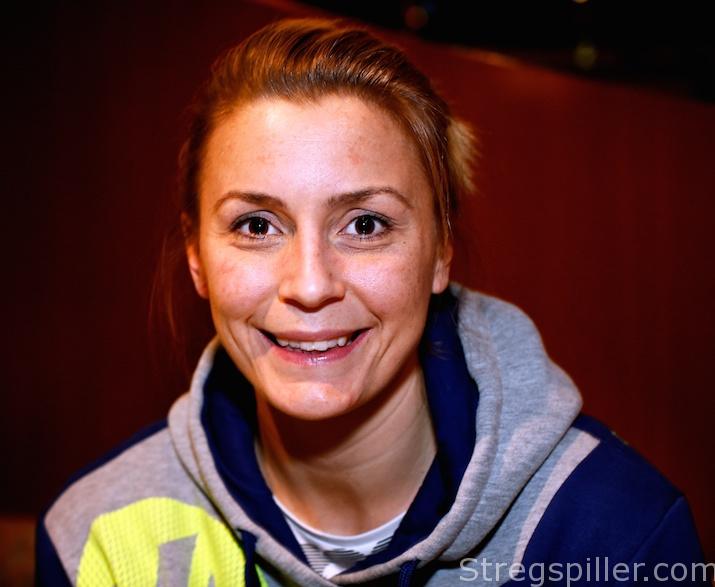 ”We want to make history”

INTERVIEW – If Sweden can overcome Slovenia in the Round of Last 16 in Leipzig on Sunday night, it will be the furthest Sweden ever got at a Women´s Handball World Championship.

Obviously, playmaker Isabelle Gulldén is eager to reach the objective.

If they defeat Slovenia in the Round of Last 16, at Arena Leipzig, it will be the first time Sweden reaches the quarter-final at a Women´s World Championship.

“Of course, we are eager to reach that objective,” playmaker Isabelle Gulldén tells stregspiller.com.

She and her teammates have already made this World Championship unforgettable, defeating Norway 31:28 on Friday night, in Bietigheim, winning Group B.

“Norway may not have played completely up to their level, but that being said, I think we played a good match.

“We really spent a lot of time – perhaps a bit too much – talking about the tactics for that match, but it paid off, I think.

“We were able to run a lot, and we made good substitutions at the right time, so everyone could withstand the high pace of the match,” Gulldén reflects.

In the German as well as in the Danish camp, Sweden’s win against Norway was welcomed, as the winner of the match between these two countries will now avoid Norway in the quarter-final, instead they will meet either Sweden or Slovenia.

Isabell Gulldén does not pay much attention to such speculations, though.

“We only focus on Slovenia.

“Sometimes you have to keep your feet on the ground and just focus on the next task.

“For us, this is Slovenia, and if we lose the match, we are out and can forget everything, and certainly about any other matches in the competition.

“Therefore, our win against Norway was really nothing special, if we are sent home by Slovenia. We need to focus entirely on the Slovenians, now.

“We did not forget that we lost against them in Stockholm, at the European championship last year – so apart from being very keen on proceeding at the 2017 World Championship, we are definitely hungry for revenge as well,” promises the 29-year-old playmaker who earns her daily living at ambitious CSM Bucuresti.

Just like Sweden, Slovenia has performed a true surprise at this World Championship.

Not as big as Sweden’s victory versus Norway perhaps, still not many people had seen Slovenia’s victory in their opening match against France coming.

The result only adds to Isabelle Gulldén´s respect for the Balkan nation.

“I think they have a really strong “first seven”.

“But, it looks like they become a bit tired towards the end of their matches – at least the ones I have seen – against Romania, for instance.

However, we should not forget that they have Ana Gros, a player who scores on nearly all her attempts. We really have to pay a lot of attention to her.

“Moreover, I think we need to run them and exhaust them that way,” describes Gulldén´s possible tactics ahead of Sunday’s game.

We have become more consistent

Not many people saw Sweden as a possible group winner, as they started the World Championship with a 30:33 defeat to Poland – a nation that was later sent out of the competition.  But four straight wins, crowned by the impressive victory against Norway on Friday, has led to a change of perspective.

“We have been a bit inconsistent, as we often are.

“At the European championship last year, we opened with a win only to lose the rest of our matches. But at this tournament, I think we have become more consistent as the group phase went on.

“If we can maintain that kind of stability for at least 55 minutes in the upcoming matches, I think we have gotten far!” says Isabella Gulldén who admits that she and her teammates are eager to make up for their rather disappointing performance at EURO 2016, last December, when Sweden were hosting the event.

“Of course, that is extra motivation for us.

“When we lost our opening match against Poland at this championship, we feared that our World Championship was over already, but fortunately we got our game going, and now I feel a very good energy in the team

“We all get along very well and this is an important reason, explaining why we perform well on court. Everyone contributes when they get their chance.”

Same objective as before

The astounding victory against their Scandinavian neighbor and archrival, Norway, did not lead to a change of Sweden’s objective in this World Championship.

“Our goal from the start was simply to finish as high as possible.

“The very first objective was to win the group and that we accomplished. So, now we can look a bit further ahead.

“Sweden has never moved any further than the 1/8 final at a World Championship.  We halve always been eliminated at this stage or even before. Now, our goal is to get at least one round further and enter the quarter-final.

“On Sunday night, we have the opportunity to write history, but I do not think we should have this on our minds when we enter the court.

“We should simply focus and give everything we have, to win this match. Thereafter, we can enjoy a historic result in Swedish handball” finds Isabelle Gulldén.