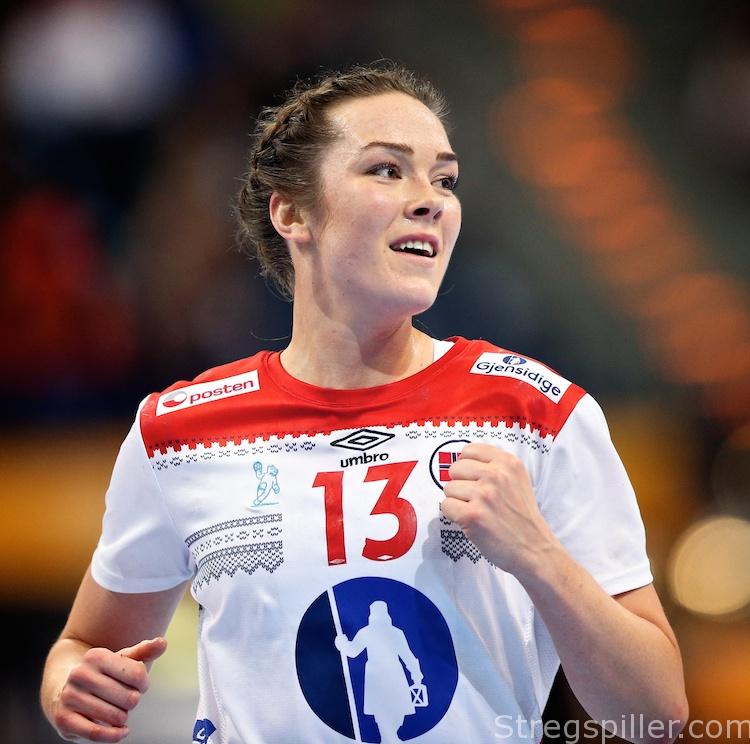 “We all are hungry for more titles”

However, the Norwegian international has no complaints being Györ´s lone force on the line, as she reveals in this exclusive interview with stregspiller.com.

Back in the spring, when Kari signed with Györ Audi ETO KC, she expected to share her time on the line with Dutch international, Yvette Broch.

But, things turned out differently. Right before the start to the season, Broch surprisingly announced that she would suspend her handball career indefinitely and with immediate effect for personal reasons.

Her decision left Györ´s new head coach, Gabor Danyi, with Brattset, next to 18-years old Emőke Varga, as the only real option on the line.  Such unexpected circumstances did anything but upset Kari Brattset.

“Yvette is a fantastic player who has been very important to the club.

“To me as well as everyone else it came as a big surprise, when she announced her career stop -I was looking forward to playing together with her.

“That said, it also presented a great opportunity for me to develop even further as a handball player. I have been shown a great deal of trust and received plenty of time on the pitch that allowed me to integrate into the team.  All of it has helped me a lot,” she tells stregspiller.com.

She would not have hesitated putting her signature on the dotted line when Györ called, even if she had known in advance that her expected “partner in crime” was about to quit.

“Györ carries an enormous prestige in the world of handball.  The club is always in the top, nationally as well as internationally.  And the organization has a very good and professional reputation – they offer an excellent environment for the team to be successful.

“To me, playing for Györ has always been a dream – so the choice was very simple,” says the 27-year-old Norwegian international.

While she may feel somewhat lonely when occupying the line player position, she is definitely not by herself in some other aspects of her (handball) life, in Györ.

She is only one of no less than five Norwegians in the Hungarian team this season.

“It provided me security to know some of my teammates beforehand and the fact that there are four other Norwegians here, who I already know from the national team, definitely made the change easier for me.  It also was a factor in my decision to join,” she says.

Becoming a full-time professional has been a new experience for Kari Brattset, as well.  Back in Norway she worked part-time next to her duties as a handball player.

“The biggest difference when I transferred to Györ has been the fact that now I can focus one hundred per cent on playing handball.

“At Vipers, I worked two days a week, but when I joined Györ, I had to get used to focus entirely on handball.  It’s great to be in an organization, where everything is done so professionally and where we are expected to perform all the time.

“Playing here in Györ will strengthen me as a handball player and as a line player in particular, I have no doubt. I can feel that already.

“I am challenged in new ways, in defense as well as in the attack. I receive different passes on the line – all of it helps my development.  In every training session, I practice with some of the best players in the world and I am in a team, where line play is really given a priority, unlike in so many other clubs,” she explains.

After having won the Women´s Champions League four times, including the past two years, Györ is considered to be one of the strongest clubs in women´s handball – possibly the strongest of all.

With it come huge expectations and pressure; factors Kari Brattset is already well acquainted with.

“Of course, there is a certain and constant pressure, but that’s something all the players here are used to, and besides, pressure is not necessarily a bad thing.

“Actually, I believe that pressure will help and make us perform even better.

“Such pressure is also a result of people believing in us as a team – we all are hungry for more titles.”

The biggest one of all, of course, is the Champions League title. Györ is among the favorites to take the trophy for a third year in succession.

For Kari Brattset all these expectations are absolutely justified, but she is aware of the competition.

“There are many good teams in the Champions League this season, but considering our ambitions and the squad that we have, we should definitely have a good chance.

“We should at least be able to win our group (including Podravka, Thüringer HC and Krim, ed.),” finds Kari Brattset who harbors a special dream: To meet her former club, Vipers Kristiansand in the competition.  And there is a decent chance that the two teams will meet in the main round already.

“Playing against my former club would not only be special, but a great experience. I have so many friends in Kristiansand and a visit there would be really cool!”