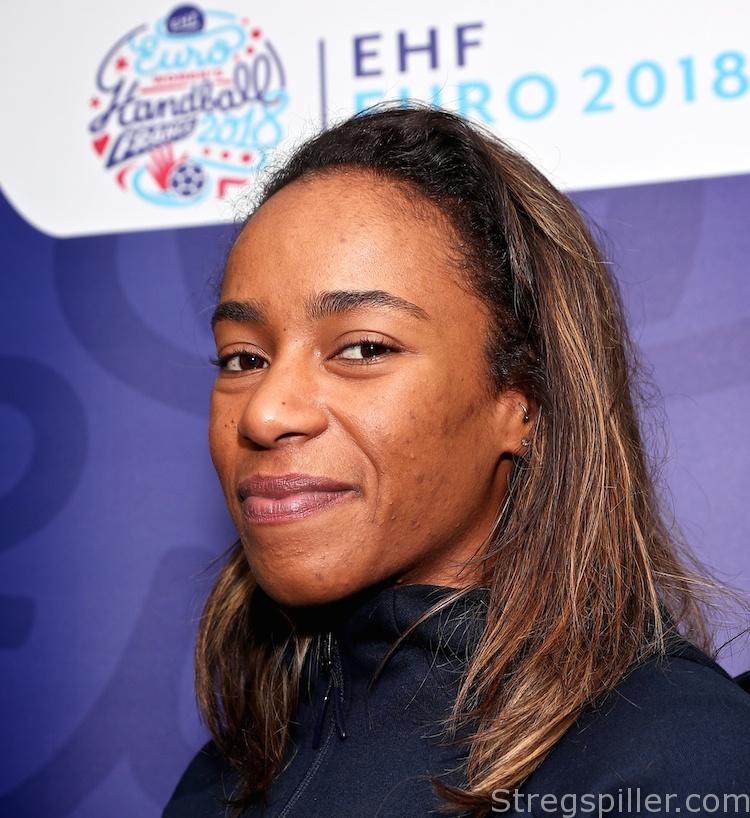 INTERVIEW – Having their second main round game at the 2018 European championship, against Sweden, postponed from Saturday to Sunday does not bother the French women at all, not when asking backcourt player, Estelle Nze Minko.

“We are professionals and can deal with such a situation,” she says in this exclusive interview with stregspiller.com.

In the early afternoon hours on Saturday, the women of the French national handball team should have been preparing for their second game in the main round at EURO 2018.

Yet, left back, Estelle Nze Minko, had time to talk to stregspiller.com, as the match against the Scandinavians has been re-scheduled for Sunday, due to expected demonstrations in Nantes, where the teams of Group 1 are playing their games.

According to Minko, the delay of game does not bother her or her team, at all.

“It doesn’t mean much if anything – apart from the fact that we have one more day to rest, which is good for us. As professional players, we are used to almost everything, when it comes to changes in and around games.

We simply focus and prepare thoroughly and do our job. It does not disturb our rhythm at all,” she tells stregspiller.com.

The extra day off allows for some time to look back at her team´s performance, so far in the tournament. Since the 26:23 defeat in the home opener, against Russia, she has only seen improvements with the 29:23 victory in the first main round match against Denmark as the best performance of France, thus far.

“I certainly sense that we got better and better from one game to the next – obviously, I hope we continue like this for the next games as well,” says Minko who delivered her personal best performance against Denmark as well.

“For me, it was a good first half, but you have to keep in mind that it always comes down to team work. So, I do not focus that much on my own achievement.

“Against Denmark, we did great as a team and that ‘s the way it is in the French national team. We do not have a particular star player. We are all good players, but it’s fair to say that no one scores more than ten goals and no one scores zero – usually.

“We all work for each other and that’s the way we succeed,” she says.

“We expect the most”

As the reigning World champion, the French national team has created a big stir, as the ongoing tournament is taking place on home soil.

Estelle Nze Minko is fully aware of such expectations.

“Yes, as you say, there are some high expectations, but as a team we experience the same.

“Of course, now as World champions, we want to become European champions as well and, in my opinion, the fans are helping us more than adding pressure.

“Playing at home with such enormous support gives us a big push forward. Seeing and hearing the crowd cheering for us is just great,” she finds.

Currently, Minko is playing in Siofok (Hungary), but originally she hails from Nantes, where France are playing their main round matches. She used to play for the local club, before moving on to Fleury and later making her move abroad.

Still, she does not hide how happy she is to play in her hometown, once again.

“Of course, it means a lot and is special to me – not only to play a European championship in my home country, but to play here in Nantes – my hometown.

“My parents live 15 kilometers away from here. So, I feel lucky and I am glad to have this opportunity to play in a championship at home, and I really mean “at home”. Not just in France, as France is a huge country, but here in my hometown.

“Seeing my parents and my friends in the crowd as well as lots of other people I know, is just great and extra motivation for me to perform even better,” she says.

The match that should have been played on Saturday, will now take place on Sunday afternoon instead.  It will be a game between two teams with their backs to the wall.

After Sweden lost their first main round match 30:28 to Montenegro, the Scandinavians cannot afford another loss.

“I think we are in the same “shitty situation” as them, if I may put it this way.

“We cannot lose another game either and simply cannot take the risk. Already, we wasted our first game against Russia – so the situation is somewhat similar for both teams.

“At this stage of the tournament, you must expect every game to be tight, as long as teams are still fighting to reach the semi-final. In a way, this will be our most important game, so far,” says Minko, who sees a straight forward path for France to become European champions, for the very first time in the history of women´s handball.

“If we succeed in every game from now on, we will win the tournament, but I do not dare to think that far ahead, right now.

“We know all too well that one poor game can put an end to all our hopes,” says Estelle Nze Minko.