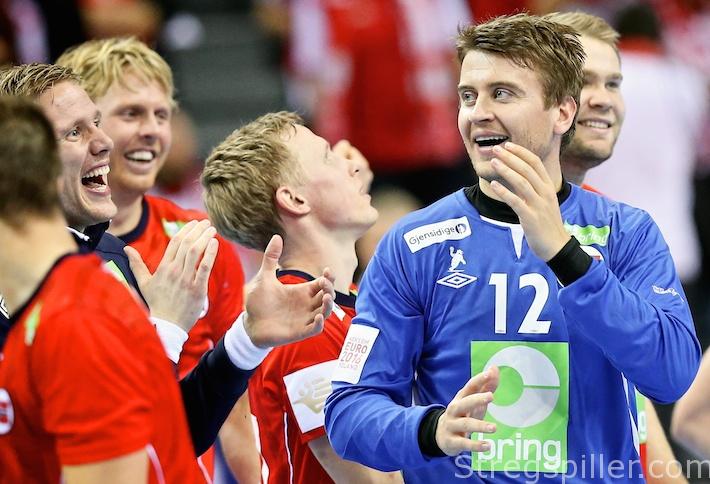 We are hungry for more!

INTERVIEW – One of Norway´s big heroes in the 29:24 win against France, goalkeeper Ole Erevik, is understandably happy about the historic semi-final, but he wants more.

He was one of the most outstanding Norwegian players, when the Scandinavians wrote handball history on Wednesday night by qualifying for the semi-finals at the EUO 2016 through an astonishing 29:24 win against France.

“It took a bit of time to sink in, but by now I think we have all realized, that we have not only written history in Norwegian men´s handball, but also beaten the Olympic champions, the World Champions and the soon former European champions,” says Ole Erevik, when I met him in the team hotel in Krakow, where all teams of Group 1 have been living close to each other for the past week.

“I admit that I did not sleep much last night, but that was not so much because of the match, but due to the fact that I was picked for a doping test, so I had to drink quite a lot of water.  That needed to come out eventually, so I had to get up a few times during the night, but I am not exactly suffering from lack of sleep,” says the 35-year-old goalkeeper, whose stellar performance played a major role in Norway’s triumph.  Yet, at this tournament, it has been Espen Christensen from Danish GOG, who has been guarding the Norwegian goal for prolonged periods rather than Erevik, but Wednesday, it was the veteran´s turn to shine.

“I do not feel that Espen has passed me as Norway´s number one goalkeeper, but I admit that I did not play well in our opening match against Iceland, so it was only fair that he got the chance in the following games,” he says.

That dreaded opening match against Iceland which Norway lost 26:25 did not give anyone any reason to believe that coach Berge’s team was heading for anything big in Poland.  Actually, many people expected Norway to travel home soon.

“I actually think we played great handball already against Iceland and I think we have throughout the tournament.  When we went on beating Croatia (34:31), going to the main round with four points, we still did not really think of the semi-final, though.  That only began to sink in, when we defeated Poland as well,” explains Ole Erevik, who has played in Spain, Germany, Denmark and now France since leaving his hometown, Stavanger, in Southern Norway.

“We feel that we have been riding on a wave – a wave of self-confidence – ever since our win against Croatia.  That is also the reason, why we did not lose our confidence in the first 15 minutes against France when they were leading by four goals and in the second half, we were completely dominant, in my opinion.”

In the semi-final on Friday night, Norway will be running into Germany, the other remarkable squad of this competition.  The Germans achieved the unexpected, when they defeated Denmark 25:23 after being down 23:21 with seven minutes left on the clock.

“Their journey at this championship has been a bit similar to ours, but I do not see them qualifying for the semi-final as big a surprise as ours against France, even though they (i.e. Germany) have many injured players.  Their results at championships have not been all that great in recent years, but I still see Germany as a big power in international handball, and I think that a semi-final at a EURO is where they should be, and where they should expect themselves to be.  However, we will be hungry for more, when we meet them.”

“Am I going to play?  I do not know yet.  That is for the coaches to decide.  What matters to me is that the shots are saved and not who of the two of us saves them.  I am content with my performance against France, of course and if I am playing on Friday, I will obviously try to do my best again.  And if Espen is playing, I am going help him as much as I can to play a great match,” promises Ole Ervik.