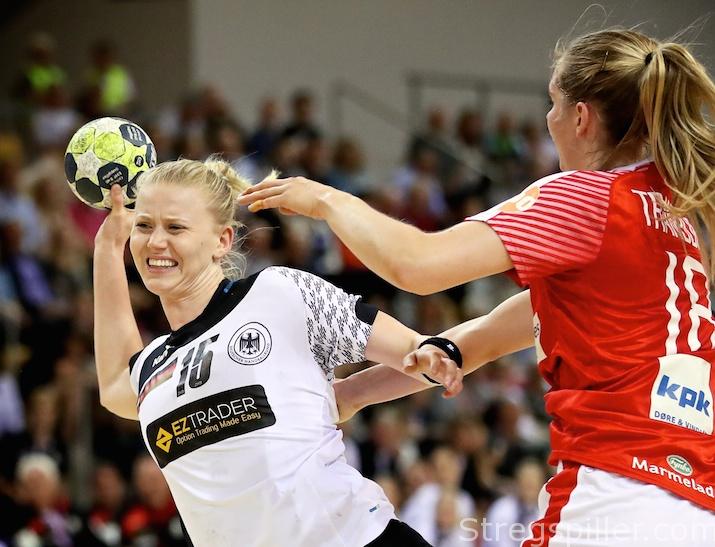 “We are very determined”

INTERVIEW – Ever since Kim Naidzinavicius entered the spotlight after winning the junior World championship in 2008, she has continuously progressed and today she is a key player, in her club, Bietigheim, and in Germany’s national handball team.   During her teenage years – she already played in the Bundesliga – everyone expected her turning into an international star in short order. But only recently, it appears, she has taken the final step after a number of set-backs.

Last weekend you stunned CSM Bucuresti in the EHF Champions League, a team filled with All-Stars. Do you think they underestimated you?

KN:  Maybe a little bit in the beginning of the game. But we also played quite well and went ahead 4:0 – I guess they didn’t expect this at all. We were able to continue scoring goals, but our defense couldn’t stop them for the whole sixty minutes.  In the end, we were able to hang on to our lead – we are quite proud of it.

You already took one point in Kristiansand. Why is everything working out so much better this year in the EHF Champions League?

KN:  Experience has a lot to do with it, I think.  Last season for many of us the league was totally new. Especially, the first game back in Podgorica was quite physical.  Now, we are used to it a bit more and it’s not that exciting anymore to hear the Champions League anthem before the match. We also have a quality team and our coach is able to provide enough rest for each player during a game, allowing us to have enough power all the way to the end.

Your next opponent – FTC – is another strong team in your group. What do you expect from them and the match, in general?

KN: We have played against them during pre-season, in Budapest and also in the Champions League main round, last season. FTC is a very experienced side and we need to be at our highest level to beat them.  But, this summer, we saw that we are quite close to them and another win is not impossible. Our defense will be the key to success.

Let’s talk a bit about the national team. How do you rate the level of the team, right now, after the most recent tests against Russia?

KN: It’s difficult to say because it was the first time for me that I was back in the team after my injury. I think you could see that we can compete against teams like Russia, but you also saw that we can’t make easy mistakes, because on this level you’ll get punished immediately.  At this point, all I can say is that we need to improve our defense. We do have a young, talented and hungry team, that will be able to compete in the future.

Considering the opponents during the group stage at EURO 2018, in France, later this year, it’s not inconceivable that you will exit the tournament after three games. What do you bring to the table as a team to make it to the main round?

KN: I think all of us, including the new players, are very determined, right now.  And Henk Groener is a coach who talks a great deal about the strengths of our players.  In addition, he has brought some fresh air to the group as well. We can be more relaxed the way he is leading the team.  And that’s why I think we can also reach the main round and not feel too much pressure

Tell me, what has really changed and improved since the 2017 World Cup?

KN: Obviously, the roster has changed dramatically. Some players who were part of the team ever since I began playing for Germany, like Clara Woltering or Anna Loerper, have retired. It’s a strange feeling and you have to get used to it. And, of course, Henk Groener is just a very different coach compared to Michael Biegler.  It doesn’t mean it was bad back then and now it’s great – it just is a big difference.

Just recently coach Groener announced to name you as the new captain of the national team. Were you surprised when he told you about his decision?

KN: I was a bit surprised because we only talked a couple of times before and this was the first time I was a part of the team since he took over.  I am certainly very happy that he trusts me so much – it’s a great honor.

What are his expectations and what do you anticipate?

KN: Definitely to be a leader on the court and during training camps. Now, I’m one of the more experienced players and the upcoming tournament (EURO 2018 ed.) will be a “first” for many of us.  So, I’ll try to help the girls and keep all kinds of worries away from them.  But, I think my position as playmaker forces me to lead the team, anyway.

So, it doesn’t feel like a big burden to you?

KN: No, not at all. I expect a certain performance level from myself and this has nothing to do with the fact of being captain of the team.

Expectations have always been high during your whole career, are you finally playing on a level that you are happy with?

KN: I think, when I look at my career, so far, I have made many decisions that were right, as far as when to change clubs, for example.  Usually, I played in teams that pushed me to take the next step, and I received plenty of time on the court. The move to join Bietigheim was a very good one for me, because here I can practice with some outstanding players on a daily basis. Prior to the World Championship last year, I was performing on a very high level, before I suffered the knee injury.  But, I always wanted to get back to the same level as soon as possible and become an even better handball player than before.