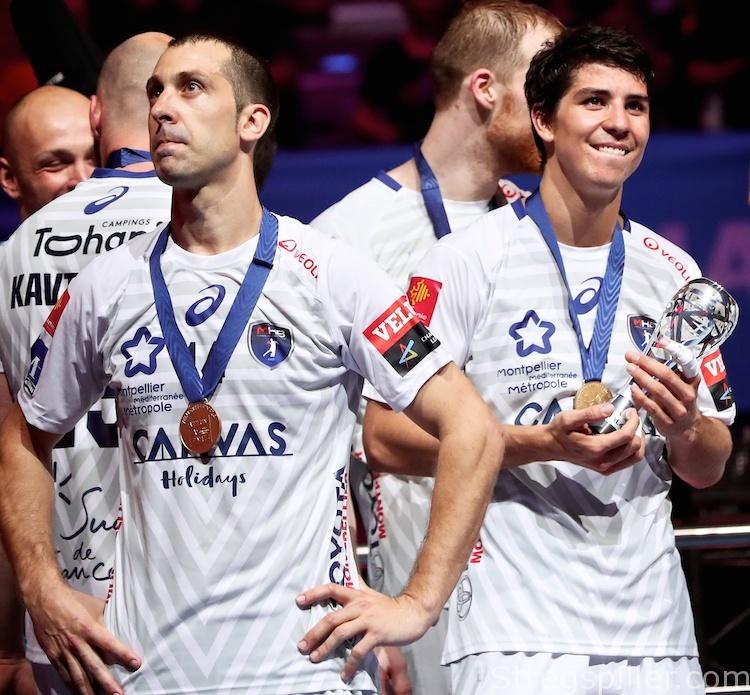 “We can be very proud”

INTERVIEW – Among the sixteen players who lifted the Champions League trophy on Sunday, in Cologne, left-wing Michaël Guigou was the only one who was on the court when Montpellier won their very first Champions League title, back in 2003. He looks back at the past fifteen years.

Michaël, you won the Champions League in 2003 and this year you succeeded again, how unbelievable is it?

MG:     We’ve been through a crazy week and we’ve lived through every emotion that exists – disillusioned on Tuesday in Saint-Raphaël, followed by nights that felt like hell and when we lost a lot of energy. But we’ve been able to collect ourselves and give everything this past weekend. We dominated our opponents and this time we didn’t crack. We can be very, very proud.

As the “elder statesman” of this team, can we assume that you’re also proud of all those young players?

MG:     Yes – of course, on the French national team, we’re going to have a generation that will dominate handball more than ever. There will be so many talents – maybe too many – players such as Melvyn Richardson and Ludovic Fabregas, who play here in Montpellier. I try to help them but they already know a lot of things. Now, they’re just like me, they’ve won the Champions League at the age of 21. I want them to do even better than me and to keep French handball on top of the world. At the end of the game, I told them, I’m very proud to play alongside guys like you.

This year there were three French clubs at the Final4, a clear sign that French handball has never been so strong…

MG:     Yes – here in Montpellier, players leave us because we don’t have the same budget as the big clubs in Europe. Today, we sent a signal that we’ll make the most of this generation and we will try to win while they’re here – plenty of talent helped by some veteran players. Over time, it will get harder but for Nantes as well – Tournat already announced he would leave and Lagarde might as well. Today, French handball has money, but we have less money than Paris to keep our best players; so you have to give everything on the court. We have to enjoy the fact that there are three (French ed.) teams in Cologne but we have to carry on working and develop young players.

How would you explain the statement that Montpellier’s still “here” – Nantes’ Rock Feliho said, “you can’t ever bury Montpellier?”

MG:     That’s true! I think a lot of people talked about it, ever since we lost against Aix in the league. Everybody was saying that Montpellier would crack. Anyway, let’s come back to what Vincent Gérard said on Tuesday, that we’ve been put in a position where we would crack. But that’s a different topic. Back to the question – Montpellier works. Montpellier will always work and will always find ways to be among the best clubs in France and in Europe. Today’s performance is solid prove and you can say whatever you want, but we’re the only French club that won two Champions League titles. We can be so proud of this achievement.

MG:     Well, I wished there had been more in between. When we won the title in 2003, a lot of players left afterwards. Didier Dinart, Cédric Burdet, I think Bruno Martini as well, but that didn’t stop us to play a semi-final two years later. Re-building a team is tough. When you see a club like Veszprem that has yet to win the Champions League, it shows how difficult the task is. The pressure is enormous and there’s this philosophy to overload players with more and more matches every year – it leaves a lot of things to handle.

MG:    I’m proud of myself – it’s been a great effort. Everybody keeps asking me why I stayed in Montpellier all this time. When I was young, I was a fan of OM-Vitrolles, I hoped I could wear their jersey one day, but then they collapsed. I’m very proud to represent French colors when I play handball with Montpellier or France. To bring a second Champions League title to French handball is a beautiful thing. But after fifteen years, I thought about it less and less. This season, I was thinking more about the league. But things are how they are and I’m fine with it.

Does this Champions League title have a different taste, considering the fact you almost lost sight of it?

MG:     In Montpellier, everything’s a little bit tastier lately. We are not favorites anymore, when you win less, you appreciate it even more. The most recent victories I’ve enjoyed with Montpellier are certainly the most beautiful I’ve ever experienced. The older your get, and the closer you get to the end, you begin to feel a different sense of pride. The emotions of this (Champions League ed.) title have been very, very strong.