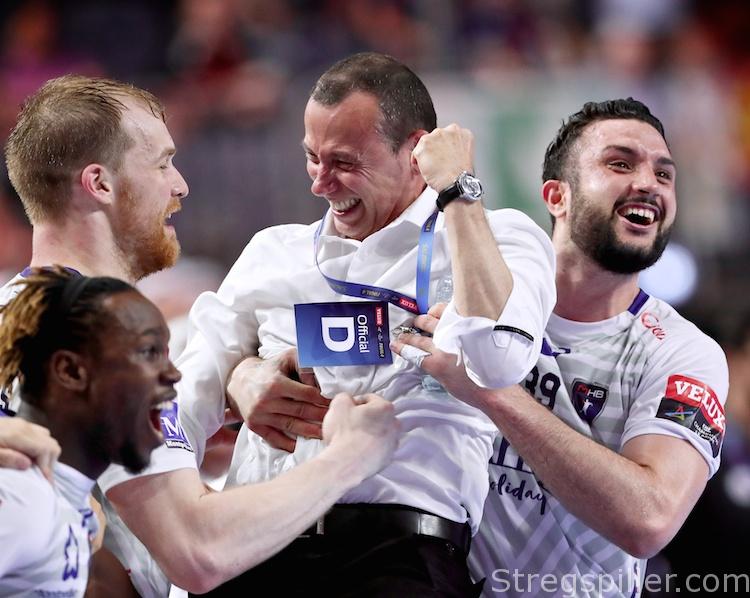 INTERVIEW – Is it crisis time in Montpellier?

Not yet. But, it’s do-or-die for the reigning champion of the VELUX EHF Champions League. If a crisis results, it will have to wait until next week.  For now, the club still has every chance to qualify for the Round of Last 16 of the competition.

Every chance? Not quite, as Montpellier will need to return from Skopje with a win, to assure participation in the next round of Europe’s premier handball competition. A draw could play to the advantage of Meshkov Brest and a loss against Vardar will bury all hopes.

“The Champions League presented plenty of problems this season as we lacked control. We’re definitely not where we would like to be. In the French league, in the French Cups, we are where we wanted to be. But, the Champions League is something else. There’s a lot more media attention, we are titleholders and all of those things added pressure. And, when you’re not as good as people think you should be, it makes things more difficult,” explains Montpellier’s head coach, Patrice Canayer.

If Montpellier exits the Champions League after this weekend, it would be the first time in the history of the competition, that the reigning champion wouldn’t reach the Round of Last 16 in the season that followed their triumph. The French side already collected a number of dubious records this season and would like to break the trend. When asked about what the main problems are, Canayer points to many small issues rather than one major reason that explains it all.

“There’s something that I don’t understand. We don’t lack motivation and I refuse to think for one second, that the players who started the game against Barcelona, last weekend, didn’t want to win. The problem is execution. Last season, the pressure translated into something positive; it felt like we could beat anyone. Barcelona, Paris, Flensburg, nobody could scare us. This year, we sometimes find ourselves in the same position. As in Kielce, two weeks ago, the pressure was on us,” explains the coach who succeeded twice in the Champions League with Montpellier, in 2001 and 2018.

Even stars go through tough  times

Diego Simonet’s recurrent injuries are of no help either. Surely, it’s not the player’s fault, but in the game against Kielce, the Argentinian center-back suffered the same hamstring injury that hurt him back in December. All in all, he only played ten games since the beginning of the season. In the match in Kielce, you could see how important he is in Montpellier’s system, as the team delivered one of their best performances this season.

“How can a team like us play for six months without their regular playmaker?  Take out Nicolas Claire in Nantes or Luka Cindric in Kielce for half a year and they will have to play differently – it’s a huge frustration. Diego adds enormous stability to the team.”

Canayer won’t say it, but it’s no secret that he’s been disappointed with some of his players’ inability to take on the role as playmaker.

Mohammed Soussi, for instance is almost invisible this season, whereas last year he was in magnificent form. The same holds true for Jonas Truchanovicius.

“At the moment, Jonas is learning how to deal with his new status in the team and the responsibilities that come along with it. Last season, he showed phenomenal progression. Now, things are a bit tougher. Some agents think that because some players played exceptional well for two or three months, that they can continue doing so on a daily basis. But, that’s not true. Even (football ed.) stars like Lionel Messi or Neymar go through tough times. In clubs with a huge roster it won’t be noticed as much but in Montpellier, we don’t have the money to compete on that level,” says Canayer.

Add to it the physical strain of playing every three to four days, after competing in ten games or so in three weeks during the World Championship in January and you get one more reason why Montpellier is struggling at the moment.

“Jonas is underperforming, Diego has been injured for the past six months – so we have to compensate for two of our best players.  But, I’m not going to put more pressure on them. We ask players like Kylian Villeminot to step up.  At the moment, he has many more responsibilities than he actually can’t handle. Not because he’s a bad player, but because he’s young and lacks experience,” admits Canayer, who can still count on his line players, who perform at a better level compared to the first part of the season.

At this point you may think that it’s all about clouds and darkness in Montpellier – it’s not. Neither players nor coach lost hope to qualify for the knock-out round of the 2018/19 Champions League.

In a twist of history, Montpellier will be playing against Skopje three days after competing in Saint-Raphaël. It’s the exact same sequence of events as in 2018, when they lost their chance to become French champion on a Wednesday before beating Vardar in the semi-final, at the VELUX EHF FINAL4 in Cologne, two days later. Patrice Canayer doesn’t pay attention to it.

“A game is one moment of history. The past is useless, future is useless – all that matters is the moment, right now. That’s what makes sport fascinating and terrific at the same time” he concludes.