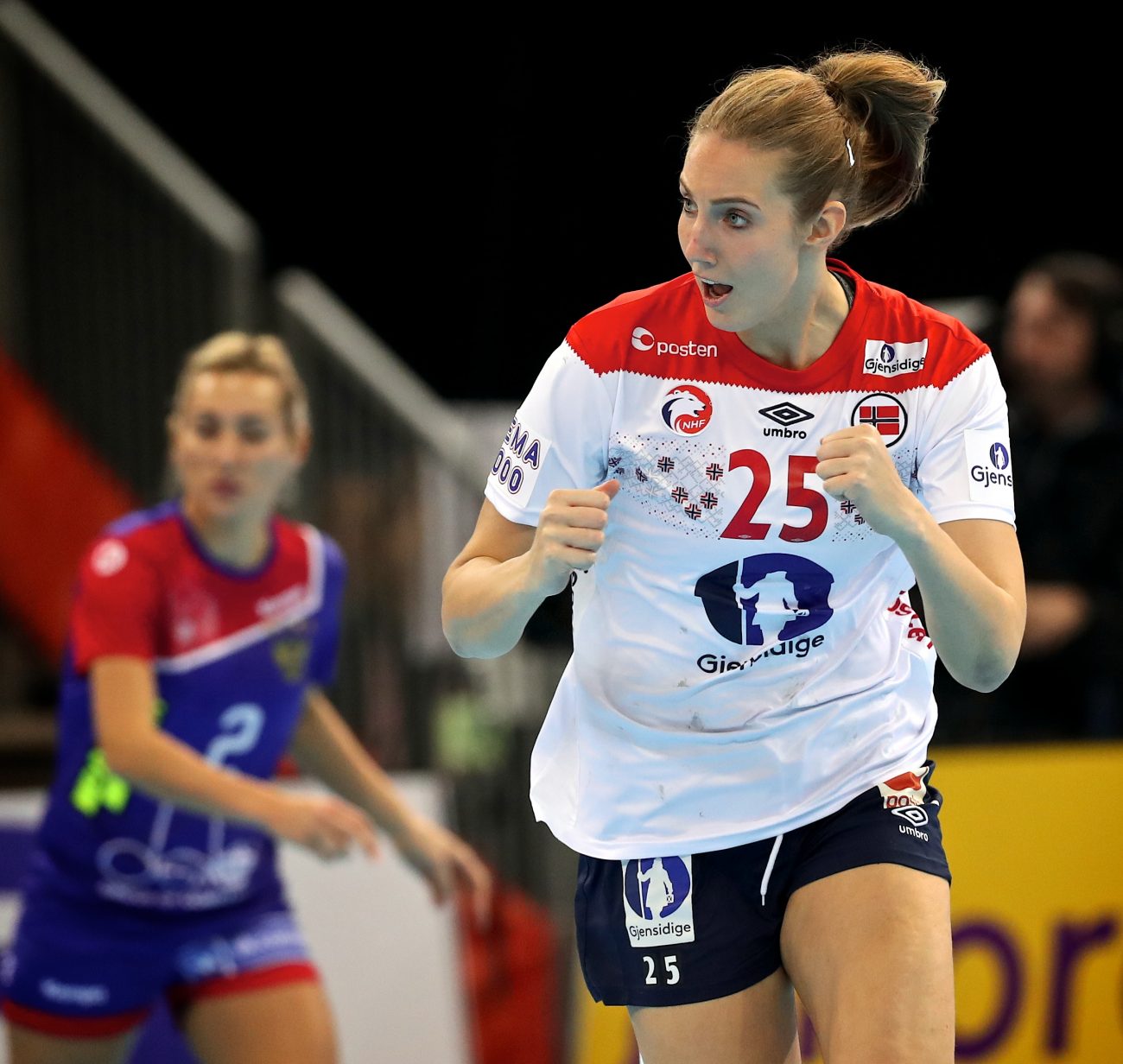 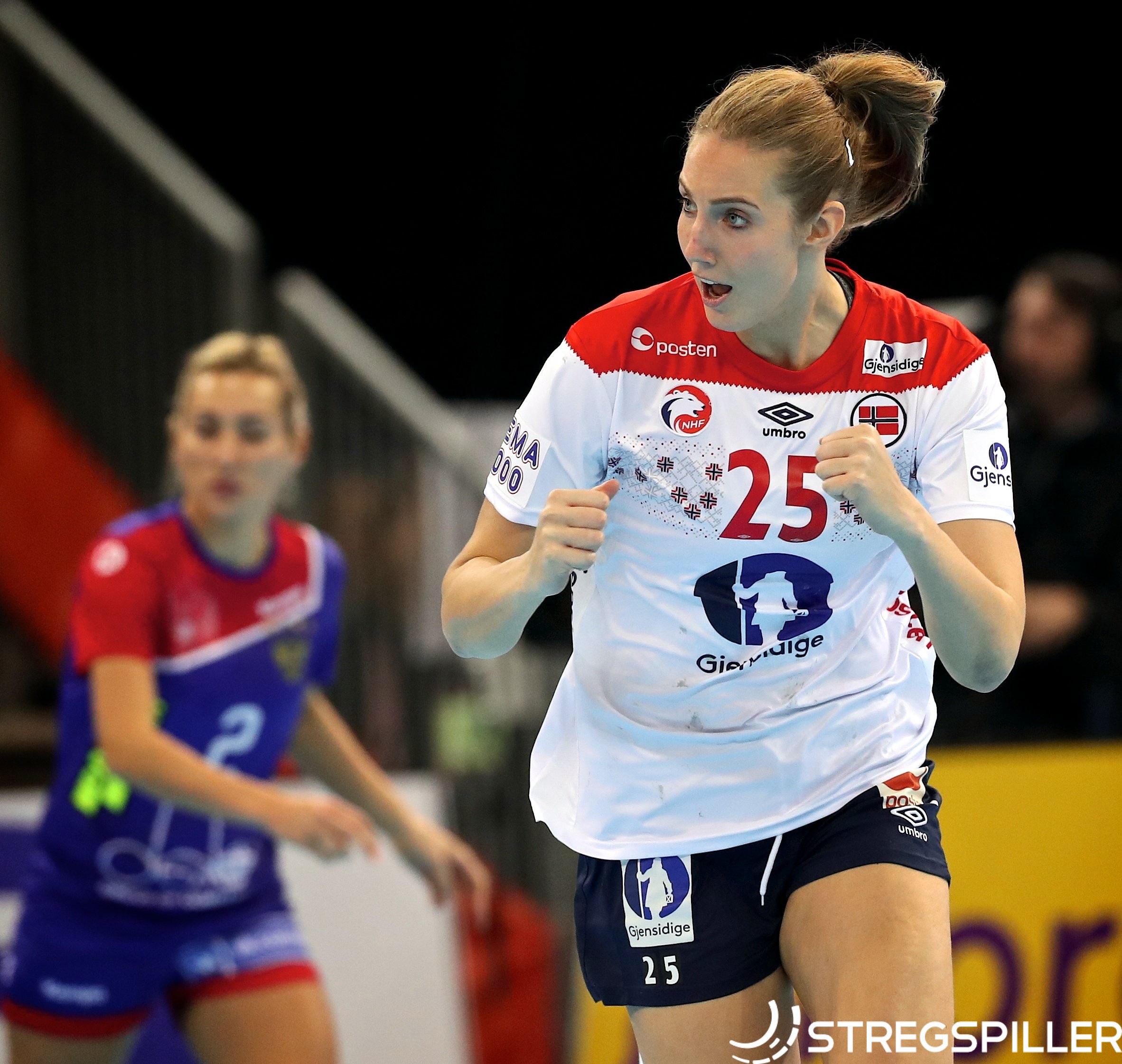 INTERIEW – Kristine Breistøl enjoys having qualified for the quarter-final of the DELO EHF Champions League with Team Esbjerg.

Now, the hard-shooting, Norwegian, back-court player sees a good chance to claim one of the two top spots in Group I and secure home court advantage in the second leg of the quarter-final.

42 goals of Kristine Breistøl are already an important contribution to the advancement of Team Esbjerg to the quarter-final in the Women´s DELO EHF Champions League with two matches left to play.

Especially, in the two main round matches against her fellow Norwegians from Vipers Kristiansand, the 193 cm tall left back had a significant impact, scoring eight times in each game.  On both occasions, Esbjerg walked away with the victory – 35:31 and 35:30.

“The last couple of seasons, I have been able to stay clear of injuries and this allowed me to focus and develop my game, and that’s what I did in Esbjerg.

“Esbjerg play a bit differently from what I was used to.  So, I needed some time to adjust, but I think I fit in more and more and I am increasingly contributing my own qualities,” Kristine Breistøl tells stregspiller.com.

She certainly has no doubt with regards to the reasons that explain Esbjerg´s enormous success in the DELO EHF Champions League, this season.  The team already defeated last year’s finalist, Rostov-Don. the star-studded team of CSM Bucuresti as well as Ferencvaros.

In addition, the club from the far west of Denmark achieved a remarkable 31:31 draw in Metz, in a match which they controlled for the better part of 60 minutes.

“We have so many, different options in our game and we can execute several defense formations, no matter who we meet and how the match develops,” she explains.

Even though Team Esbjerg have reached the quarter-final of the DELO EHF Champions League for the first time in the history of the club, the team has no intentions to stop there.

There still is a chance to finish first or second in Group 1 and the Danish champions are in charge of their own destiny.  Either rank will be advantageous as Esbjerg will avoid the two top teams from Group 2 – Györ and Brest Bretagne – and even more important, it will guarantee home court advantage in the second leg of the quarter-final.

“It’s cool that we are still in the fight for first or second position in such a tough group and with only two matches left.

“We probably will need points in both of those games, but as long as there is a chance to climb higher in the league table, we’ll obviously do whatever we can to accomplish it.

“Given the fact that we are already in the quarter-final, we should simply focus on playing good handball,” says the 26-year-old, who is playing her second season in Esbjerg after leaving Larvik in the summer of 2018 and where she is one of no less than six Norwegian players.

Esbjerg will play the remaining main round games on the road, against FTC-Rail Cargo Hungaria, this upcoming Sunday, and one week later, at home, versus Metz.

FTC – Esbjerg beat the Hungarian club 29:27 in the earlier main round match – are without chances to proceed any further in the competition.  Yet, Hungary’s “eternal number two” hardly ever loses in front of a fanatic home crowd.

Kristine Breistøl is very much looking forward to the encounter at the arena in Erd.

“I think it’s going to be a tough and exciting match.

“They have so many good players and there is no doubt that we will have to be well prepared.  And, we certainly can’t allow them to build too much self-confidence as the game progresses.

“It (Erd Arena ed.) is one of the coolest arenas to play in.

“Although, we know that FTC have nothing to play for anymore, we also know that they will do everything to win in front of their own fans.

“But, we also have a lot at stake and we’ll definitely do everything to win as well,” says Kristine Breistøl.