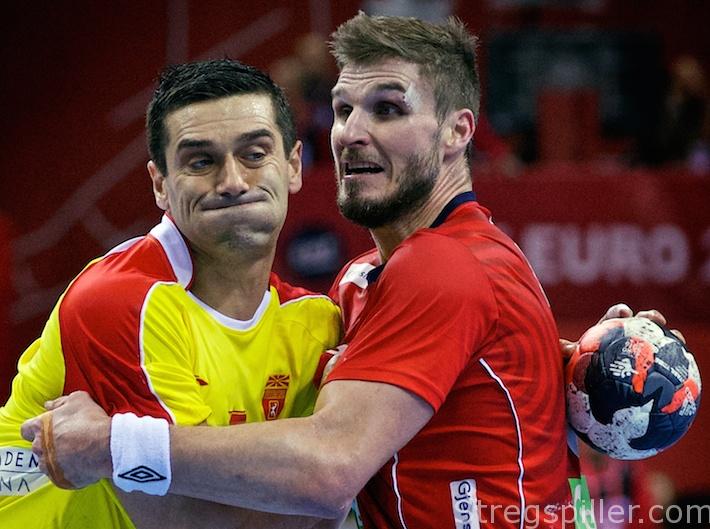 “We have the chance to create another surprise”

FEATURE – Skjern Håndbold – the Danish club located in a village with a population of less than 8,000 and an annual operating budget of about EURO 3.0 Mio. – has created one of the most unexpected surprises in handball this season, reaching the quarter-finals of the Champions League.

On a sleepy Sunday, back in the early 80ties, the intercity fast train made an exceptional stop in Skjern. The reason: Denmark´s most famous handball team at the time, Gladsaxe HG including star players like Morten Stig Christensen and Per Skaarup, was scheduled to play a Cup match against the third division team of Skjern GF.

Back then, the visitors lived up to their status as favorites and returned home with a clear victory, but it was the first time that “Handball Denmark” heard about Skjern – not for the last time.

In 1998, six years after Skjern GF and Skjern KFUM had merged into Skjern Håndbold, the team from the far west of Jutland were promoted into Denmark’s top league, and with former Danish international and Flensburg coach, Anders Dahl Nielsen, at the helm, they won the championship in their maiden season.  So far, it was the only time that Skjern went all the way, winning the Danish championship.

This year, they represent the Scandinavian country in the Champions League but only as runners-up in the domestic league in 2017. What makes their quarter-final berth even more sensational is the fact that they joined handball’s elite from the so-called “2. Division” of the Champions League – teams from groups C and D.

However, this is not the only amazing nugget in this fantastic handball odyssey, of the team hailing from the smallest town ever been represented in a Champions League quarter-final.

With a total population of a bit less than 8,000, Skjern is really not more than a village, and their annual budget of around 3.0 Mio. EUROs make them appear like a midget, when compared to the top clubs in European handball.

Still, they eliminated mighty Veszprém, the Hungarian handball powerhouse, with a two-goal win on aggregate, in the Round of Last 16.

“Champions League is our recess”

Skjern is only the third Danish club that ever made it to the quarter-finals in the Men´s Champions League.

Kolding did it in 2002, when they reached the semi-final, and again in 2003, followed by AG Kobenhavn in 2012 – their one and only appearance at the FINAL4, in Cologne – before falling apart.

“We discovered that we really played at the top level, especially in our home games against Motor Zaporozhye and Veszprém,” says Bjarte Myrhol, one of Skjern’s two players who have Champions League experience at this stage of the tournament, left wing, Anders Eggert, being the other.

“In the Danish league, we are under constant pressure to defend our status as number one and favorite of winning the championship.

“Whereas, in the Champions League, we can play free of any expectations, at least when we meet teams like Veszprém – being the underdog suits us very well.

“Obviously, it has unlocked a great deal of energy and it appears as if the Champions League is our recess.

“When I joined Skjern from Rhein-Neckar Löwen in 2012, I certainly did not expect getting so close to a FINAL4 ever again. But our recent success has translated in confidence and a feeling of security we did not have before,” explains the 35-year-old line player and Norwegian international who played in the FINAL4 with Rhein-Neckar Löwen back in 2011.  Skjern’s coach, Ole Nørgaard, has characterized Myrhol’s signing as the greatest ever in the Danish league.

Even though Skjern´s opponent in the quarter-final, HCB Nantes, are not as well-known as Veszprém, Skjern will continue to assume the role of underdog.

Certainly following the injury of right wing, Rene Rasmussen, last Saturday, when he tore his Achilles tendon during a play-off match against Holstebro.

The mishap will translate into a nine to twelve months break for Rasmussen who has been a crucial player in Skjern’s attack as well as defense.

Rasmussen, who had his debut for Denmark at the recent Golden League competition, in Norway, will be difficult to replace, as the club only has a 21-year-old and relatively inexperienced substitute for this position.

Veteran right back,Kasper Søndergaard, has played on the wing in the past, but for now coach Nørgaard has chosen Skjern’s other right back, Norwegian international Eivind Tangen, to occupy the vacant position.  The change has not been without problems, especially in defense.

“Of course, Rene´s injury is a big loss to our team at both ends of the court and we also lost a great teammate.

“It means that everybody must take on more responsibility and that all of us must move closer together.

“Nantes is the favorite against us anyhow, and I am not even sure that playing the second leg at home will make that much of a difference this time.

“It meant more in the past, but these days, usually there is no big difference between a win at home or away – it does not have much significance,” finds Bjarte Myrhol who can look forward to playing the return match in front of a sell-out crowd at Skjern Bank Arena, no matter how the first leg in France, on Sunday evening, will turn out.

Does he believe in returning to Lanxess Arena in Cologne six years after his first visit?

“What I do believe is that if we all reach our top level over the course of two matches once again, we have the chance to create another surprise.”