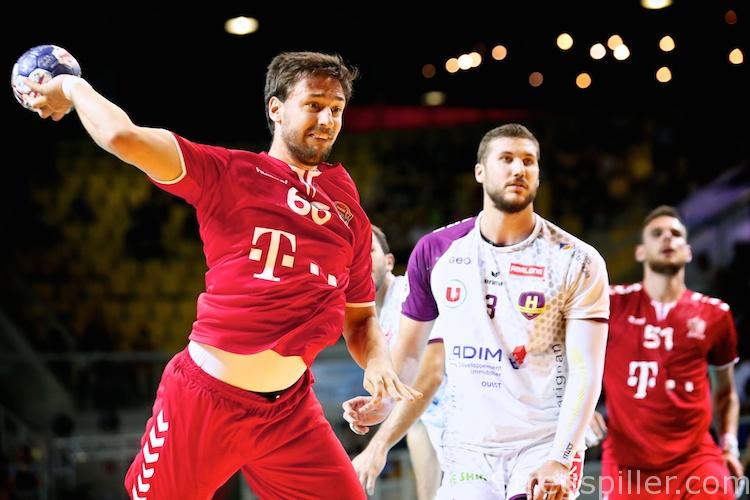 “We have to prevent Flensburg from running their fast-breaks”

INTERVIEW – Ahead of the VELUX EHF Champions League quarter-finals against Flensburg, Veszprém playmaker, Mate Lekai, speaks to stregspiller.com about the chances of his club against the German champions, Veszprém´s curse to win Europe’s premier club event, the ongoing rivalry with Pick Szeged and the shortage of domestic players in Hungary’s two top clubs.

It almost feels as if Telekom Veszprém KC is cursed, when it comes to winning the Champions League.  Despite several attempts, the ambitious club has yet to lift the prestigious trophy.

The epic 2016 final, when they were leading by nine goals against Kielce with 14 minutes left to play, ended in a penalty shoot-out that Veszprém lost.

Mate Lekai, one of Veszprém´s most experienced players remembers the dramatic final, in Cologne, all too well.

“Unfortunately, I have been part of two lost Champions League finals together with Veszprém, and the most painful one obviously was the most recent one (against Kielce, ed.), one of the biggest turn-arounds in Champions League history. Sadly, we were on the wrong side,” says the 32-year-old back-court player.  Yet, the defeat three years ago has not been the only painful Champions League experience.

Last year’s exit against Skjern, in the Round of  Last 16, still hurts as well, he admits.

“Naturally, we were all very sad after being eliminated by Skjern and from the start of this season, I think, it was on everybody’s mind that we had to erase that memory by doing much better this year.

“So far, we are among the top eight teams, but we still have to qualify for the FINAL4 – at the very least – to compensate for the 2018 knockout,” Mate Lekai tells stregspiller.com.

Goalkeepers and offense will decide

The hurdle that separates Veszprém from returning to the FINAL4 in Cologne, in June of this year, is the reigning German champion – SG Flensburg-Handewitt.

The Hungarian record champion will be visiting Flensburg for the first leg match, next Wednesday, before a final decision at Veszprém Arena, on Saturday, May 4th.

“Flensburg are one of the best teams in Germany. They won the domestic championship last year, and it was only two weeks ago, when they suffered their very  first defeat in the Bundesliga this season.

“They are in a good shape and they have a number of Danish players – players who won the 2019 World Championship, including one who will be joining us next season (Rasmus Lauge, ed.).

“In every game and especially in games that are evenly matched, goalkeepers and offense will be the most important factors.

“We must prevent Flensburg from running their fast-breaks as it is one of their biggest strengths.

“Instead we must force them into the established attack, playing six-against-six,” finds Mate Lekai.  who

Over the years, he has grown used to his team dominating Hungary’s domestic league, but lately, Veszprém seem to have lost their undisputed number one status.

In the 2018/19 season, Pick Szeged won the Hungarian championship and right now, the club is five points ahead of Veszprém, after succeeding in both league games between the two handball giants.

Has the balance of power changed for good in Hungary? Mate Lekai doesn’t think so.

“There is a long, historic rivalry between Szeged and Veszprém – and yes, they won three times against us this season – still, I think it’s too easy to claim that they are the better team from now on going forward.

“The two teams are on the same level. Last year, they won the championship and the Hungarian Cup, and for us that was painful.

“However, they only won the championship and the Cup once, while we succeeded in eleven championships and as many Cups, over the course of the last twelve years – so things are not that simple.

“For sure, Szeged have improved as of late. They have a great team and they may even go all the way to the FINAL4, in the Champions League.

“Obviously, our objective is to take the Hungarian championship, especially after not winning the Cup,” says Lekai, who between 2010-2012, enjoyed a two-year stint in Szeged himself.

“When I played in Szeged, it was a completely different club from what it is today. Different owner, different board, different coach and different players. Not one of my teammates back then is in the team today.  Therefore it’s not possible to make any comparisons between Szeged then and now.

“These days, I think, Szeged and Veszprém are both great brands and that’s good for Hungary,” finds Mate Lekai.

While the two Hungarian power houses, Veszprém and Szeged, have been at or close to the European top for several years, the country’s national team is facing a very different situation.

It has been a long time since Hungary were even near medals at a World- or European championship, not to speak about the Olympics.

Currently, Hungary top their qualification group for the 2020 European championship, but they were close to suffering their first defeat at home against Russia, last Sunday.  Only Lekai’s penalty shot, at the buzzer, earned them a 23:23 tie.

Mate Lekai has no second thoughts about Hungary’s lack of success on the national team level.

“There simply are less and less Hungarian players in the two best teams, who are good enough to compete on top level.  So, in my opinion it’s unrealistic to expect the Hungarian national team to do any better in the foreseeable future.

“I hope there are players in the youth system, who can develop and reach the necessary level, although I do not have clear visibility when talking about this matter.  In the near future, I don’t think it’s likely that the national squad can rise to the same level as Szeged and Veszprém,” he says

If that’s true, Szeged and Veszprém will have to continue defending Hungarian pride, in men´s handball, for years to come.

Right now, they can do so by qualifying for the VELUX EHF Champions League FINAL4.  As a matter of fact, one of the clubs may even win the competition.

“We have as good a chance succeeding this year, just as we had in so many other seasons in the past.  But, I could say the same about six other teams and it would not surprise me if they’ll celebrate victory in the end.

“As I said before, to us the key to reach the FINAL4 is to stop Flensburg from running their fast-breaks,” concludes Mate Lekai.