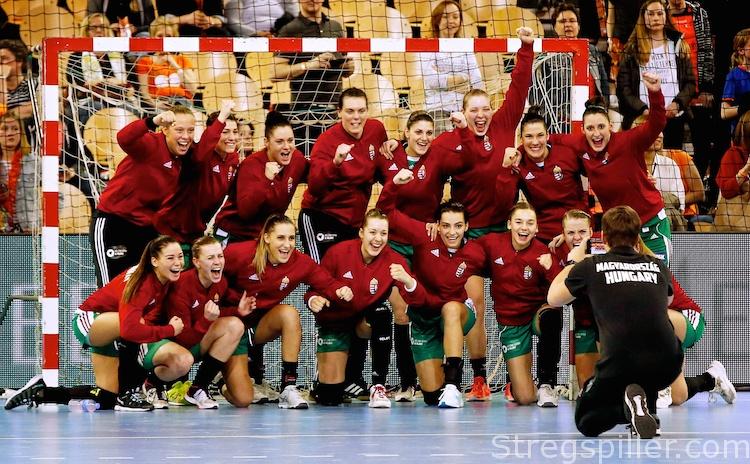 In this interview, the 26-year-old left wing is fully aware that the quarter-final is still a far away dream, not to speak of a FINAL4 appearance.

Schatzl was one of FTC’s players, who hurt the ambitious visitors in particular, at Érd Arena, last Saturday.

“We expected a tough match as we knew what their players are capable of, and we were especially aware of their ability to include their line players.

“As the match progressed, however, we seemed to be able to do more or less what we wanted. We played on a very high level in attack as well as in defense,” Nadine Schatzl tells stregspiller.com.

She is not particularly keen on talking about her own fine performance.

“I tried to do my best, of course, but I should thank my teammates for so many great passes.

“It was part of our plan to use our wing players a lot and I am happy that it worked successfully,” she says.

The win was badly needed for Schatzl and her FTC teammates, as they entered the main round on one point only after their group matches.

At the moment, they are still sharing the bottom position in Group 1 together with CSM Bucuresti.

Both teams are currently on three points and even though fourth position – the rank will give access to the knockout phase – is only two points away, Nadine Schatzl realizes that the quarter-final is still a distant goal, not to speak of a FINAL4 appearance.

“First of all, we have to pay attention to ourselves.

“We are certainly not favorites to reach the quarter-finals, but if we can succeed in a few more matches, the possibility is still there, of course.

“Right now, the next game is the most important one to us. If we can win that one, we can check the standings in the group again and see where we are,” as she puts it.

Traveling to Esbjerg feeling no pressure

The next match, she is referring to, will be on the road against Team Esbjerg, on Sunday.

Just like FTC, the Danish champions opened the main round pulling a surprise, when they won the Scandinavian derby against Vipers Kristiansand (35:31).  The victory sent them to second place in the group.

Esbjerg, who already defeated CSM and Rostov Don, are coached by former Danish international, Jesper Jensen, the current front-runner for the job as Denmark’s next national coach.  Nadine Schatzl is prepared for a tough fight on Sunday afternoon, in Denmark.

“Esbjerg has really good and tough players and they have a young and very good coach.

“However, we do not feel any pressure before the match and we obviously will go for a win.  If we can play as well as we did against CSM, anything is possible,” finds Nadine Schatzl, who was born in Munich, but moved to Hungary with her parents at the age of 10.

While Györ and FTC have done extremely on Europe’s biggest handball stage for many years, Hungarians are still waiting for their women´s national team to reach the same level.

As a regular in the national team, Nadine Schatzl is the right person to ask, when to expect Hungary at the top in Europe?

“First of all, I think FTC can be proud as we are the club representing the backbone of the national team.

“Right now, there are many young players in the national team, who do not have enough international experience, yet.

“But, I do think that in two or three years, we could have a great Hungarian national team.

“These days, I focus on FTC and right now on the match in Esbjerg, in particular,” says Nadine Schatzl – a player, who Esbjerg’s defense should watch out for.