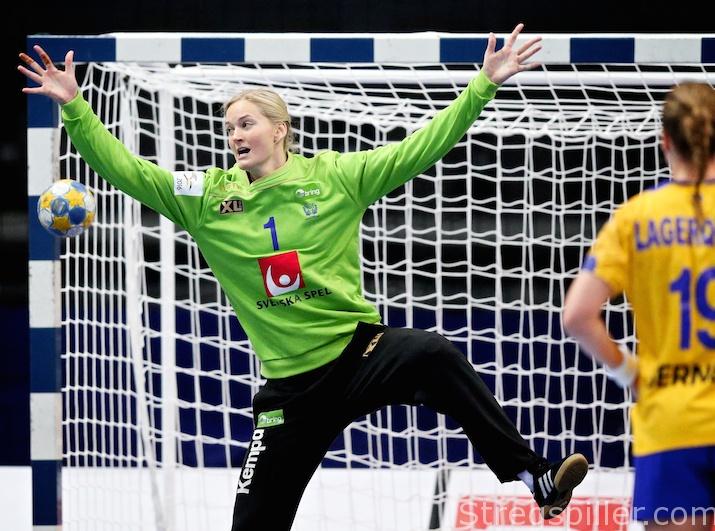 “We know we are important”

INTERVIEW – Johanna Bundsen knows that she and her goalkeeper colleague, Filippa Idéhn, will be crucial to Sweden’s success at the 2017 World Championship, beginning in Germany in just a few days.

Usually, it has been European championships where Sweden has been successful in women´s handball.

The best achievements came in 2010, when they won the silver medal, and in 2014 taking bronze was a positive surprise as well, whereas Sweden’s performance at EURO 2016, on home soil, turned into a disappointment.

Johanna Bundsen is one of the players who took the bronze medal at EURO 2014 in Hungary and Croatia nearly three years ago. The 25-year-old goalkeeper hopes that the upcoming World Championship in Germany will be the occasion, when Sweden’s national team will leave their mark at a World Championship.

“I hope we can play a fine championship, of course.

“You are right – we have not been particularly successful at World Championships in the past, but we are really keen to reverse course,” Johanna Bundsen tells stregspiller.com.

When looking at Sweden´s preliminary group, playing in Bietigheim-Bissingen in the south of Germany, it’s not easy to find reason for optimism.

Their opponents in Group B include mighty Norway – the top favorite for the title – as well as Hungary, a squad back at full strength, Poland, Argentina and the Czech Republic.

Sweden´s national coach, Henrik Signell, did not hesitate to characterize the group as the “toughest one possible” as soon as he saw the results of the draw.

Johanna Bundsen is not particularly frightened before it all begins.

“Of course, it is a tough group, but we simply have to take one match at a time and see where it leads us.

“In fact, I think it can be quite close at the top of the group,” she expects.

Filippa and I will have to do well

It is a well-established fact that a good goalkeeping duo is essential to any successful handball team. In Sweden´s case, the expectations in their two goalkeepers are well founded.

Johanna Bundsen and her former teammate at IK Sävehof, Filipp Idéhn, are both goalkeepers performing at a high international level, and they will simply have to do well, if Sweden is to go deep into the tournament, in Germany. And Bundsen knows it as well.

“It is clear that we have a big role.

“As we all know, goalkeepers are always important, and as Filippa and I have both participated in several championships already, we obviously have some experience, which will be critical.

“However, as a goalkeeper, you always have to depend on a good defense as well.

“I think that’s what the Swedish team has. And if defense and us goalkeepers do our job well, I think it can become a really good tournament for us.

“Filippa and I work very well. We played together in Sävehof for several years, and we have been together in the national team for quite a number of years now as well.

“We know each other very well, and that’s a big advantage for our team.

“Of course, the other teams at the championship have great goalkeepers too, but I still hope that Filippa and I can make a difference.”

Until the 2017/18 season, IK Sävehof was a regular participant in the Champions League, but over the summer break, Johanna Bundsen moved abroad, for the first time in her career. Now, she plays for Denmark’s 2016/17 runners-up, Kobenhavn Handbold.

It left Filippa Idéhn – she now plays handball at Brest Bretagne – as the only Swedish goalkeeper in the Champions League.

“I do not feel that my level has dropped by not playing the Champions League anymore.

“Of course, I miss the Champions League, but with Kobenhavn, I play the EHF Cup, and there opposition is of high quality too.  The same goes for the Danish league, where we feel the pressure in nearly every game.

“I have joined a very good club, an organization that takes handball serious, and where I get a lot of court time.

“I also benefit from opponents being more equally matched – it’s more challenging than playing in the Swedish league.

“There is also a much faster pace in the Danish league, and that’s probably the biggest difference between the two leagues.  So, all in all change has been really good for me.”

While most experts expect Norway to take another title in Germany, Johanna Bundsen sees the championship more open.

“It is hard to say who will win in the end. I think at the top it will be very close. And the way I see it, there are probably 10 or even 12 teams that can win.

“It’s also hard to say if we are one of the teams that can take a medal.

“First of all, we focus on the group phase, where it is all about getting as good a position as possible before the knockout stage.

“Of course, Norway have an extremely good team, and they have so much experience playing the big tournaments, that they are obviously among the top favorites.

“In Sweden, we can only look across the border with a bit of envy, realizing that we probably still have a rather long way to go, before we reach their level.