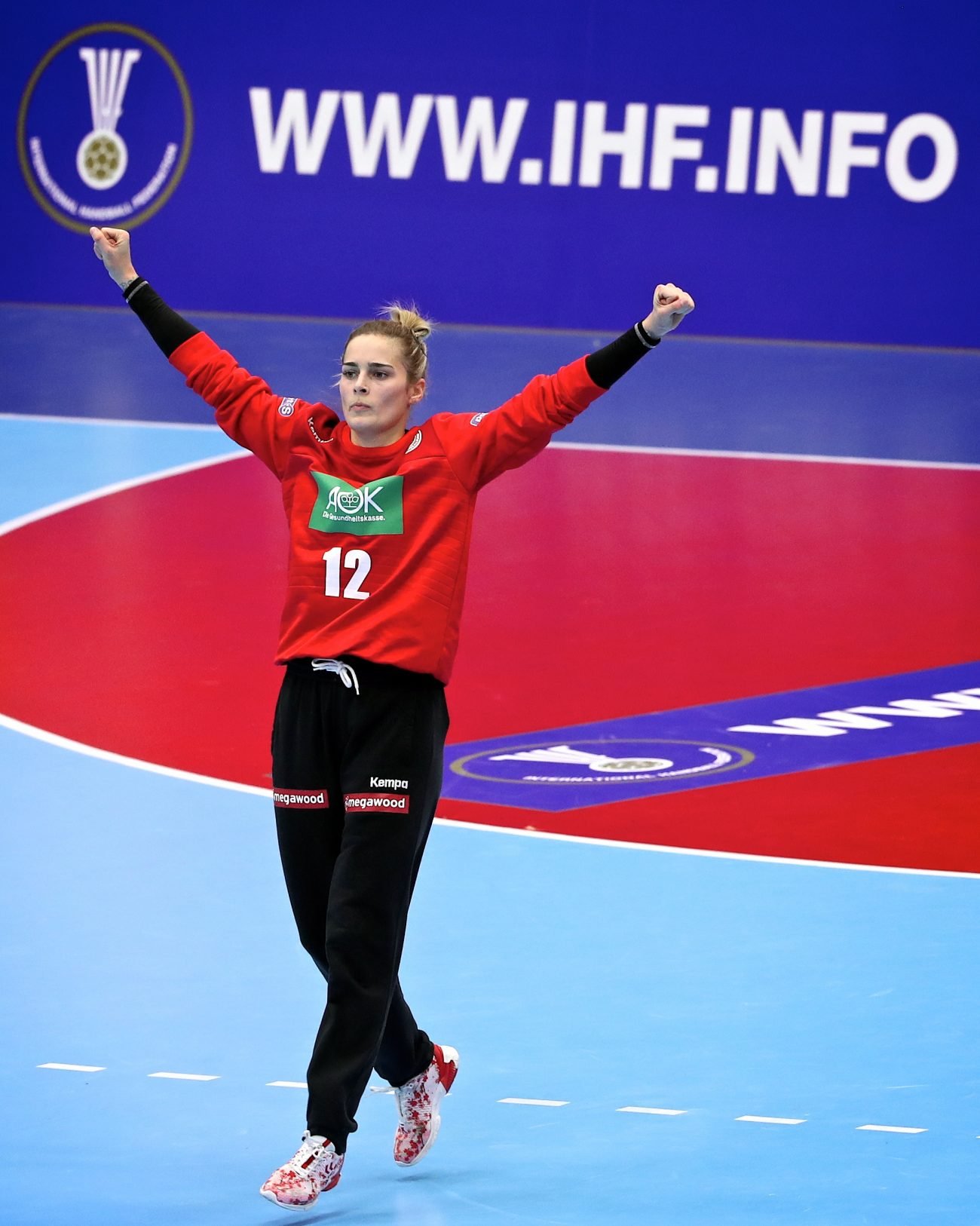 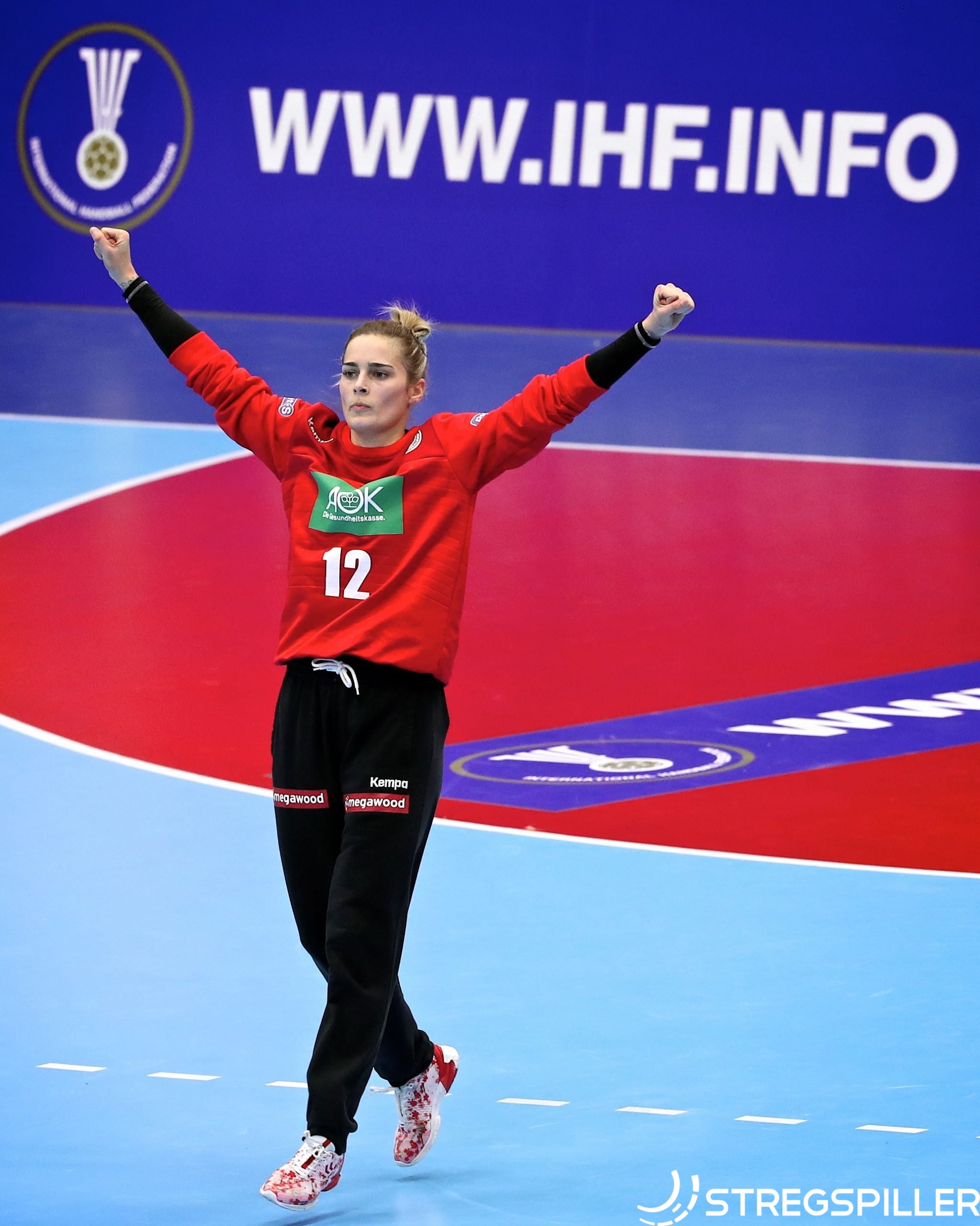 “We must be able to force the issue!”

December 14th, EHF EURO 2020, Group II – Germany trail the Netherlands by one goal in Kolding’s “Sydbank” arena. With five seconds on the game clock, German goalkeeper Dinah Eckerle launches a precise, long-range pass across the field into the hands of teammate, Marlene Zapf, who could not convert – unfortunately. A draw would have send Eckerle & Co. to the final round in Herning.

It were performances as described above and spectacular saves in games when it counts most that caught the attention of Europe’s top handball clubs and which would send the German international on a journey across  the continent in the 2020/21 season.

At the time Eckerle’s future looked promising and in line with her own aspirations, but then came Covid-19 and the pandemic which followed changed much if not everything of her plans for the upcoming season.

In this interview, Dinah Eckerle talks about her voyage, which would take her from the banks of lake Balaton, via Metz to the west coast of Denmark, where she recently signed a two-year contract with Team Esbjerg starting in the summer 2021, as well as her assessment of Germany’s achievement at the women’s EHF EURO 2020.

stregspiller.com caught up with her in Metz, where she’ll be facing a tight match schedule in the month of January. Did she find the time to settle in and adjust to her new surroundings, yet?

“I am doing well – even though January will be a bit stressful given the many games and plenty of practice sessions in between.

“Right in the beginning after I joined, it was a bit difficult as I came into a team in the middle of the season, but the girls welcomed me with open arms. At this point, I feel really good about everything here.”

From Siofok to Metz

Of course, a stay in Metz with the French record champion was not in the plans prior to the 2020/21 season as Dinah Eckerle openly admits.

“Correct – the original idea was to play two years in Siofok, but given the current situation it could not have worked out any better for me. Now, I am here (in Metz ed.) and that’s really great.

“The president of Siofok and I agreed to sign the termination agreement with immediate effect and that’s the reason why I was able to join another team on such short notice.

“Given the circumstances in Siofok it became quite clear that I would not stay with the club. This situation coincided with the injury of Ivana Kapitanovic (goalkeeper in Metz ed.) and the club’s search for a replacement keeper. It all worked out very, very quickly. Within two or three days I packed my belongings and moved from Siofok to Metz.

“Even without the opportunity in Metz it was clear to me that I would not stay in Siofok. I told myself that I would not stick around, although I didn’t know where I would end up next.   The termination of my contract happened before I knew that Metz would become my next destination. It was a risky decision for me and back then I was fully aware that I could be without a club until EURO 2020.”

As Eckerle mentioned, her unfortunate situation in Siofok coincided with the bad luck of another goalkeeper. At the time the German international came to terms with Siofok’s club management, Ivana Kapitanovic tore her cruciate ligaments. The severe knee injury of the Croatian international opened the door in Metz.

“I think just a day or two after severing ties with Siofok and the injury of Kapitanovic, my agent was in contact with the president of Metz. It all happened so quickly and led to a rather rapid departure in Siofok. One week later, I found myself in the arena, in Metz.”

Joining another team in the middle of the season almost always presents a challenging situation. How did Dinah Eckerle experience the first few weeks in Metz?

“It was not too difficult. The club took really good care of me and the girls are super. On the flip side, I am not a person, who walks into a room and tries to draw all the attention, so to speak. It took me a moment to get used to the new situation, but the girls really made it easy for me.

As Metz is not just some run-of-the-mill club, but an organization with a rich and extremely successful handball history, ambitions are elevated and the current season is no different. The German international is fully aware of the lofty goals.

“Yes – the club is used to success and, of course, Metz wants to win the national league and the cup this year as well. This goes without saying.

“At the same time, all options are on the table in the Champions League as well, especially after our win at home against Rostov-Don. All in all, we are very well positioned for our next games and the following phase of the competition.”

Jumping to the signing of a two-year agreement with Team Esbjerg as of July 1st, 2021, was it clear that her spell in Metz would end after six months?

“Of course, I did not exclude staying beyond this season. Currently, I am a player in Metz and when I am under contract, I take the position that the club has the right to talk to me first with regards to a possible contract extension. But, Metz signaled early on that the engagement will be for six months only, to keep the door open for Kapitanovic.

“I – on the other hand – was looking for some clarity with regards to next season, knowing that clubs are in a difficult position to sign new players. Especially now, when considering the uncertainties driven by the Corona pandemic.

“I wanted to decide as soon as possible and establish a secure situation for next season. Next came the offer from Esbjerg and it did not take me long to conclude that I would sign with them.”

Given the uncertainties caused by the Corona pandemic, Team Esbjerg seems to be in the fortunate position to plan ahead and execute contracts with other high profile names like Norway’s Henny Reistad. How does Eckerle rate her new employer?

“It’s a club that’s not dependent on one large sponsor, but many smaller ones. That, I believe, is a real advantage in the current environment. The financial situation appears to be very secure given the well-diversified support structure.

“To me it was clear as soon as the offer was presented. I did not have to think very long about it. The only odd aspect was that I was getting ready to sign a contract with yet another club, so shortly after my arrival in Metz.

“That was a moment when I had to pause for a couple of days, just to put the past months in perspective, as I was looking back at a very tumultuous period in my life.

“I needed to take a deep breath before deciding on how things will move forward as of this summer.”

This season Team Esbjerg have been struggling in the DELO EHF Champions League and currently rank 6th of eight teams in Group A. Still, Dinah Eckerle has high expectations for a variety of reasons.

“I certainly do hope that Esbjerg will play in the Champions League next season and I think they are in a good position, considering their standing in the Danish league at the moment. (Currently, Esbjerg ranks first with three teams on equal points – ed.).

“But, no matter what, next season we will have a very exciting team in Esbjerg. I am especially happy about the signing of Reistad – for me a top transfer. Something I did not know about ahead of time and did not expect.

“We will have a very powerful backcourt and excellent wing players. It’s true that the team has struggled a bit because of Polman’s injury and another pregnancy (Line Jorgensen ed.). But, next season – assuming everybody is fit – we will be able to play a significant role in the Champions League, in my opinion.”

As Dinah Eckerle’s 2020/21 roller coaster ride will come to an end in Esbjerg, she has managed to keep the focus on handball. In fact, during the pandemic the sport has provided some stability as she points out.

“I have my daily training sessions and I play matches every Wednesday and Saturday, right now. I do see my teammates and therefore have my social contacts – it’s the best situation given the dire circumstances caused by Corona. All in all, it could be much worse.”

Corona – a part of life

Speaking of Corona – the bubble concept during the EHF EURO 2020, where teams, officials, staff members and select media representatives were isolated in dedicated hotels, worked well as Eckerle agrees.

“I think Corona has been effectively dealt with during the European championship back, in December. As far as I am concerned, the Danish organizers did an excellent job and I was truly surprised that Covid was not such a big topic while the tournament was in full swing. Of course, we all got tested regularly inside the “Bubble”, but as I said, it wasn’t a big talking point among my teammates.

“For me it (Corona ed.) has become a part of life, for now. I get tested twice a week and I know that all my teammates in Metz are negative. “

“We must be able to force the issue!”

When talking about the sporting result at the EHF EURO 2020, Dinah Eckerle acknowledges the rocky performance of Germany’s national team and addresses one shortcoming in particular.

“We experienced some ups and downs – once again, I have to admit. Something we have seen in the past few years in every tournament. It’s true that throughout the preliminary round it was a bumpy ride, but we did reach the next stage. That was our goal.

“In the main round we had a good start with the win against Hungary, but we could not carry the momentum into the next two games (against the Netherlands and Croatia ed.), which I find  very sad.

“Looking back over the past few years, we often needed only one or two goals to reach the final round, but at the same time we have to ask ourselves, why is it that we always need ‘just one goal’ to reach the semifinals?

“In situations, when the game is on the line, we must be able to force the issue no matter who the opponent is and turn a match in our favor. Once again – we did not have this quality.

“It is very important that in the analysis of the last championship we all come to the same conclusion and that we address it in our next team meetings.

“On a daily basis, we have to work harder in our respective clubs, otherwise we won’t make any progress. This is obvious, when looking back at past tournaments.

“Too many times we missed a better result because of a couple of goals and it cannot be excused by claiming bad luck because a deflected ball didn’t bounce back into our hands, for example.

“Our team does have the quality to force the issue – I am convinced. But, we have to deliver during crunch time to join the fight for medals.

“But, I am of the opinion that Germany is up for a surprise this year. They have plenty of young players, who are eager to present themselves on the international stage – they could produce a good result.

“This aside, I expect Denmark to be among the medal contenders and France will have a competitive team as well, I think.”