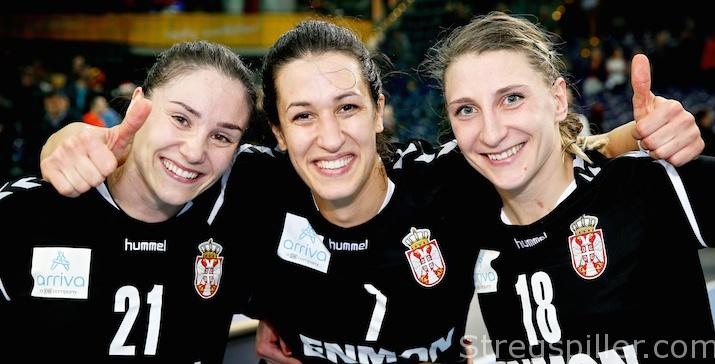 INTERVIEW – Last year, Serbia made it to the Round of Last 16 at the Women´s World Championship, in Germany.

The team´s brightest star, Andrea Lekic, hopes to improve and top the 2017 achievement at EURO 2018. She is confident and sees a realistic chance for Serbia to take the next step, as she reveals in this exclusive interview with stregspiller.com.

The World Championship 2017, in Germany marked the reunion of some of the most talented players in women´s handball in Serbia, after a long break from the national team – for various reasons.

Andrea Lekic and Dragana Cvijic were among the more prominent protagonists who returned and qualified for the Round of Last 16, back in 2017. On that occasion, Lekic did not hide the fact that the 2020 Tokyo Olympics were incentive enough to come back and represent the colors of Serbia.

“I hope this European championship can mark a turning point en route to the Olympics. But, first of all, it is a question of qualifying for the next World Championship, as the road to the Olympics is a bit more complicated.

“However, there is no doubt that the Olympics are my ultimate goal. Thereafter, the Serbian team may have to re-build around younger players.

I don’t know – and I do not even know yet, if I will continue after the Olympics,” the 31-year-old playmaker tells stregspiller.com.

“Trying something new is always good”

Before this season, she and another key player of Serbia’s national handball team, line player Dragan Cvijic, moved from Vardar Skopje to CSM Bucuresti. And despite a turbulent autumn, Lekic is still happy with her transfer.

“Change is almost always good for me.

“In general, it’s great to try something new, and I also feel that this particular change has worked out well for me, as I still have the opportunity to play with Dragana (Cvijic, ed.) – it’s a great advantage for both of us.

“Of course, we’ve had some ups and downs at CSM during the fall, and getting a new coach will always cause some turbulence. But, I think we’ve handled it well and got out stronger on the other side.

“After all, we managed to win our Chmpions League group and we take six points to the main round.

“To me, it was a perfect way of ending the group phase before joining my national team. At the moment, my form is good and I feel great – I am very content and optimistic,” she says.

The toughest group ever

“I am also quite upbeat on behalf of my team, although we already ran into injury problems. Marija Obradovic (left back, ed.) has torn her cruciate ligament, but this aside, things look quite good,” says Andrea Lekic who was satisfied with Serbia’s performance at the World Championship, last year.

“We went on from our group and reached the Round of Last 16, where we lost to Montenegro who played a very fine tournament.

“The way I see it, we have to pick it up where we left off in Germany,” says Lekic who looks forward to meeting Poland, Sweden and Denmark (in that order) at the group stage of EURO 2018, in France.

“I have seen what Poland did in the Golden League, in Denmark, in the fall, and it impressed me a great deal.

“The game against Poland may very well turn out to be our key match in this group. But, I do think, that we have a good chance against them.

“Actually, Sweden may be the strongest team, but we know them quite well and this may be an advantage for us.

“Denmark play a lot like Sweden – a traditional Scandinavian style of handball including a lot of running – something we have prepared for.

“In fact, I think all four teams have equal opportunities, but it will be crucial to carry as many points as possible to the main round. At this stage of the tournament, I consider our potential contenders as the toughest group of teams ever at a European championship,” as she refers to the reigning World Champion, France, the Olympic champion from Russia as well as Montenegro as the most likely opponents in this phase of EURO 2018.

“A European championship is always more difficult compared to a World Championship, as all the teams are very good, but this group, I mentioned before, will be particularly strong,” finds Andrea Lekic, who will meet her club teammate, Jovanka Radicevic, if her predictions come true.

“We always joke a bit about it, when we meet. The last time, in the Round of Last 16 at the World Championship, she and Montenegro beat us. Let’sd see how it turns out this time,” she says.

She is a bit in doubt when trying to define what “success” will have to translate into for Serbia, at this European championship.

“Of course, we all are still dreaming of 2013, when we reached the final at the World Championship, at home. At least, I do.

“It would be easy for me to say that we are going for another medal and maybe that’s possible, but first of all, it’s key to stay on the path that leads to the Olympics.

“In fact, I would not like to say much more about our chances until we have played our opening match against Poland.

“After the game, we can talk again,” concludes Andrea Lekic.