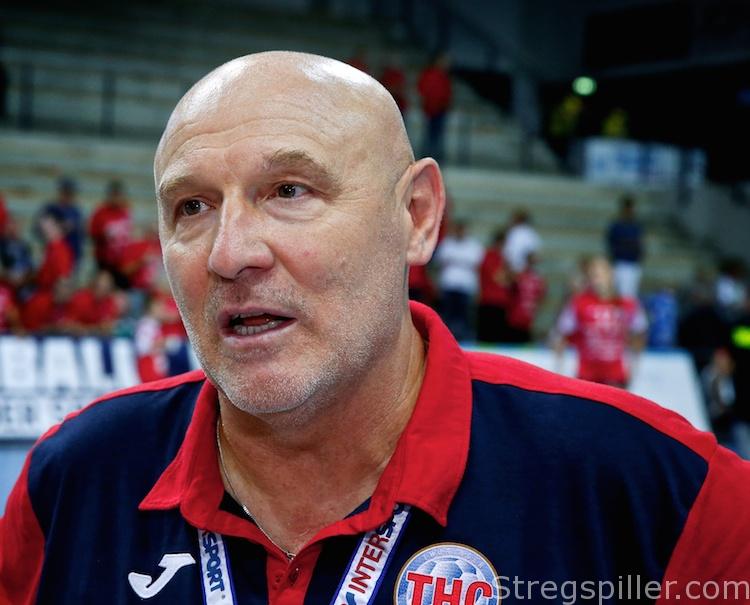 “We thought we were closer to the best teams”

INTERVIEW – It’s been a rough start to the new EHF Champions League season for Thüringer HC. On Monday, the German club lost their fourth match in as many attempts, against defending champion, Györ, although the final result (31-28) was a massive improvement from the 16-goal loss in the first game against the Hungarians. I talked to the charismatic head coach, Herbert Müller, about his club’s state of development.

Your team is doing well domestically, but in the Champions League you have lost all your matches. What’s the reason for it?

HM: Inexperience! Kerstin Wohlbold has retired – she was our true leader. Also, Beate Scheffknecht is not with us right now; she got a ton of Champions League experience as well. Our young talents still have to pay their dues on the higher level. You can also see the differences in the physical aspects of the game between our team and the best in Europe.

Especially in the game against Györ, when you lost by 16 goals, it must have been very unnerving for you?  Actually, I can’t remember having seen a similar game of a THC team, led by you, in the Champions League?

HM: It’s not only the inexperience, but sheer will power to fight until the very end. Our new players – we got eight of them – still have to learn how THC plays. It’s a big change. Some need time to adapt others lack that kind of mentality. All of them are trying, but as a team it’s not working yet.

Your have placed high hopes on Emily Bölk when you signed her. It seems she still needs to adjust to the intensity and the level of the Champions League. Twelve goals in four matches is below her standards…

HM: Yes, for sure, but it’s a learning process. When we played in the Champions League for the first time, eight years ago, we also couldn’t win games. It takes time – it’s a long process, which hopefully will help the national team in December, at the European championship or us next year. We thought we were closer to the best teams and we saw a realistic chance to fight for second place in the group stage, but some of the players still have to find their roles.

Alicia Stolle, meanwhile, is another young and talented player who just joined this summer. She also plays in central defense. Do you see her in this position just temporarily?

HM: No, it’s not just a short-term solution. We try to work with both Emmy (Bölk) and Alicia (Stolle) in central defense. It takes some time, Alicia never played there before. She needs more time to reach the level to compete in the tough matches in the Champions League.

You mentioned that you lost some key players as well as veteran leaders, like Kerstin Wohlbold or Beate Scheffknecht – both have been with the club for a long time. Are players like Bölk or Stolle able to replace them in the leadership department?

HM: It depends. Some players just don’t bring that fighting spirit to the table. Then it requires more time. Others learn much quicker. I also have to admit that some might never learn it. I don’t want to mention names, but generally speaking, it’s not easy when you are dealing with eight new players. I just hope it will happen fast enough, because they will also need it in the national team. We thought it would be easier, but I know all of those players have quality and lots of talent. We have to be patient, which is not easy these days.

For you as a coach it must be frustrating to see some of your best players leave every summer? How do you find the motivation to move on and try again?

HM: Just recently Dinah Eckerle, left us and now another team is benefiting from her great development over the past couple of years. But that’s the way it is. However, I find my motivation when I look at players like Emily Bölk or Alicia Stolle. I love to develop such talents and bring them closer to the highest possible level. They have the skills, they are working really hard and I got the feeling right away, that they really want to go far. That’s the reason I’m a coach at this club.

Do you see any realistic chances to somehow save your international season?

HM: It can still turn out to be the best-ever international year for us. I always said that German clubs maybe better suited for the EHF Cup, but that doesn’t mean that we won’t try our very best to make it to the main round (of the Champions League ed.). But who knows, maybe our path will be a different one this year, and possibly a more successful one, in the overall scheme of things.

Anne Hubinger did not make the German team for the upcoming European championship. She has only played some matches early on in the season. What’s her current status? She was supposed to be a key player for you and the national team?

HM: I remember that she was doing extremely well (nine goals per game) when she first joined us before last season, but then she suffered that freaking injury when she was with the national team. It was a pleasant surprise when the doctors allowed her to join us for training camp in the summer. But then the pain came back and now she has problems just walking. Although, she is not training with us at the moment there is no light at the end of the tunnel. Competing at EURO 2018 was unrealistic at the time when we took her out of daily training, anyway. We need to be very patient with her.