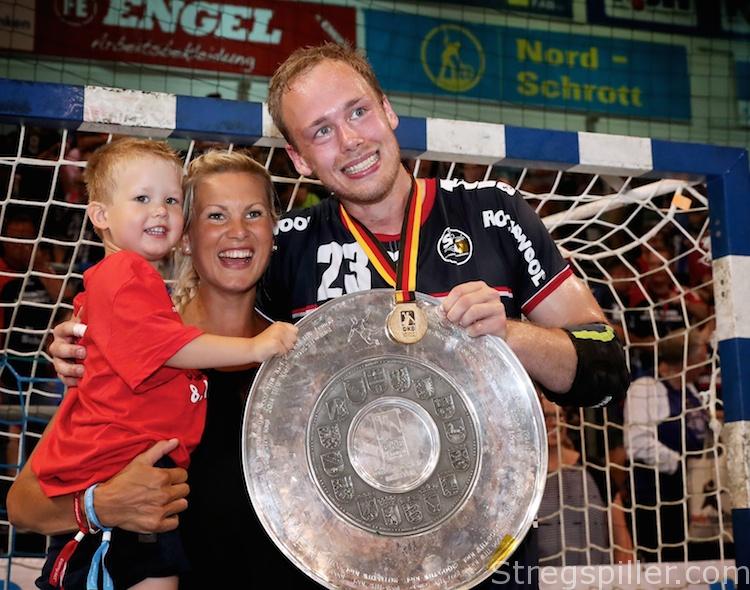 INTERVIEW – Some say it’s mandatory – you have to have two Danish players wearing the Paris jersey at the same time. With Mollgaard left, lineplayer Henrik Toft Hansen has joined PSG over the summer.

After a narrow Champions League win on Saturday in the first leg (29:28), Toft Hansen and his teammates will travel to the north of Germany, on Tuesday.  A perfect occasion for the Danish national player to talk with us about life in Flensburg and why he decided to move on.

Six wins in as many games in the 2018/19 Champions League campaign, can we call it a perfect start?

HTH:  It’s a tough group – we’ve played a lot of difficult matches, like the one against Pick Szeged, for example.  You can mention any of the previous ones, as well.  It can always be better but we got maximum points in the Champions League and that’s the most important thing for us. We want to finish on top of the group and we’re on track.  Still, there are plenty of hard games coming up – we’re not there yet.

Szeged was one of your first matches without Nikola Karabatic, do you miss him on the pitch? Or do you think that journalist are making too much of it?

HTH:  He’s a very good handball player – no doubt about it. We’re going to miss him on the court – after all we’re talking about one of the best (players ed.) in the world. Hopefully he’ll get back before the end of the season. The other guys in the team have to take on more responsibility and we saw it in the games we played without him already. I think we’ll do very well until he comes back.

Is there one memory that stands out from your three years in Flensburg?

HTH:  Of course, the last game in Flensburg when we won the Bundesliga and the whole town went nuts. Keep in mind, the club did not win the Bundesliga championship for the past fourteen years. It was special for us players as well because in the years before, we had several opportunities to win the trophy, but we didn’t play well enough. But, this time we did it, and it felt like a huge pressure was lifted. It was not a pretty game – handball-wise – but we succeeded ; it was a complete relief. For three years, I had to wait for this moment but some of the other players, like Thomas Mogensen, the wait time lasted ten years ! It was a great day.

How do you explain that so many Danish players spent ten years or more in Flensburg without feeling the need to play elsewhere?

HTH:  One reason, I think is because Flensburg is very near the Danish border. You can stay in Germany and still go and have a coffee somewhere in Denmark. Secondly, people are very nice and so is the environment. You can hear some people speaking Danish in the streets of Flensburg and you walk around and not get the feeling that you live outside Denmark. It also is a real family-friendly town and the people are just so fond of handball. I think that’s the main reason why Danish players don’t move. You play with a very good team and life outside handball is great as well. In Flensburg, I spent three fantastic years.

Considering the emotional side of the sport – was it tough to leave?

HTH:  Yes it was. As I said, I enjoyed three outstanding years over there and I built a lot of friendships, not only in handball but in everyday life as well.  Going to France was a big step for me, as I am now further away from my family in Denmark. It was difficult but it helped leaving on such a high note – winning the Bundesliga.

Is Paris anything you expected it to be?

HTH:  Yes – I had visited Paris with some other clubs. It’s a big city, there are plenty of things to see and the handball team is outstanding. Here, we have excellent players and want to win every single game and every trophy. That’s why I joined. With regards to the language, I don’t understand everything yet, but I’m working hard to fix this problem. We have good guys in the team and life outside the arena is pleasant – it’s definitely what I expected.

You played with HSV Hamburg, Flensburg and now Paris. How do you compare the three clubs?

HTH:  Of course, Paris is the top club, especially, when you look at the players and the possibilities outside handball. In Flensburg, you spend a lot of time in the bus, especially when you travel to a Champions League game. But the ambitions are the same everywhere. HSV was a difficult chapter – we had financial problems and everything that comes along with it.  Flensburg is an organization that always wants to be in the top of the league and that’s the same here in Paris. As I said,  ambitions are the same but I think Paris is just a step above the rest. Traveling to games is also different  – for me it was perfect to come here.

Traveling time is an issue that comes up often when I talk to players in Germany. Rasmus Lauge Schmidt mentioned it as one of the reasons why he chose to leave Flensburg for Veszprem.  Is it a real problem for players?

HTH:   I don’t think it’s a problem until you start thinking about it.  For me, it was no issue when I was 20 years old and single. But now, I have a family and two kids and I think a little bit different than ten years ago. I want to spend more time with them, that’s also why I came to Paris. To play in a good team and to have more time together with my family. Traveling is one aspect, but at least in Flensburg, we won almost every game so it made the journey back easier. When you lose a lot, it’s not that much fun. But, that’s how things are in Germany.  I like it better in France.  Paris provides me with the opportunity to play top handball and have some more time at home.

Looking ahead – the World Championship 2019, in Denmark and Germany is looming large. How much are you looking forward to it?

HTH:  It’s special – it’s at home and we have a good team. Many people expect a lot from us, but we as a team have even higher expectations. We want to be on top and when you play at home, you want to show your best handball to your fans. You don’t want to be just “good”, you want to be outstanding. The tournament will be one of the highlights this season, but before we get to it, there are still plenty of games on the club level. I’m sure most of the  players still don’t have the World Championship on their mind.