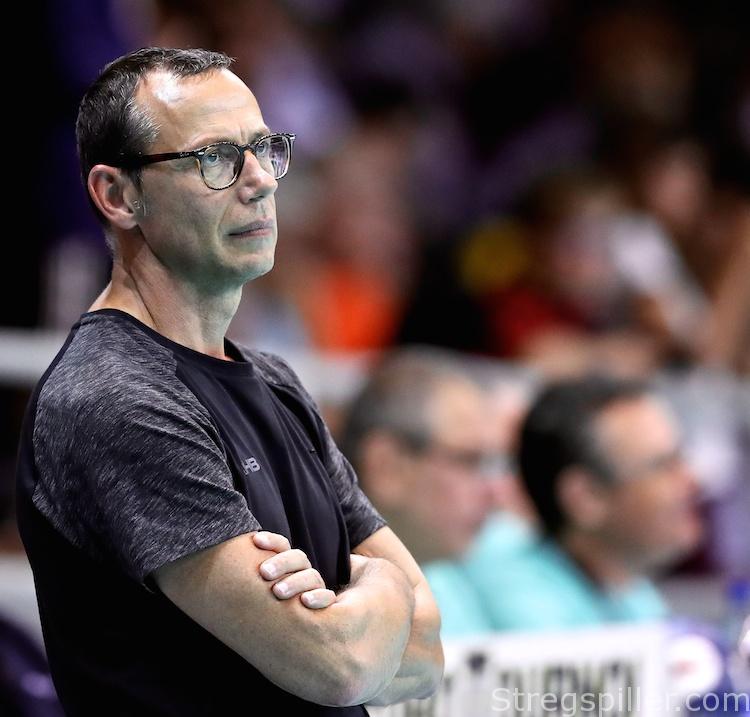 Patrice, Montpellier played the last preparation games at the 2018 Eurotournoi in Strasbourg.  Is your team where you want it before the start of the season?

PC:  As a coach you are never truly satisfied but at this tournament we played against three teams at the Champions League level and it provided us some good feedback what we still have to work on to get better. We arranged for some court-time of our younger players because they need to progress against clubs like these. And, of course, I’m very happy that nobody is injured.

So, we can assume that after beating Nantes and Veszprem, Montpellier is ready for the French league?

PC:  For me preparation is not over yet. The real test will be against Aix, the first league game of the season. For us, it was important to win some games.  Before we arrived here (in Strasbourg ed.) we had lost against Barcelona and Berlin.  So, we had to get the ball rolling our way again.

In May you won the Champions League – is this season more difficult to prepare for compared to previous years?

PC:  No – it’s not. The players really gave everything they got.  Preparation went well. I was afraid because when you win, sometimes you relax a bit too much. But it hasn’t been the case – players showed a lot of effort, especially when considering the hot weather we’ve had in the south of France.

Still, do you think that something changed, now that you succeeded in the Champions League?

PC:  What’s going to be different this season is not us, but the way others will look at us. All the teams will play against the reigning European champion and our opponents will put more pressure on us.  It’s going to be interesting how my players will react. Last season, they were able to cope with it but we had the role of the “underdog”. Who knows if they’ll react the same way, now that we’re meant to be the favorite? I said “meant to be” because we do not consider ourselves being a favorite. We’re among the best, but certainly not better than the rest.

PC:  What does it mean, anyway? Look at some of the performances of last season. Veszprem was beaten by Skjern, we defeated Barcelona. Who was supposed to win these games? The gap between the squads is so narrow that all of us can be considered favorites if you fancy it. But let’s face it, teams like Paris, Veszprem or Barcelona are meant to win the Champions League. Us not so much, but that doesn’t mean we can’t do it.

I wouldn’t say that. Today, the ranking in Europe is very tight. At least a dozen of clubs can perform well and qualify for the quarter-finals of the Champions League. Look at Meshkov Brest.  In my opinion, they have the quality to go far in the 2018/19 Champions League. What we know for sure is that we were the best team last season, we beat the best clubs to win the title. We qualified against Barcelona, Flensburg, Vardar, and all of them are big European powerhouses – we didn’t steal our success. Last season, we succeeded and we are very proud of the accomplishment but the next one (season ed) will be completely different. We’re not afraid of anyone but we do know that victories won’t be handed to us.

Do you expect a tougher year than the previous one?

PC:  I think this season will be more challenging for us to cope with, especially mentally. When you play against the very best European clubs every Sunday, we have to be 100% invested. And weekend after weekend, knowing that the French league isn’t an easy one either, there’s a risk of a mental lapse.  For us it’s clear that this season may be more difficult. But we have 19 professional players and that’s why I insisted on providing enough court time for the substitutes during preparation. If we play the whole season with only eight or nine players, we’ll hit the wall pretty quick. Whereas if we use all 19 of them, we’ll have a chance to succeed.

How much flexibility will you have as only one new player joined Montpellier over the summer?

PC:  Actually, we don’t have only one. Yes, Fredric Pettersson has arrived, occupying the lineplayer position, but Mathieu Grébille is back as well after spending one year away from the team. Yet, we have to be careful how his body reacts – I put a lot of faith in him and I’m pretty sure he will add quality to the team. To me, he’s like a “new” signing.

Is there anything you would wish for this season?

PC:  Perform as we did last season, but win the French league as well? (smiles). Seriously, we want to win a trophy and qualify for the Champions League. And if things turn out better, then I’ll be happy to take it as well.