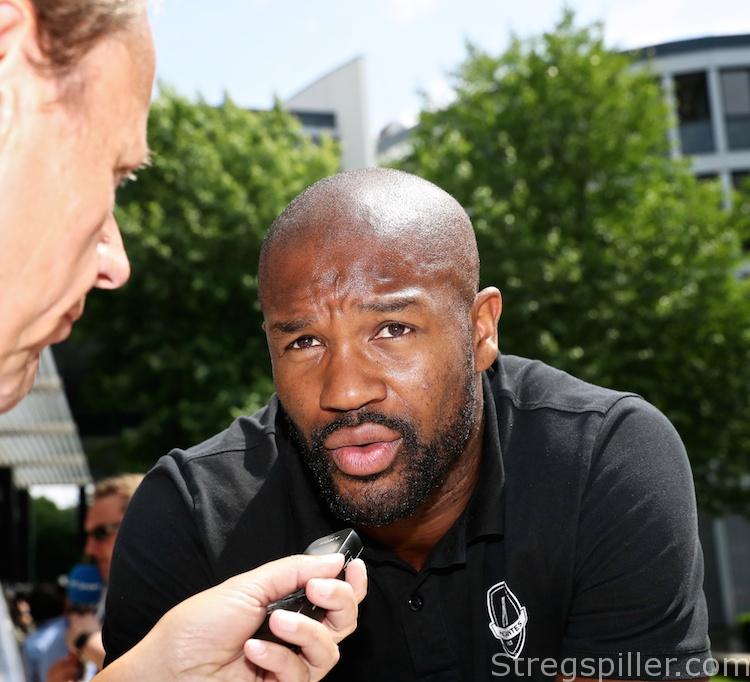 “We will do everything to make the favourites lose.”

After over two decades of professional handball, Rock Feliho will call it a day after this weekend’s EHF FINAL4 in Cologne, the perfect setting for the man who has been synonymous with HBC Nantes’ rise to the top of European handball.

On Monday, the 38-year-old defensive specialist announced his decision, sparking a wave of tributes and adding an extra storyline to Nantes’ second trip to Cologne.

“It has been a busy week but I feel pretty good about announcing my decision and I have to say I feel relieved.

“People have been asking me a lot this season, wanting to know about my future and for a long time I didn’t know what I wanted myself.

“It was an important moment, filled with emotions because I’m bringing an end to an important part of my life, which has lasted 20 years. That’s why I wanted to do it at the beginning of the week, to let people know and then focus on Cologne.”

“You play for the people”

The fact that Feliho made this announcement to get it done with and keep focus on the task at hand says a lot about this man’s devotion to HBC Nantes and his reasons for joining in the first place, back in 2010, says even more.

“When I left France for Germany in 2006, Nantes were not even in the first league but I knew it was a place where people love handball. I heard that there was a big project happening there, something you always hear but is not really the case.

“But I had this feeling about Nantes that it could be nice. Thierry Anti was already a famous coach and he wanted to work with me in the past, I also spoke to some people around the club.

“Having played in Germany, playing in front of big crowds was also important, so hearing that people were coming to the games and loving handball in Nantes was one of the reasons why I went – to really have this feeling that you don’t train for nothing and you don’t play for nothing, you play for the people.”

The 28-year-old who joined Nantes is far from the Rock Feliho we know today. He arrived from German club Balingen-Weilstetten a goalscorer but coach Thierry Anti had other ideas for him.

“That was a big change in my career, I used to play in attack but Thierry felt he needed to change something in the team and he saw that I had the potential to do it well. At first, I was pretty bad because it is a big change but I trained a lot and tried to become the defender he wanted and to prove to myself that I could do this at this level, for my pride.”

“One eye on our beers”

With Rock committed to a new role, he quickly became a leader for the ambitious French club as they began their march on Europe, first as contenders in the second tier EHF Cup and then the big time.

“The thing about this club is how crazy the president Gaël Pelletier and Thierry Anti were. Every year, at the beginning of the season, they would set the goals for the season and say we are going to try to do this. We players would think they are crazy but at the end of the season we’d do it.

“That pushed us a lot and you might think ok, is that luck? But it wasn’t luck, the next year we’d do even better.

“First, the EHF Cup was the goal and we reached the final twice, great. Then our first year of the Champions League was great for us as well, we were eliminated by PSG after drawing the first game in 2017.

“That season we won the French Cup and were second in the league, so we were all celebrating in Crete with the team’s fine money for that season, while the FINAL4 was on. We were not thinking about handball, we were just enjoying ourselves and celebrating. We had the FINAL4 on some of our phones with one eye on the games and one eye on our beers.

“We had no idea that one year later, we would be there.”

And boy were they there. Nantes reached the FINAL4 with a French flair in 2018, where they beat favourites PSG in the semi-final before falling to Montpellier in the gold medal match.

A return journey felt unlikely this season. Despite the shock win over Kiel early in the group phase, Nantes struggled to get their full squad fit and struggled to find consistency.

After limping to sixth place in group B, they suddenly came to life in the knockout rounds, producing some magnificent performances to dump Kielce and Veszprém out en route to Cologne.

“We always believe in ourselves within the team, we have some great players. When you enter the Champions League, the greatest competition in the world, you simply have to raise your level, so even when we are not playing well, we always stepped up, which gave us a lot of self-confidence.

“We have beaten good teams all season, Kiel, Aalborg, Kielce and Veszprém, so it was not just luck, we deserve to be there.”

“I had to do something”

This journey faced a huge blockade in April, when Feliho injured himself against St-Raphaël, suffering what at first looked to be a dreaded ACL rupture.

“When I injured myself, I was really scared and sad. The first thing I thought about when I was on the floor was missing the quarter-final against Veszprém because this could be the last chance for many players in the team.

“That was already the motivation for us in Kielce, we didn’t want it to be the last game in the Champions League for the likes of me, Lazarov, Dumoulin, Nyokas, guys who have been here for so many years.

“One doctor told me my season was over but I said it was impossible, I had to do something. Another doctor told me it would be hard but there is a chance if we did it a certain way, so I worked really hard on rehab with my physio to get fit again and my teammates gave me this great gift of playing in the FINAL4.”

Nantes at this EHF FINAL4 would not be the same without Rock Feliho, marshalling the defence which has driven opponents up the wall this season and teeter on the edge of the rules to get the job done.

Depending on the referees’ mood on Saturday, their defence could be a risky approach but it is a risk they are willing to take to stop the prolific Barça attack.

“If you want to win against Barcelona, you have to take risks. We will try to do things that disturb them and take them out of their comfort zone.

“Our defence will be key, it always is, with the goalkeepers and we are lucky to have this blondie devil Emil Nielsen, who is incredible at the moment and gives a lot of confidence to the defence to do things to make it as difficult as possible for our opponents.

“Barça are the big favourites for the semi-final and for the competition alongside Paris, but we will do everything to make the favourites lose.”

Underdog success stories is what Cologne is all about but Feliho knows this cannot be taken for granted at this level. And regardless of the result, the 38-year-old will go out as a hero when he leaves the court for the final time on Sunday evening.

“First of all, I will enjoy a big beer. On Monday, we have a fan party to say goodbye to a few people because this year was pretty tough for everyone, playing in front of empty arenas, that is not why we train so hard, so it will be nice to enjoy some time with the fans. After that, I will take some holidays, that’s for sure.”