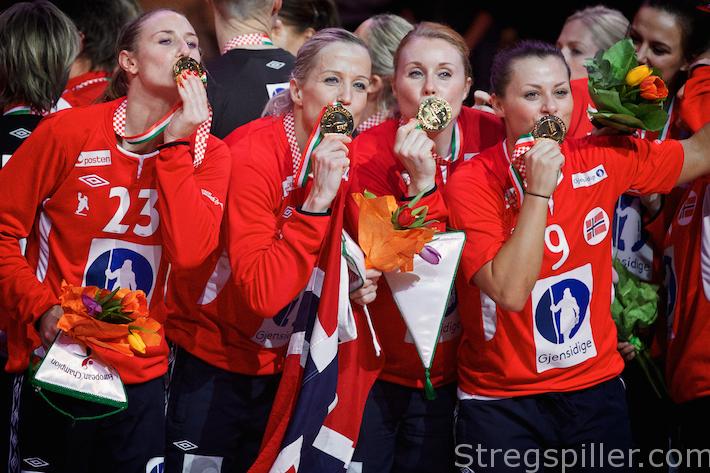 The Week Of Surprises

Women´s EHF EURO 2014 was probably the most balanced European championship in its history and a multitude of wrong forecasts ahead of the tournament proved that it was also one of the most unpredictable competitions.

“Dad, what is a sports journalist?” a little boy once asked his father.

The father answered, “A sports journalist, my son, is someone who spends most of the week telling people how the matches on the weekend are going to turn out, and who then spends all of Monday explaining why the games turned out completely different!”

Well, that definition of a sports journalist definitely fits yours truly!

As all readers of this blog will know by now, virtually all my predictions ahead of the women´s handball European championship went down the drain.

There were just about two things I was right about.  One, Ukraine did exit the competition after the preliminary round.  And secondly, the event became the women´s European championship with lots of surprises and numerous unexpected outcomes.  In fact, one of the bigger surprises, in my opinion, came a week after Europe’s bi-annual handball event ended – the dismissal of Denmark´s national coach, Jan Pytlick.  I will get back to this matter later.

It was not in the cards that Norway would finish on top this time around.

The absence of a pregnant Katrine Lunde in goal was not the best omen for Norway even though national coach, Thorir Hergeirsson, got a very early Christmas present because of the come back of line player Heidi Løke after one of the shortest breaks from a national team handball ever seen.   Norway’s test results ahead of EHF’s EURO 2014 did not exactly provide reasons for optimism either.

The injury that sidelined, next goalkeeper in line, Kari Aalvik Grimsbø after the first match did nothing to increase hopes in the “handball mad” country.   After all, Norway was also missing line player and defense specialist Marit-Malm Frafjord as well as supplementary right-back Linn Jørum Sulland.  Still, the Norwegians managed to overcome these obstacles and finished as the indisputable best team of the tournament.

It was particularly impressive to see how Silje Solberg – only third choice before Lunde’s pregnancy – rose to the occasion and collected the prize for Best Goalkeeper at EURO 2014.

It also came as a surprise to many of us, so-called experts that Spain made it as far as to the final match.

However, tactical cleverness combined with a physically strong defense and, at times, very inventive attacking play took the Spaniards that far.  Spain’s offensive efforts developed rather elegantly, all with entirely right-handed players in their back-court lineup.  Respect.

We cannot end the list of positive surprises without mentioning Sweden.

It demands admiration what Scandinavian coaching duo Helle Thomsen (Denmark) and Thomas Sivertsson (Sweden) were able to make out of this team within the six months they have been in charge. Consequently, the Swedish effort was rewarded with a bronze medal.

Both hosts were negative surprises on the court and such results showed in poor attendance levels as well, unfortunately.

Obviously, Croatia was the largest disappointment, not even passing the preliminary round. Hungary, at least, managed to reach the match for fifth place where they could not overcome France.  The team of Alain Portes had started EURO 2014 in commanding fashion but could not quite keep up the steam throughout the two weeks of the sporting event.

A true and big negative surprise was Denmark.

After winning the bronze medal at the World Championship in Serbia, a year ago, and promising results during the “Golden League” tournaments this fall, most everyone was expecting more from Denmark than the eighth position at EURO 2014.  During the two weeks of the competition, rarely did the Danish team reach its top level but – surprisingly – tested the lower limits of the performance spectrum all too often.  The last main round match against Spain turned out to be a “quarter-final” in which a draw would have been sufficient to send the Danes to Budapest and the semi-finals.  However, Jan Pytlick’s team was never even near a draw, in a game where they more or less collapsed in the second half, getting down by ten goals.   Towards the end, the Danes managed to put a little cosmetics on the result while limiting the defeat to 29:22.  Still, far from being an honorable achievement.

After being in charge of Denmark´s female national team since 1998, only interrupted by a short break from 2005 until the beginning of 2007, Pytlick was sacked on the fourth day of Christmas.

The announcement came as a major surprise to me – maybe the biggest of all surprises in connection with the European Championship.

To me the decision appeared to be a reaction made in panic by the Danish Handball Federation who seemed to have forgotten its own objectives for the team. We heard again and again of the intention that this squad was supposed to peak at the World Championship on home ground in December 2015 and at the Olympics in Rio de Janeiro 2016.

However, the bronze medal at the World Championship in Serbia 2013 and the positive performances in October and November seemed to have caused a state of – more or less – unrealistic euphoria at the top echelons of the federation as well as in the media and among the fans.  Such high expectations were justified. The players had created them themselves through their fine performances.  By contrast the Danish achievement in Debrecen at EURO’14 was a disappointment.

However, it was still an isolated disappointment.  Had the Danes defeated Spain in the decisive main round match and reached the semi-finals, everyone would have been happy.  Now, a new coach will have to prepare the Danish national team for a World Championship at home, where expectations will not be any lower than they were ahead of this past European Championship – to the contrary.

Did we see anything new?

New trends were hard to spot in Hungary and Croatia.

Once again, we saw the intense physical aspects of the game of handball and how important a physically strong defense has become in particular.

You might say that it was a new experience to see offensive plays such as “seven- against six field players” practiced as consequently as it was done by the Danish squad, especially in their main round match against Hungary.  In that contest, for about 45 minutes Denmark replaced its goalkeeper with one extra field player virtually every time they attacked – with tremendous success.

One key reason for such favorable outcome was, of course, that Hungary’s coach Andras Nemeth did not seem to know what on earth he should do to counter this tactical move.  It was entertaining to watch Nemeth exhaust more or less all “solutions” he should not have chosen at all.  About five minutes into the second half, a tweet from Larvik’s coach, Tor Odvar Moen, read: “When do you think Andras Nemeth will discover that Denmark is playing seven against six?” At that point, the Danish team was playing in this formation for the past twenty minutes already.

Following the match and the 23:20 win for Denmark, Jan Pytlick was saluted as a tactical genius in the Danish media.

Two days later after the defeat against Spain, he was deemed not good enough for the job anymore and another eleven days later he was let go.

A good example of how fast things can change in sports at the top level!