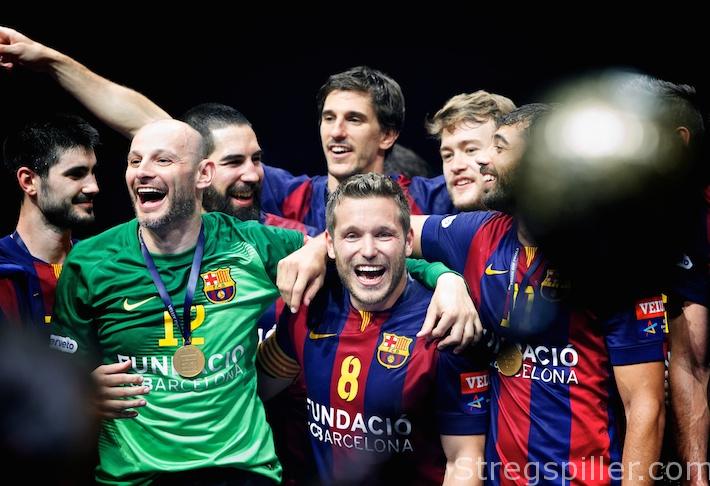 Welcome back to Cologne, Barca!

stregspiller.com – MATCH OF THE WEEK REVIEW – After missing out on the FINAL4 last year, Barca Lassa will be back in Cologne later in June. It’s beyond any doubt.

At home, at Palau Blaugrana, they will not surrender the seven-goal lead they built in Nantes, on Wednesday night.  Nantes were in the game for the first 16 minutes of the match, thereafter Barca Lassa dominated the affair all the way to the end.

Let’s face it this quarterfinal is decided after the first leg already.  Not even the old cliché, “In Handball anything is possible” will hold water – not in this case.

Maybe they don’t want to hear it in Barcelona yet, but early congratulations are in order after having missed the FINAL4 last year.

Victor Tomas & Co. were the far better team and Nantes only managed to save a bit of pride, when they cut a 10-goal deficit to seven, towards the end of the match.

In fact, Barca´s only “major” mistake was defending without a goalkeeper for about 10 seconds in the first half – still not conceding a goal!

Although N´guessan was on Barca´s team sheet, Danish, Lasse Andersson, started as left back and as it turned out, N´guessan remained on the bench throughout the game.  A fact that did not hurt Barca’s efforts.

On the other side, Eduardo Gurbindo assumed the playmaker position in the absence of Nicola Claire, and Nantes got off to a fine start.

Had it not been for two quick shots hitting the woodwork, the home team would not have been down 5:3 after nine minutes.  But, as it turned out  Thierry Anti was forced to play 7-against-6 already in the opening phase of the match.

Unfortunately, the measure did not pay off and Nantes conceded one goal into an empty net, increasing the deficit 6:3.

After Nantes cut the deficit down to one (6:5), the game’s most curious event took place, as the home team played nearly 10 seconds not noticing that Barca was without goalkeeper, before Gonzalo Perez de Vargas took his spot between the posts.

Still, Nantes scored the equalizer (6:6) later on in the same attack –  it was the last time the teams were tied.

Soon thereafter Barca went up by three goals (9:6), and it did not get any better, when Olivier Nyokas replaced Gurbindo as playmaker.

Nantes coach, Thierry Anti, used his last timeout of the match in the 40th minute already, at a point, when his team was trailing 22:15.

The step did not yield any results as things went from bad to worse in the following minutes, as Lasse Andersson handed his team their first 10-goal lead at 25:15.

Unlike Anti, Barca coach, Xavi Pascual, rotated his bench as he saw fit without losing his grip on the game – certainly not as long as he kept Aron Palmarsson on the court.

Towards the end of the affair, Nantes somewhat recovered after being down 26:16. By the time the final buzzer sounded, the deficit was reduced to seven goals, a result that won’t allow any realistic hopes to develop for game 2 in Barcelona, much less a 2019 FINAL4 appearance.

“Congratulations to Bacra Lassa.  We made too many mistakes during both periods.  Tonight, they were just better than us and deserve their victory.  We will have to show something else at the Palau.”

The return match at Palau Blaugrana on May 4th will turn into a mere formality and handball fans accross Spain can look forward to the return of Barca Lassa to the FINAL4, in Cologne.