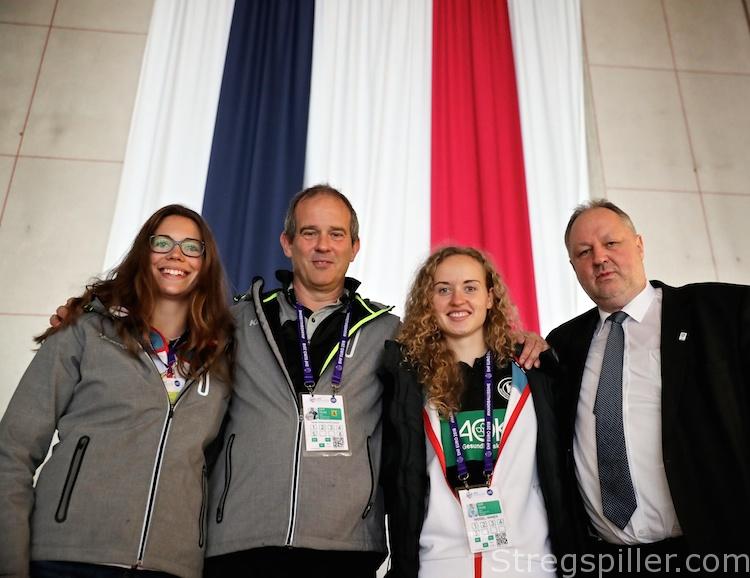 “We’ll draw up a plan and will be ready”

INTERVIEW – On Sunday, the German national handball team followed the invitation of the major of Brest, attending a ceremonial event at city hall. DHB President, Andreas Michelmann, head coach, Henk Groener as well as Emily Boelk and Maren Weigel were all present.  stregspiller.com caught up with the two players before Game 2 against Romania, at the EHF European championship, in France.

Following the success in your opening match against Norway, how would you describe the mood in the team?

EB: Of course, it’s great – but this morning we had a brief team meeting, acknowledging the fact that the game (against Norway ed.) is behind us and is “yesterday” news, already. We also know that the victory by itself won’t take us to the main round. We want to take more points in the next two games and that means that we are fully focused on the task ahead.

For many the win came unexpected and the statement of “the team not feeling any pressure” was used repeatedly  – this by itself can’t be the entire explanation?

MW: Indeed, it was a critical factor as we knew that Norway would be an extremely strong opponent. Equally important was the focus on our own game and as everybody could witness, it worked quite well. Maybe we surprised Norway, but we stayed calm during crunch time, even though it was a very close affair, almost the entire time.  I am very proud of the whole team. Hopefully, the confidence gained in this match will push us even further in the game against Romania.

Towards the end of the match it was impressive to see how stable the team operated – not a sign of nervousness – and a meaningful step forward, considering the team’s history of the past few years. How do you see it?

EB: What we all have to internalize is to believe in our abilities and us. These qualities make us strong as a team and if we approach the next games with courage, while staying relaxed at the same time, it will help us a great deal – especially, as we are a very young team. The injury of Kim Naidzinavicius forced us to stick together even more and this we did well – so far.

How much of a factor is your new coach compared to the World Cup, last year?

EB: I think it’s normal that every coach has his or her own philosophy and temperament. Every coach wants to shape a team according to his own ideas. Henk (Groener ed.) expects a great deal of self-initiative, responsibility and focus from each player, while maintaining the pleasure and joy of playing handball.

The next team you will face in the tournament – Romania – in some respects appears to be an “easier” opponent than Norway, considering that you can just focus on 2-3 key players that carry the team?

MW: We should not fall into the trap and underestimate any team – that’s probably what happened to Norway on Saturday. We do know the players you are talking about very well and they can make the difference. But, we will prepare diligently and deal with what will be thrown at us.

In short – if you can neutralize Cristina Neagu, you’ll be halfway there?

MW: Neagu is the most outstanding player and can decide a game on her own, but she can also turn into a liability if she doesn’t show her best form – we will see it on Monday.  Anyway, we’ll find a solution, but Romania does not rely entirely on her (Neagu ed.), they also have an excellent line player and a fantastic playmaker with Eliza Buceschi. She was honored as “Player of the Match” in the game against the Czech Republic – but no matter what, we’ll draw up a plan and will be ready.