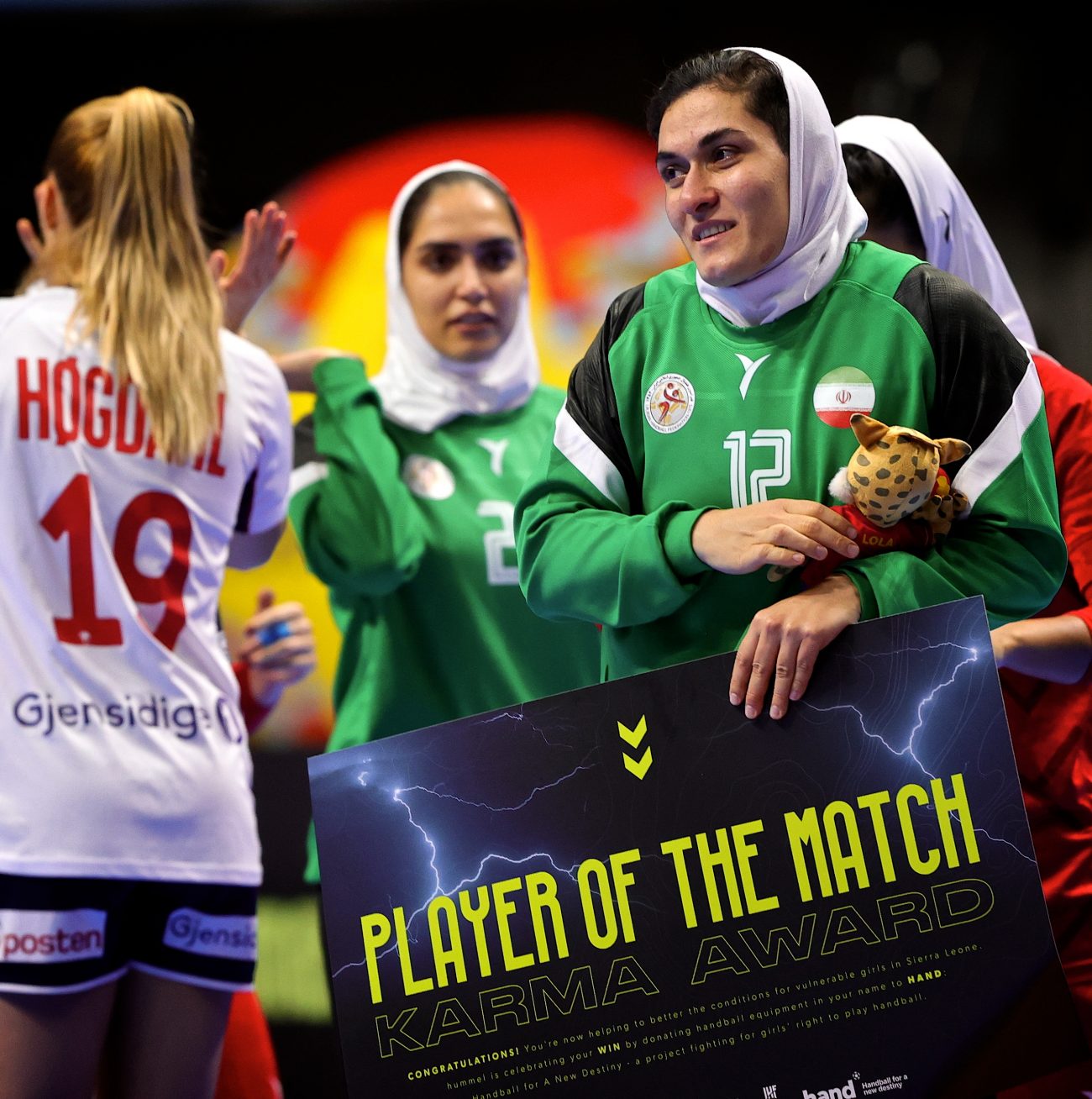 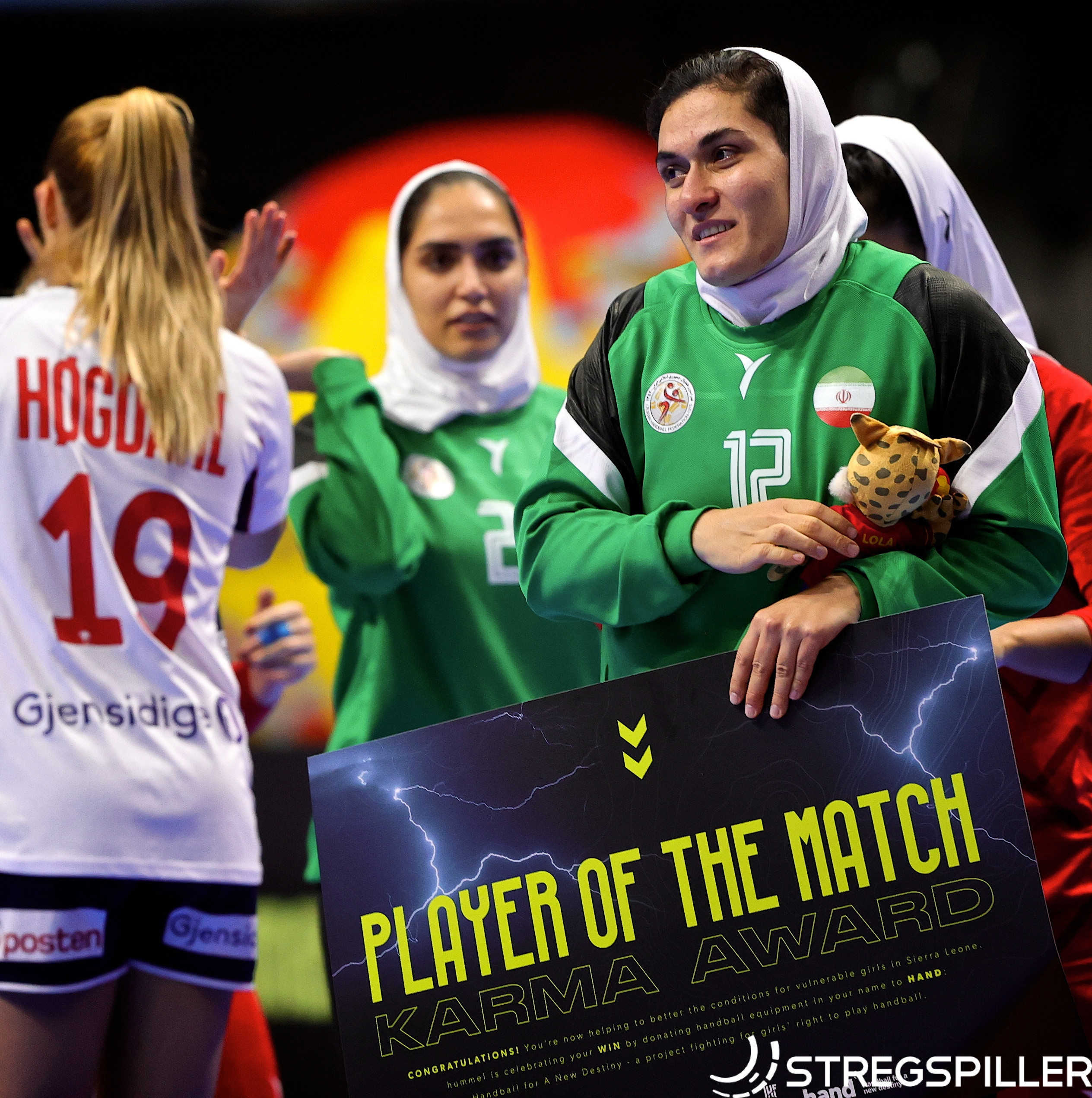 As I entered the media centre at Pla de L’Arc in Llíria on Friday and cast an eye over the screens showing matches taking place elsewhere, one game stood out among the hammerings being dished out by big-name teams – Romania were beating Iran 19:2 after 27 minutes. Not exactly a scoreline that makes you want to watch any further…

But with the Valencia Marathon taking place on Sunday, it was a good excuse to leave town early and head north to Castelló and catch a bit of group C action, primarily, Iran’s next encounter in their baptism of fire, European champions Norway.

Iran’s women’s team are competing in their first World Championship. Having missed out on Japan 2019 due to a loss against Australia in a 5/6 placement match at the 2018 Asian Championship, their breakthrough came earlier this year in Jordan, finishing fourth in Asia without the likes of China or Australia competing.

As the only true debutants at this level, taking on the hot favourites for the title makes for an interesting experience. How much either of these teams would gain from it is difficult to measure but it offers a true clash of handball cultures.

Given the longstanding discrimination and oppressive laws female athletes face in Iran, their participation should be celebrated as should performances such as the 18 saves made by their goalkeeper Fatemeh Khalili against Romania.

Contrast that with their opponents, the darlings of Norwegian sport, commanding the nation’s attention every December in anticipation of a major championship medal, a handball nation which singlehandedly tore apart the IHF’s beach handball clothing regulations with a noble stand that captured the world’s imagination.

Norway coach Thorir Hergeirsson is known for refusing to be drawn to predict games, regardless of his team’s superiority, but even he would find it hard to sit on the fence, this was by no means a “fifty-fifty” encounter.

But that is not what this match is about. In a pre-game feature by Norway’s TV2, Iran playmaker Mina Vatanparast listed Nora Mørk and Stina Oftedal as her role models, while Mørk shared her admiration for the achievement and barriers broken by the Iranian women to compete at this level.

What stood out to me at first was the bond the Iranian team clearly had as they had each and every player go round and high five every teammate before throw-off. Norway showed the utmost respect, throwing their full-strength team on court.

After a couple of Fatemeh Khalili saves, Iran took an early 2:1 lead. That was as good as it got.

Midway through the half, Norway threw on fresh legs and continued to approach the game with ruthless counter attacking as Iran conceded 20 turnovers in the first period alone. I wondered whether at some point we would see Thorir Hergeirsson tell his players to chill out with the fast breaks and focus solely on running through the playbook. He did not.

I was really intrigued to see how much perseverance Iran had in the face of this hopeless task and to their credit, they took on every attack with the same gusto as they did in the opening minutes, moving the ball and themselves as much as possible, but to no avail as they ran headfirst into a solid Norwegian defence.

Concentration appeared to be a bit of an issue for Norway in the third quarter but they soon kicked it up a gear and began to pile on the goals.

Iran struggled to make anything happen but they never struggled for effort. A late 3:0 run left them tantalisingly close to the 10-goal mark but it wasn’t to be, Norway claimed a 41:9 victory.

What did Norway think of their new opponents? Line player Maren Aardahl had this to say.

“For us, it was about having respect for the opponent and setting some internal goals, like how many goals we were going to let in, and mostly focusing on ourselves.

“We were very happy with the first half and in the second we wanted to keep it under 10 goals and we managed that. Maybe we let in some unnecessary goals in the end but it is hard when you are leading by so much in a game like this.

“It’s always special to play against teams like this, we don’t know so much about them. It’s their first World Championship, it’s great that they have the opportunity to come from Iran, but my expectations were met, we won and we ran a lot.”

The external expectation of a potential record win, the previous record win was 48 goals (Hungary 57:9 Australia in 2005) was not met, thanks in some part to the 11 saves made by the trio of Iranian goalkeepers.

Fatemeh Khalili clocked seven of those, including some now trademark point-blank stops which capture the imagination of the handball public. There was some sporting justice at the end of the match as the player of the match award she was cruelly denied two days earlier was given to her this time around, tears and cheers followed in a moment which these two vastly different handball worlds happily shared.

Congratulations, Fatemeh! Today we’re winners, together. 🤩
We wish you and Iran all the best in the upcoming games! 🇳🇴🤝🇮🇷#SheLovesHandball @ihf_info pic.twitter.com/putHtfBbCK