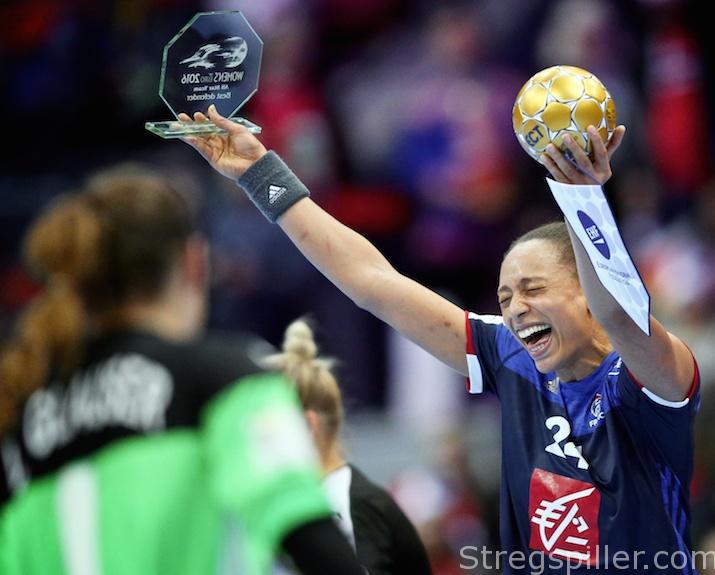 INTERVIEW – One major reason why France won the World Cup in 2017 was their solid defense work. Slovenia aside, it crushed every other attack, including Norway’s in the final match. Such formidable power in front of the goalkeeper explains why the hosts are among the favorites at EURO 2018.

If anyone it’s Béatrice Edwige who personifies, France’s defense skills. The Metz player is one of the best in the game of handball and it’s no coincidence that the French side sports the best defense formation in the 2018/19 Women’s EHF Champions League.

“Both systems are very different. The defense of Metz compared to the one of France  couldn’t be more different.

“In the national team, we play a zone defense whereas in Metz we’ adopt more of a one-on-one system,” explains Edwige, before disclosing the recipe of France’s signature piece.

“We’re able to adjust to a 5-1 formation quickly, but especially with Estelle Nze Minko upfront, it’s something else. She feels the game like not many can, but she also falls back and help us when we get in trouble,” she explains.

Many teams get scared when thinking about how to stop Norway’s offense, for instance. But, these days even more of the contenders at EURO 2018 wonder about how to create gaps in France’s defense system, that includes players such as Camille Ayglon-Saurina, Beatrice Edwige, Astride N’Gouan, Alexandra Lacrabère and Allison Pineau, just to name a few.

“When I defend, my objective is to attack the other team’s offense. Mentally, I want to be on top of my opponent.

“And, sometimes, I won’t even touch her, but just  interfere to change her intentions and disturb their offense,” she says before emphasizing how you succeed in the big games of a major competition.

“Often we get in the head of the other player. Now, that everybody knows that we can do it, they’re even more easily impressed.

“Not only are we physically superior to many of the other teams, but psychologically we are able to disrupt their rhythm as well.”

Experience is the third key that explains France’s superior defense. The core formation hast stayed unchanged and is the same for the past three years, as often it looks like France could play defense with their eyes closed.

“When players get tired they make the move and take the shot they know best.

“Vyakhireva, for instance, will fake to the inside and then go for the outside shot. When this happens, it is my duty to be there, especially in the last seconds of the game. I don’t allow myself the right to fail – I work to stop her at this very moment,” says the 27 years old line player.

Any defense formation wouldn’t be complete without a pair of outstanding goalkeepers. Last year in Germany, Amandine Leynaud and Cléopatre Darleux complemented each other perfectly well.  At EURO 2018, Darleux will be replaced by Laura Glauser, but the mechanics should remain the same.

“We can’t work separately. For example, when we try to block shots, it’s team work. Our goalkeepers can’t be separated from our defense, they are an integral part,” ends Beatrice Edwige.