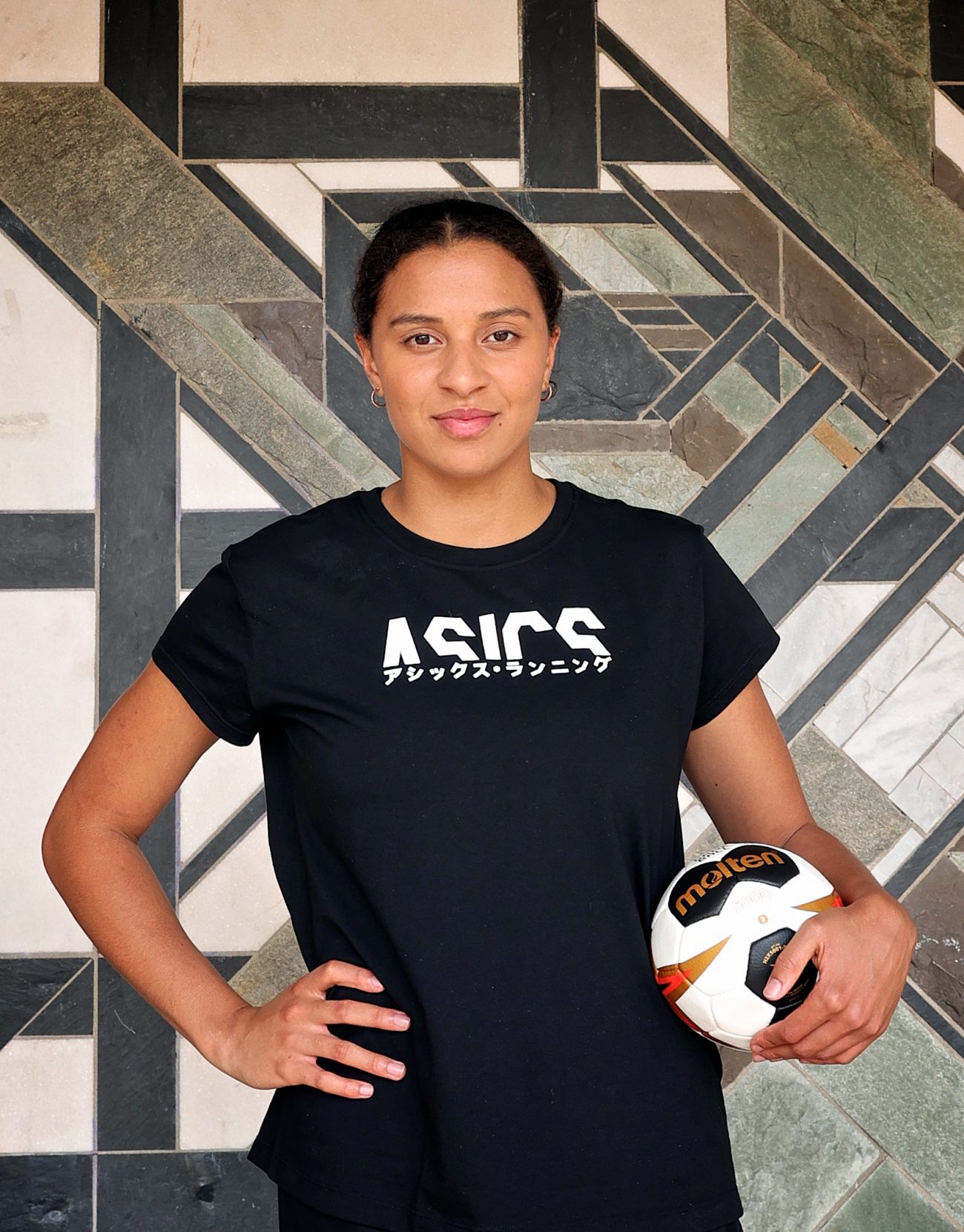 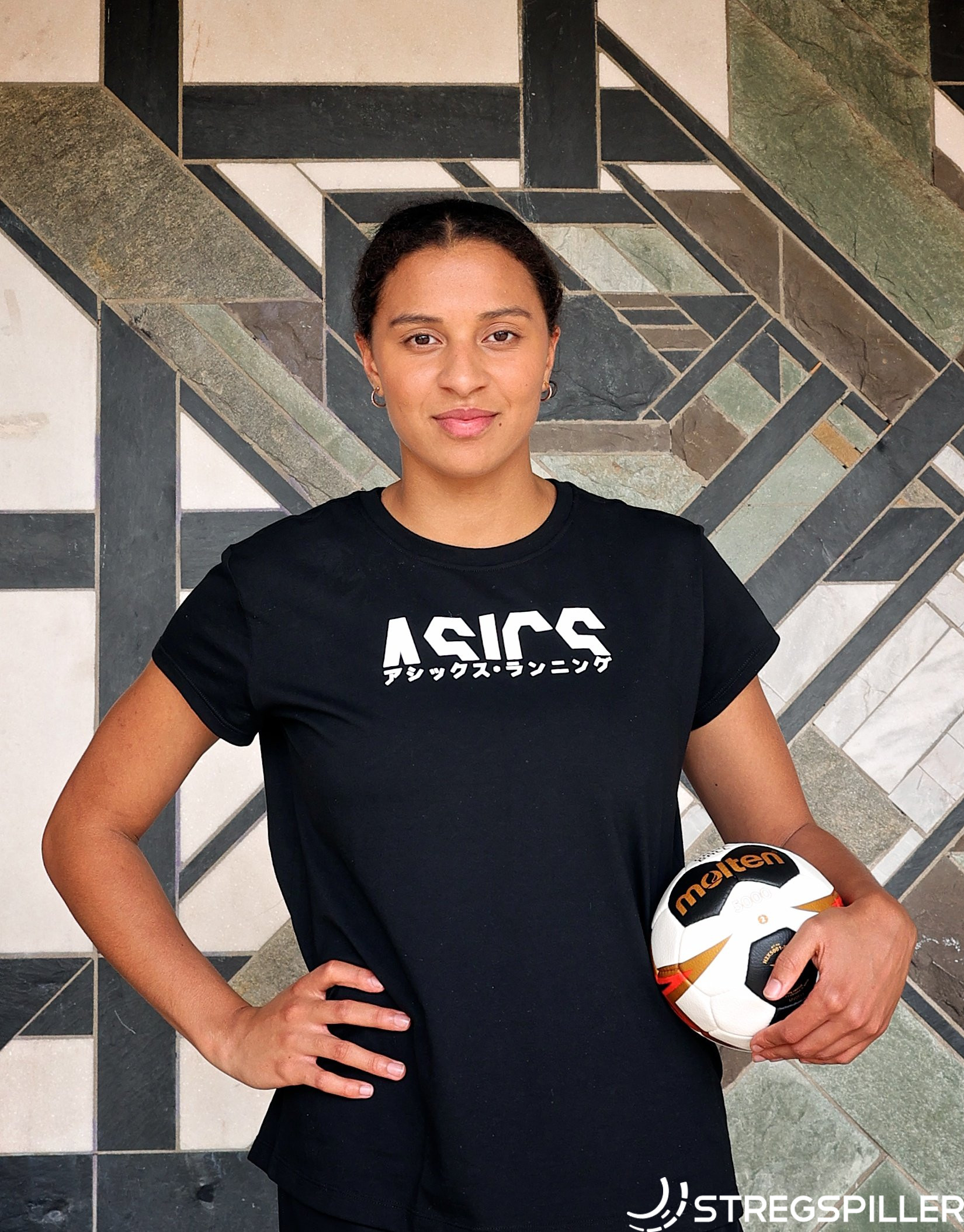 Winning the U-17 European championship in 2017 certainly was a bright spot in the recent history of German women’s handball.

In stark contrast to the senior team – in the same year the DHB squad finished 12th at the IHF World Championship on home soil – Aimée von Pereira together with her teammates succeeded in the European contest and won the final match against Norway 23:18 (9:12).

For Germany it was the first title in this competition and the outstanding performance of Aimée von Pereira earned her the MVP award on top of everything else.

From Buxtehude SV, where she played in the youth league, Bayer Leverkusen became her next club with the intention to begin her studies in nearby Cologne, in the following year.  Unfortunately in Leverkusen it did not work out as well as Aimée von Pereira had anticipated and her stay was cut short.

At the time most of the clubs at Handball Bundesliga Frauen (HBF) had already made their plans for the upcoming season and after careful consideration Aimée von Pereira opted for a club abroad and signed a two-years contract with Copenhagen Handbold, in Denmark.

Eventually, her objective to become a complete handball player brought her to the south of  France.

stregspiller.com caught up with the talented left-back from OGC Nice Côte d’Azur Handball, where she’s currently under contract until the summer of 2023.

At this early stage in von Pereira’s career it begs the question if there are other handball players, who serve as role models?

“Jamina Roberts (i.e. Swedish international ed.) – she is tall and at the same time a very dynamic handball player.

“If I could become a player as dynamic as her when going 1-against-1 and throw the ball as good and hard as Neagu (i.e. Christina Neagu; Romanian international and widely recognized as the best backcourt player in the world ed.) everything will be fine (laughing).

Aimée’s zodiac sign is aquarius – individuals known as being smart, friendly, open and direct as well as being assertive and not known ‘to go with the flow’.  Aquarians make up their own mind and then stick to it.  Certain traits von Pereira doesn’t disagree with.

In hindsight would she have done things differently and chosen another path in handball?

“I would do it all over again. Joining Copenhagen was the absolute best decision back then. It was an exciting time because of the overall quality of the Danish league and to play with stars like Kelly Dulfer or Mia Rej in the team.

“When I arrived, I did not expect to spend as much time on the pitch as I did in my first year there, but because of a number of injuries I played a lot in defense – much more than I expected. It was like a dream coming true and I would make the same decision again.

“The experience in Denmark has been extremely valuable and certainly has helped me to develop, especially on a personal level.”

Her decision to play abroad in one of handball’s most competitive leagues at such early age wasn’t applauded unilaterally and drew some criticism at home as von Pereira explains.

“Not to mention names, but back then it was made clear to me that I would be much better off to play in a German mid-level club, where I would spend more time on the field.

“Abroad I wouldn’t develop as much was the argument I was facing back then.  Aside from my family and support network, people did not like my decision.”

Such criticism was not brushed off easily as von Pereira confirms.  Still, she opted for what she thought was best for her at the time.

“I was raised to listen to critique and to give it thought, but in the end, I make the decision.

“I am not the type of person who caves in easily once I have determined what I think is best for me.  And, at that time I was convinced that Copenhagen was the right place for me.

“The concern if I would further develop abroad wasn’t a real question to me because the quality of handball training as well as all the technical aspects were at a much higher level in Denmark compared to Germany.

“I also wanted to face the tough competition of my new teammates in Copenhagen.  This was a big part of my motivation.”

After two years in the Danish league, Aimée von Pereira decided to head south and join OGC Nice Côte d’Azur Handball, in France.  What led to her change of mind?

“In Copenhagen, I almost always played in defense and it was only towards the end of my stay, when I also spend some more time on the other side of the court.  I felt that I did not want to be “reduced” to a defensive player at such early stage in my career.

“My objective is to become a complete handball player and I want to play on the entire court – not just one half of it.

“The opportunity in France presented itself – it’s a very interesting league with a different approach how to play handball compared to Denmark.  That’s why I opted for a new experience and signed with OGC Nice Côte d’Azur Handball.”

Differences in culture or language barriers did not stop Aimée von Pereira to pursue new opportunities.

“I’ve had such a great experience in Denmark and in general, I consider myself a very open-minded person.  I don’t have any issues to integrate.

“Of course, the French language was another challenge, but usually I am motivated to learn and make progress.  It’s not something that would stop me.”

Aimée von Pereira is only the sixth German player to compete in the French top league. Upon her arrival in Nice she immediately felt welcome and at home.

“Nice is a club with several experienced players and my new teammates received me very well.  Marie-Paule (Gnabouyou ed.), one of the veteran players, took me right under her wings.  I did not encounter any problems.”

Very quickly von Pereira established herself as first choice on the left-back position, while spending anywhere between 30-45 minutes on both ends of the court.

“Ligue Feminine Handball” (LFH) took notice as well and recognized her performances in the “Team of the Week” on two occasions and en route to becoming one of the most promising newcomers in the league.

Then came the set-back.  During a practice session, in the spring of 2022, von Pereira stepped on the foot of a teammate and tore the ligaments in her ankle. It all happened at a time when her form curve was steadily pointing upwards, while scoring four to five goals per game.

At this point in time, she is still recovering following her surgery, which took place in France, and a rehabilitation process, which brought her back to Copenhagen, where her former physiotherapists did their best to help von Pereira to get back on the field as soon as possible.

“In early July, I will return to France, but it will probably take another six weeks from here on before I can play handball including full contact.”

“That’s an open question, at this point.  Last season we were close to 5th place and probably could have done better if I and another player would have stayed healthy.  My feeling is that we can improve on our result from the previous season.”

Germany’s national team had its own struggles ever since 2017.  After the departure of Danish head coach, Jakob Vestergaard in 2016, those responsible at DHB installed Martin Biegler as the new leader. The swingman turned out to be a short-term plug.  After the disappointing 2017 World championship at home, Henk Groener took the helm.

The Dutchman lasted four years, but could not deliver what so many in Germany expect – take the team to the medal round in a major tournament.

In April of this year, Markus Gaugisch, signed up and will perform double duties as head coach of SG BBM Bietigheim and the German national team, before he will fully concentrate on the national squad from the summer 2023 onward.

German players with international experience are in short supply and another tall, powerful left-back with the qualities of von Pereira, on both ends of the pitch, could possibly be a welcome alternative for the new head coach, as he forms the team with the 2024 Olympic games, in Paris, in mind. Aimée von Pereira does not discount the idea.

“It’s a thought that’s always present. Representing your country is the top goal of every handball player – no doubt.  But, I also learned not to stress about it.  It’s important that I allow my body the time to develop and when the moment is right, I will be ready.

“In the past, I also had some minor issues with my knee, but this has improved 100% in the last twelve months.

How does von Pereira rate the recent performances of Germany’s handball women?

“It’s difficult to judge.  From the outside, it was somewhat sad to see that some of the players could not deliver the performances which they showed on the club level. As I said, it’s hard to properly assess the situation when you are not part of the team.”

From the beginning of the 2022/23 season Clément Alcacer will follow in the footsteps of Marjan Kolev at OGC Nice Côte d’Azur Handball.

It will be his first job as head coach. Until now Alcacer was in charge of the “Centre Formation” in Metz, where he developed players like Emma Jacques, Sarah Bouktit or Melanie Halter – just to name a few. All players who are part of “Generation Next” not only in Metz, but the French national team as well.

Expect Aimée von Pereira to benefit from the arrival of Alcacer in Nice and his style of playing handball.

Has Aimée von Pereira given thought and look beyond 2023, when her contract with OGC Nice Côte d’Azur Handball expires?

“It’s not easy for me to give you a final answer here and now. Looking ahead, I hope to step it up a notch or two on the court, first.”