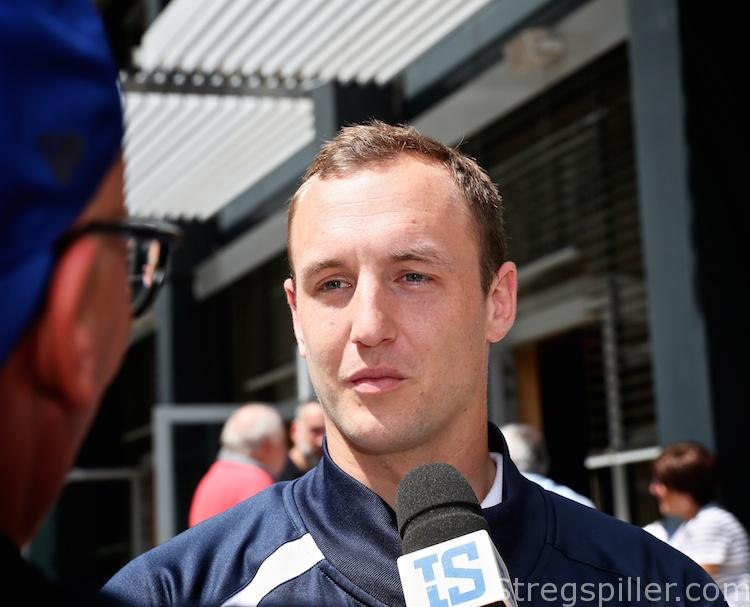 Where is Valentin Porte?

Have you seen Valentin Porte recently?

If you haven’t, it might be because you have been looking in the wrong places. The captain of Montpellier, who in his club usually plays in the right back court, has seen a change when playing for the French national team. He now finds himself on right wing, a position he still has to fall in love with, even though he knows it quite well.

“In Toulouse, my first club, it was my position. When I joined the national team, former head coach Claude Onesta thought I could play in the back court, so I did. And now, the national team coach is making me change positions again,” he recalls.

It seems as if the first change suited Porte just fine, while adjusting to his former position feels a bit harder. You can sense the frustration when talking to him, even though he’d rather describe the situation as “strange”.

“I find it difficult to step into the competition. There have been some good and some not so good moments, so far. I’ve identified which problems I was having on the court and I’ve tried to solve them,” he says.

But despite making all the efforts in the world, there still are some brief periods, when he’s not quite at ease with his “new” position.

“Take the game against Spain – I barely touched the ball and I don’t mean shooting-wise.  I mean actually touching the ball. You can get quite bored as a wing player. But ask Sole, who scored eleven that evening; he won’t tell you the same thing.”

The situation has been going on for a while now, as Didier Dinart moved Porte to the wing.  Last year at the EHF EURO, in Croatia, it happened for the first time. The decision made room for Dika Mem, the youngster, who Didier Dinart trusts more than he does Porte.

“I won’t lie – in the beginning, I was deploring the situation. You feel that your importance in the team is not as big as it used to be. But now, when I see how much quality we have with Dika, Melvyn or Nédim, it’s far easier to accept,” Porte explains.

Yet, there are things that Valentin Porte likes about being a winger.  For one, it’s the face-to-face situations you will encounter with the other team’s goalkeeper. As a matter of fact, the left-hander showcases a variety of trick shots himself, as he did in the match against Iceland, when he scored with a shot behind his back.

“I can see why fans love wing players so much – you can put on a real show. And we have quite a few players in the French team that can do just that – Michaël Guigou and Luc Abalo, especially. But, you have to focus on efficiency first. Spin shots and all the rest of it can be spectacular, but first you have to put the ball in the net,” says Porte.

But, there are downsides to the position as well, as he stated before.  Sometimes it’s hard to not touch the ball for the duration of a whole game. It’s even harder if you get to take only one shot after fifteen minutes or more.

“That’s my worst nightmare. You’re almost ignored – even though “ignored” is not the right word – for twenty minutes or so before the end of the half, and then you have to take the shot for the win. This is so difficult, but it’s also the reality of a French wing player,” says Porte.

It’s true that Casper Mortensen or Kristian Björnsen may take more shots than their respective back court players, and that’s something to complain about the French style of play. But, it is as it is.

“I have to do the unrewarding job, but someone has to do it,” concludes Porte.