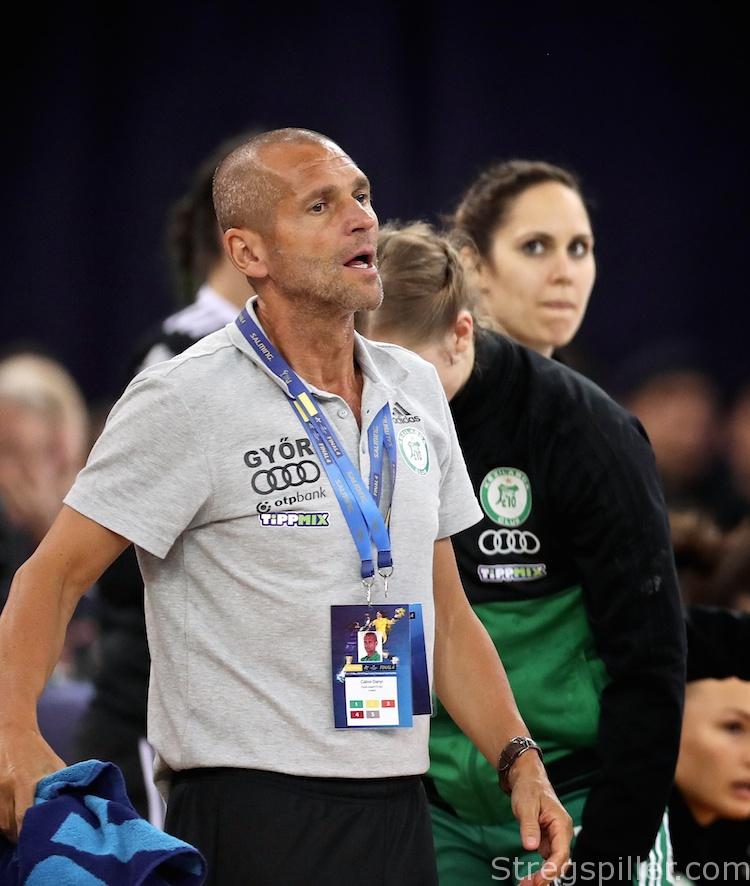 Who could say ‘no’ to the best team in the world?

Danyi was in no doubt accepting the offer, as he reveals in this exclusive interview with stregspiller.com. Turning down the strongest team in the world was not in the cards.

From assistant- to head coach – that’s exactly what happened in Györ, the four times Champions League winner, when legendary Ambros Martín preferred an offer from Russian champion, Rostov Don, ahead of this season and his former sidekick, Gabor Danyi, took over the helm on a one-year contract with an option to renew for another year. The 54-year-old Hungarian did not need to think for long when he was offered the job.

“I had just received an offer from the best team in the world and that’s an opportunity you simply cannot say ‘no’ to,” Gabor Danyi tells stregspiller.com.

The president of the club, Csaba Bartha, stated that club management went through 20-25 candidates before rewarding the job to Danyi. Among others, Helle Thomsen, who was sacked in CSM Bucuresti in the spring, before taking the job in Molde (Norway).

Gabor Danyi is thrilled having made the cut.

“It is a big honor for me having been chosen among all these candidates, but with it comes a big challenge,” he says.

Filling the footsteps of Martín

Talking about a challenge is certainly no understatement. Apart from Györ’s elevated expectations, Danyi will have to fill the footsteps of one of the most successful women´s coaches in handball history, Ambros Martín.

No less than four times did the now 50-year-old Spaniard win the Champions League during his six years in Györ, a fact Gabor Danyi´s is not worried about.

“I have had a long working relationship with Ambros and during those years, I learned a great deal and we certainly achieved a lot, together.

“Much of what I picked from him will remain, but I also want to create my own style of handball with this team,” says Danyi who will be assisted by 63-year old Zdravko Zovko (Croatia), a former head coach in Györ.

“We have developed a good relationship over the past 20 years. He is a very experienced coach and it is no coincidence that we are working together again.

“We think the same way about handball and that’s the basis for any successful cooperation,” he says.

Keeping all the stars happy

Another risk Gabor Danyi will be facing in his new job is to make all the stars work as a unit. The long line of outstanding players did not become any shorter when compared to the 2017/18 season – to the contrary.

“That does not put any pressure on me.

“During the past few years, I have experienced what it takes to work with such a talented team like Györ, where we have to win all our games – it’s not easy, but we can handle it.

“Certainly, there will be room for all our players.

“The style of handball I want to play with this team will be different from previous seasons.

“I am creating a new playing system, where every player will get time on the pitch and show her potential.

“I am talking about 10-15 minutes long periods because of the intensity and swiftness, which I want to see us play. We have two quality players for each position and that makes our job so much easier,” he explains.

But, there is at least one position where he no longer can claim having two world-class players at his disposal.

At a recent, emotional, press conference a tearful Yvette Brooch announced her sudden and surprising career stop. Her decision leaves Gyor with Norwegian newcomer, Kari Brattset, as the only line player with meaningful experience on the international level.

Gabor Danyi is well aware that a replacement for the Dutch international will be difficult to find, so close to the start of the season.

“First of all, I am really sad that Yvette won´t be a part of our team this season. She is a very valuable player on- as well as off the court.

“However, I think every problem has a solution to it and we are looking to resolve this issue, right now.

“We have to see if we can find a player who fits with our style of play, who is available and who can replace Yvette successfully.

“Still, we have a very strong and attractive team – I am convinced that we are going to find the perfect substitute,” says a confident Gabor Danyi.

While facing some obstacles, Danyi can be pleased when looking at the group phase of the upcoming Champions League. Gyor’s opponents in the early part of the season will be German champion, Thüringer HC, Slovenian title holder, Krim Ljubljana and one more team emerging from the qualification round.

“Obviously, the group stage looks much easier for us compared to last year, but we do not underestimate any of these teams – it would be a big mistake,” says the new head coach, who doesn’t want to look any further.

“We always try to focus on our next opponent and that’s why I do not want to speculate about what will happen in the main round.

“It’s too early to tell – never mind talking about favorites – as long as not a single game has been played,” says Gyor’s Gabor Danyi.