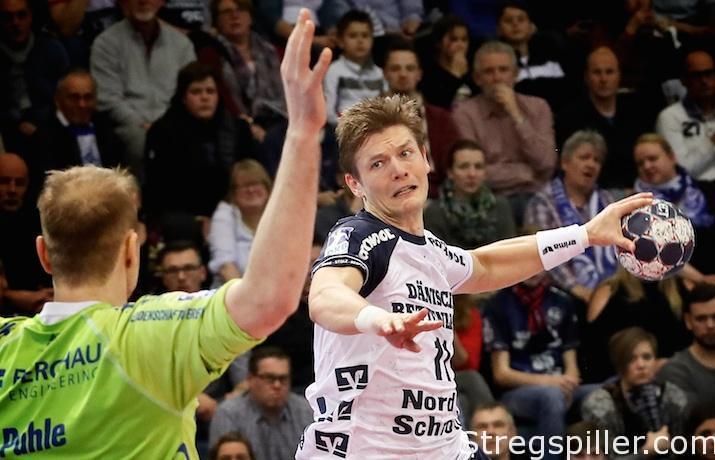 Will Barcelona feel the pressure?

PREVIEW – MATCH OF THE WEEK – GROUP A – Even though they continue winning, FC Barcelona still have Paris Saint-Germain two points behind them in the battle for the top spot in the group.

Another victory in Sunday night´s home match against Flensburg should come easy, however.

After PSG´s victory on Saturday against Schaffhausen, Barcelona will need two points in order to hold on to first place, which will let them skip the round of Last 16 and proceed directly to the quarter-finals.

Succeeding in “Palau Blaugrana” is usually no problem to Barca, and a depleted Flensburg team should not represent a significant obstacle.

The North German injury list is so long, that Flensburg nominated two youngsters for the fight in Spain.

While 17-year-old right-back Jannek Klein already had his debut – he got some minutes in the recent away game against Wisla Plock – 19-year-old playmaker Robin Breitenfeldt will get his first Champions League experience.

Ljubomit Vranjes has guaranteed that both will get court time, a good indication of how low his hopes are before the match in the capital of Catalonia.

It is not that Flensburg have not prepared thoroughly, though.  The German delegation arrived in Barcelona, Friday night, already.

Few people, who watched the first match between the two teams this season have not forgotten Barcelona´s buzzer beating 28:27 because of Thomas Mogensen´s unfortunate mistake.  On Sunday, Mogensen will not be able to play any role, positive or negative, as he is one of the many injured players.

The aforementioned win was Barcelona´s fifth in seven previous matches against Flensburg on the European stage.

Flensburg have been able to defeat mighty Barcelona only twice.  However, one of the two victories won’t be forgotten in Flensburg, and probably neither in Barcelona (although the Catalans would probably want to).

It was the memorable Champions League semi-final in 2014, when Flensburg succeeded 41:39 after two extra time periods and a penalty shoot-out.

Duel of the Match – Part One: Lazarov vs Glandorf

Although he has young Jannek Klein as backup, Holger Glandorf is the “lone rider” on Flensburg’s right-back position, and he is almost doomed to lose the battle against Kiril Lazarov.

In the first encounter between the two teams this season, however, Glandorf found the back of the net six times.  Flensburg will need at least a similar result from their left-handed veteran this time around, if they are to have a fighting chance against the Spanish champion.

We all know what future Nantes player Lazarov stands for, and if he is firing on all cylinders on Sunday night, he will be only one of many reasons why Flensburg will have a tough evening.

Duel of the Match – Part Two: Tomas vs Svan

In a game with a multitude of world-class players, two of the best right-wings will showcase their talents.

Flensburg will have to rely on a strong defense, hopefully resulting in some counter attacks.  Lasse Svan will be crucial, and if he is successful running fast breaks and from the wing when attacking, Flensburg may be able to stay in the game until the end.

His counterpart on Barcelona’s right-wing is legendary Victor Tomas.  He possesses exactly the same qualities as the Danish international and either player has the capacity to decide the game on their own terms.

Duel of the Match – Part Three: Vargas vs Andersson

Lately, Gonzalo Perez de Vargas has done brilliantly for Barcelona, and he may even feel some internal competition from Borko Ristovski who has shown some stellar performances himself.

However, I still give 38-year-old Mattias Andersson the edge.  His performance in the 34:33 defeat at home against PSG, last Saturday may not have been breathtaking, but the experienced Swede is usually a guarantor of world-class goalkeeping.  Certainly, he will have to be at his very best on Sunday evening.

As mentioned above, this makes way for the two youngsters Klein and Breitenfeldt.

While Flensburg lost 34:33 at home to PSG in their most recent Champions League match, Barcelona had no problems disposing of Kadetten Schaffhausen, 31:24 on the road.

In the domestic “Liga Asobal”, Barcelona win every time they enter a court, and this was also the case this week.  However, the match against fifth placed Cuenca turned into a modest 27:23 victory.

Flensburg took both points during the week, when Hannover-Burgdorf were defeated 30:25 at Flens Arena.

The club from the north of Germany is doing considerably better in the Bundesliga, where they are number one, compared to the number four spot in their Champions League group.

There is no doubt that Barcelona is the huge favorite in “Palau Blaugrana”.  I assign odds of no less than 80:20 in favor of Victor Tomas & Co.

On Saturday, Bjerringbro-Silkeborg pulled the biggest sensation in the Champions League so far this season, winning 24:21 on the road against THW Kiel.