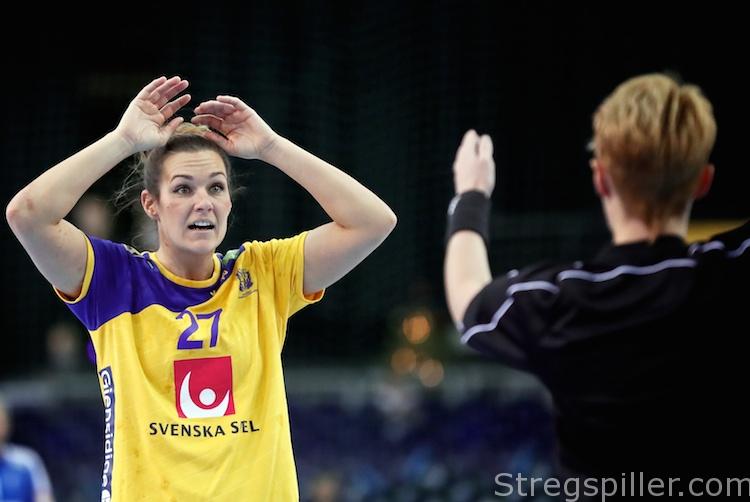 “We will do everything possible to win both games in Hamburg”

Sabina Jacobsen is one of the veteran players on the Swedish team, the defensive specialist was all smiles after the match against Denmark and a historic win, in the quarter-final of World Cup 2017.  When I talked to her in the mixed zone, she appeared calm and collected, and is looking for something more than just the trip to Hamburg. Could Sweden be the favorite after beating the defending champion, Norway, during the group phase?

Congratulations, Sabina, that was one heck of a match, especially after trailing in the first minutes. What’s your take on it?

SJ: Obviously it was quite difficult, because Denmark is a very good team. But I think we controlled the game. It was 13-11 at the break and in the second half we played really well – in my opinion. Then they began playing seven-against-six and we got into trouble, a little bit, as we didn’t score anymore. But then Hanna Blomstrand took over and we won the match.

The start was quite slow though…

SJ: I think this we will see more often, now that teams are tired after so many matches within a few days. But we used a lot of players, as we do have a deep bench.  We can substitute many players and that’s the main reason for the win today.

Actually, what did your coach say during the first time out? Because it seemed like everything changed after the first ten minutes of the match.

SJ: I don’t know what he said about our offense, because I usually focus on the defensive part.  On my end, he said that we should just trust our tactics a bit more. We did that and it became much easier compared to the first few minutes.

So far, you played very well during this tournament – you also defeated mighty Norway. What awaits us in Hamburg?

SJ: For sure, it’s going to be really tough, because there are only very good teams left. I think we have great chemistry within our team, a great team spirit, but it’s going to be very hard to finish on top. We will enjoy the victory tonight and maybe tomorrow as well, but  then we go to Hamburg and our focus will shift to just winning the semi-final.

Talking about trusting each other – will it help you to win the title, or am I wrong?

SJ: I don’t know, but the way the team flows right now is great. We will do everything possible to win both games in Hamburg, no matter what.