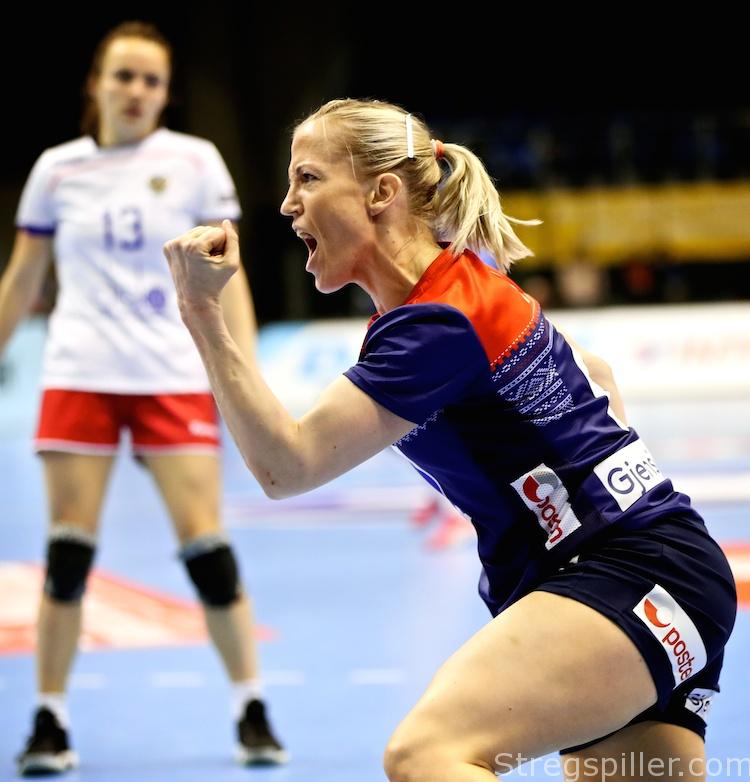 “It will be hard for anybody to beat us”

When the quarterfinal pairing between Olympic champion Russia and World and European champion Norway became official, handball fans around the world were looking forward to an intense, exciting and possibly epic match between the two rivals. Instead they got a lopsided game which the Scandinavians dominated from beginning to end. The final score of 34-17 was stunning and you have to fear for the worst if you are a supporter of The Netherlands. Norway’s veteran, Heidi Løke, looks ready for the challenge, when I talked to her after the match.

Heidi, congratulations, 34 to 17, it’s more than a result, it’s a serious statement?

HL: Thanks and yes, it was a fantastic match. It was really good and we executed what we had been talking about before the game. It was great defense and Katrine Lunde in goal was just fantastic.

Talking about Katrine Lunde, you know what it feels like coming back from pregnancy, and I don’t want to talk down any of your achievements so far, but she is putting on one monster performance after another…

HL: She’s just fantastic, she’s the best goalkeeper in the world, together with Kari Aalvik Grimsbø, obviously.  They are the two best.  It’s great to rely on defense, especially when you have two goalkeepers like they are.

When you are playing on this level in the quarterfinal is there any fear that you might peak too early and possibly wasted your best performance already?

HL: We are not like this. I think we have a great approach so far in this championship and we have been taking everything step by step. Of course, we also have some things that we need to improve on. But today, it was really a good match and if we keep this level in defense it will be hard for anybody to beat us.

Is there one thing you have in mind where you need to improve?

HL: Well, you always find some things to improve on, but maybe our shot selection.  It’s certainly more important not be too satisfied.  Sure, we can be happy today, but we have to think ahead. Against The Netherlands we have to be at the same level we showed today.

Were you able to watch some matches of The Netherlands during the tournament?

HL: Yes, a little bit, but not that much, because we have been focusing on ourselves.  They have a strong team and they have excellent players on all positions. It will be a tough and close match as always against The Netherlands.

As you said, The Netherlands have a good team, but Russia also is a quality squad and you just smashed them.

HL: Yes, but The Netherlands play very similar handball like us, for a long time now.  They have a good defense and they also like to run a lot.  It will be a high speed match with awesome defense and great goalkeepers.