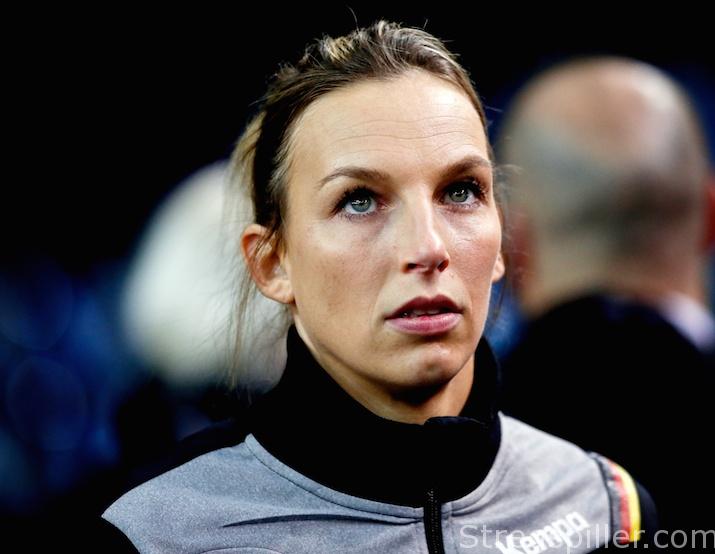 “It will be a very hot and intense match”

To be honest, it was not the most entertaining game in handball history, to say the least, when Germany routed a weak Chinese team 24:9 (10:3) at World Cup ’17, in Leipzig. The Asians had scored only one goal before the final minutes of the first half, as Clara Woltering stopped 77 percent of all the shots that came her way. But even facing rather poor opponents makes sense, as left-wing Angie Geschke told me after the game.

Congratulations to the victory today against China. Actually, how much is such a game worth considering the quality of the opponent?

AG: I don’t understand the question, because every game is worth something. It’s good practice for us. We learn in every match we play. I think we showed that we worked hard on our defense. We also focused on playing a little bit faster. We did that a bit better in the second half compared to the first. Against teams like China we set ourselves certain goals that we want to accomplish and then the opponent doesn’t really matter.

There’s nothing to complain about your defense, right now. It looks really fabulous and it will be tough to improve.

AG: Yes, I think our defense is working very hard when it to comes to moving the feet, and being aggressive. We are set up quite well.

Are you satisfied with seven points after four matches? Even though there still is room for improvement when it comes to your offense, you are still unbeaten.

AG: Yes, I think we can be satisfied, because we couldn’t expect it. Personally, I don’t care about the points – I want to win every game. I want to win two points against every team for our fans here in Germany. I guess the others have the same approach. I don’t look at the standings, but only at the next game and I focus on winning it.

Will the game against The Netherlands be totally different when it comes to tactics as your previous four opponents have all played a different style?

AG: Yes, it’s a different opponent, a really interesting opponent. It won’t be an easy game and I hope the arena will be sold-out, because the Dutch always bring a lot of fans with them. I think it will be a very hot and intense match