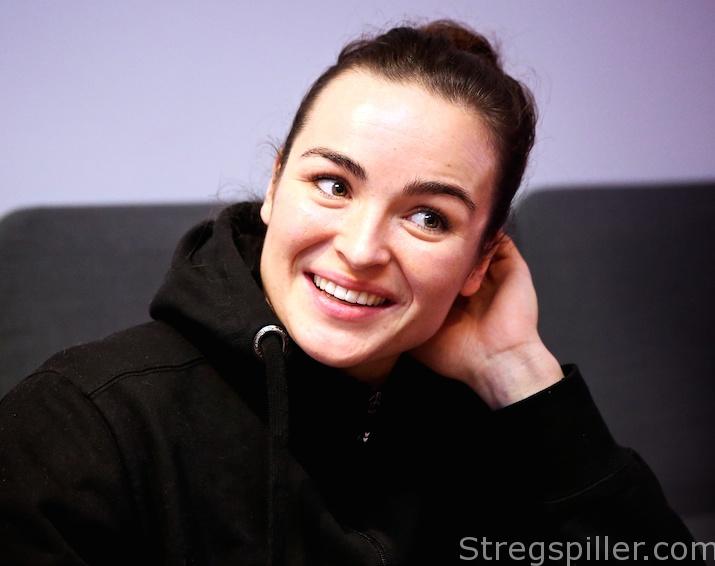 In the most recent match of the Netherland’s at EURO 2016, line player Yvette Broch celebrated her 100th international game, scoring six goals.
But she openly admits that she and her teammates will have to give 100% to reach the semifinals of the European Championship, in Gothenburg.

Players who are celebrating some kind of anniversary rarely play well on the occasion.  Monday night, Yvette Broch was certainly the exception to the rule.

As the Netherlands defeated Serbia 35:27 in their second main round match at EURO 2016, the 25-year-old line player celebrated her 100th international match by scoring six goals, becoming the highest scoring player on the Dutch team together with left-back, Lois Abbingh.

“It is fantastic to play international match number 100 for your country and celebrating it by scoring six goals makes it even more amazing,” the 185 cm tall, pivot tells stregspiller.com.

“The match was not as easy as it may have looked from the outside, but I felt that we were in control all the way. It is great that we have now placed ourselves in a position, where we can decide our semi-final ticket all by ourselves.  I think we deserve it after having played a good tournament so far,” she says.

While she is used to playing at both ends of the court in the Dutch national team, she is mostly defending in her club, Gyor, where she is in her second season.
More recently, this has changed, after Gyor’s number one line player, Heidi Loke, announced her pregnancy.  Now, Broch is also Gyor´s primary weapon in attack.

“Actually, I have been playing quite a lot in offense in the Hungarian league, but it is true that in the Champions League, I have mainly been defending, until Heidi became pregnant.

“Of course, it is a big loss to our team that she is no longer there, but it has been an advantage to me, and I feel that playing on the line in the Champions League has made me better.

“The Champions League is the greatest tournament of all, and I just love playing these matches – I feel that I have developed a great deal as a player,” she says.

Gyor was a big change

“When I joined Gyor last summer it has helped me in many ways.

“It was a big step up from Metz, where I played before, but it was certainly a change in other ways as well.
“Coming to a new country with a different culture and an entirely different language was a big challenge.  But fortunately, there were so many new players joining at the time, and the girls in Gyor are really nice – we were very well received.

“Finally, it has meant a lot to me that my teammate in the national team Nycke Groot is also playing in Gyor.
“She has been a really great help, especially early on,” says Yvette Broch who will be turning 26 on December 21, three days after the final at the European championship in Sweden.  It will be anybody’s guess if a European title will be on top of Yvette´s wish list.
But she is also dreaming of another championship – apart from winning Hungary’s domestic league – The Champions League.
Last season, she and her teammates got extremely close to winning Europe’s top prize in club handball for the third time in four years, but they lost 26:29 to Champions League debutants CSM Bucurest, after a dramatic penalty shootout.

“I hope we will at least make it to the FINAL4 again, but there are many good clubs left in the Champions League this season.
“In our main round group, we will be up against Esbjerg, who are Danish champions and who have two of my national teammates (Laura van der Heijden and Estavanan Polman, ed.) in their team; plus FC Midjtylland and Krim are also very strong competitors, so our group is certainly not easy,” she finds.

Life in the fast lane

She acknowledges that things have been moving quite fast for her during the past twelve months or so, especially in the national team.  It still is a bit difficult to come to terms with all that happened over such a short time period.

On the national team, she and her teammates took everyone by surprise, winning the silver medal at the 2015 World Championship, in Denmark, and this summer, the Netherlands reached the semi-final at the Rio Olympics.

“Life has been moving really fast, and I do not think that I have really understood yet, what we have achieved.
“Henk Groener, who was national coach for the past eight years, before he stepped down this summer, can take a lot of credit for this, of course.
“He took us from zero to the level where we are now.  Having said that, Helle Thomsen, who succeeded him at the beginning of this season, has also done fine, so far.

“Of course, a new coach always means changes, but I am really happy with Helle.  She has added a fresh spirit to the team,” says Yvette Broch about the Danish coach who is on a three months contract, expiring at the end of EURO’16.

“I do not know yet, if she is going to continue with us, but I think that this will be decided right after the tournament,” explains Yvette Broch.

Spain will not be easy

Although, she is dreaming of another medal at this European Championship – preferably a golden one – she also recognizes that this wish is still far away.  Even the thought of reaching the semifinals, which appear to be so close right now, will be very difficult, she believes.

“Our match against Spain this afternoon will definitely not be easy.
“Spain may not have anything at stake anymore, but I am sure that they will want to end the tournament in style and go home with a good feeling.

“The other day, we saw them giving Germany a hard time, denying them an important point (the game ended in a draw – 20:20, ed.), and I certainly do not expect them to make it any easier for us either.

“Collectively we will need to give it 100%, all the way, in order to get to the semifinals”, finds Yvette Broch.