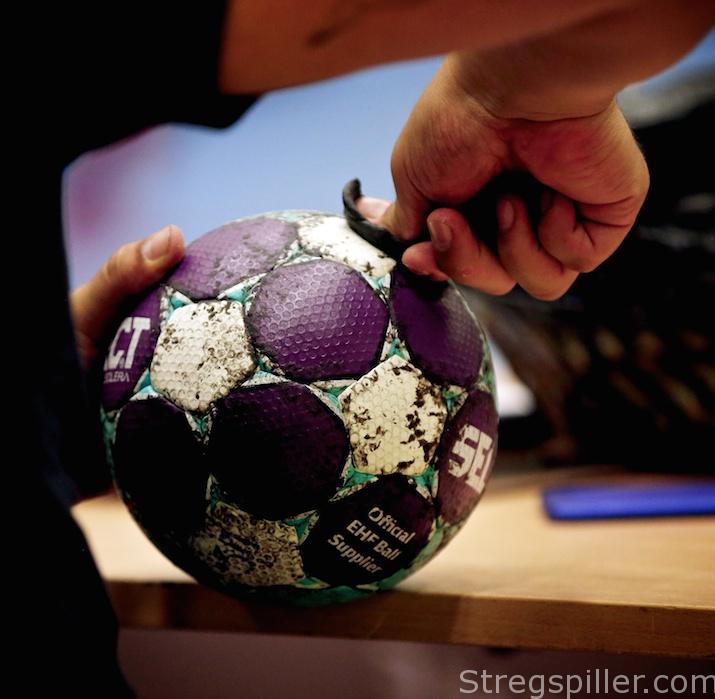 INTERVIEW – Despite her team having changed owners, Sabine Englert did not hesitate extending her contract with FC Midtjylland.

Next season will be her 10th in Central Jutland – the place where the 36-year-old German goalkeeper expects to end her career.

The fact that FC Midtjylland will change ownership and name as of next season – the football club no longer wanted to cover the deficits of the handball division – did not impact the decision of Sabine Englert when she signed up for Herning Ikast Håndbold, the successor organization of her current club.

“When I signed, I did not know that much about the new set-up here.

“I only knew we were going to be independent of the football division, but I did not regret for one second that I decided to extend my stay.

“It is a great place to be, and everyone is very nice. This includes players, coaching staff, the people in the office and the many volunteers.

“And it is not going to change because of a new name and ownership, I am sure,” the 36-year-old German goalkeeper tells stregspiller.com.

Next season will be her 10th in the club, located in the small town of Ikast.

“There may have been more lucrative offers from foreign clubs at a higher level, but I really like the environment here – I have never really been tempted to leave,” she explains.

However, as it is common practice for Englert, she only signed on for one year.

“I am not really sure why I always extend my contract for just one year.  It probably has something to do with the fact that I am never really sure how long I will keep playing.

“I have some pretty serious back problems, but after consulting with a good specialist, I found the right treatment; and in combination with a reduced amount of training, it allows me to go on at top level.

“Still, I do not know how long I would like to continue.  And it would not be fair to the club, if I prolong my contract for three years or so, and then lose my motivation after one.  It is better this way,” says Sabine Englert who works as a bookkeeper and plays tenor saxophone in a band besides playing handball.

After a long handball career, she admits that it takes a bit extra to motivate her – the Champions League, for instance.

“Even though I have played many Champions League matches over time, these games are still an important part of what keeps me motivated.

“Every time I hear the Champions League anthem before a game, it is something particular, and it always triggers a special feeling,” says the former German international who admits that it will feel a bit empty, if Herning Ikast Håndbold should not make it to the Champions League, next season.

Not an unlikely scenario as Midtjylland missed a first chance not winning the Danish league.  Therefore Herning Ikast´s only other opportunity to play in the most prestigious club tournament is succeeding in the Danish championship.

“Of course, I would not like to miss the Champions League, not even for one season.  But as long as we still have the chance to qualify as Danish champions, I believe in our team – although I admit that it will be difficult, considering how many players we are missing at the moment.”

Certainly not an exaggeration when considering players such as right wing, Anne Mette Pedersen, backcourt player, Tonje Løseth and line player Juile Gantzel  (all injured), while the other two line players, Linn Blohm and Sabine Pedersen as well as backcourt player, Trine Troelsen are all out on maternity leave.

“It forces the rest of us to step it up and move closer together and it increases my responsibilities, which I like.

“I really do believe in our chances in the championship play-offs, but before that, we have to make sure to get there.”

Danish derby will define the season

If Midtjylland can keep on going in the 2017/18 Champions League will be decided this upcoming Saturday.

Provided that Krim Ljubljana will lose their away match against Györ – which they most likely will – a home win against Danish champions Nykøbing Falster Håndboldklub will send Midtjylland to the quarter-finals.

Any other result will mean that Nykøbing move on to the next stage in their maiden Champions League season. The encounter between Györ and Krim will have just ended before the game between Midtjylland and Nykøbing – so both teams will know what they are playing for.

“We will have to win – it is as simple as that,” says Sabine Englert with a laugh that’s so characteristic of her.

“I also realize that I will have to be at my best, and that’s what I intend to do,” she says.

Vardar Skopje, the club that reached Champions League in 2017, will await the winner.

The Macedonian champion was also Midtjylland´s opponent in the quarter-final last season, and on that occasion, the Danes were “in” the FINAL4 but for a few minutes only.

After having lost the first leg at home (26:28), Midtjylland were leading by three goals early in the second half at Jane Sandanski arena – but Vardar turned the tide, and won 26:24, booking the ticket to the season ending round in Budapest.

“I must admit that I am not thinking as far ahead as the quarter-final yet.

“Right now, it is all about getting there, but our quarter-finals last year showed that every handball game has to be played first before you know the result.

“So, if we get the opportunity to play against Vardar in the quarter-final again, we will obviously fight for our chance,” says the veteran goalkeeper.

National team – no thanks!

It has already been many years, since Englert quit the German national team, and not even a 2017 World Championship in her home country, could change her mind, not for one second.

Now, Germany has a new national coach – Henk Groener who performed miracles with the Dutch national team.  He will rebuild, after the retirement of a large number of players, including another experienced goalkeeper, Clara Woltering.

Still, Groener would get a “thanks, but no thanks” from Englert, in case he’d get the idea of calling her.

“The physical strain would be too much for me, as things are.

“Henk Groener is forming a new team with younger players and that is exactly what he should do.

“Seriously, I do not know how long I am going to continue, and if next season will be my last.

“But I am sure, that no matter what, I will be ending my career here in the moor of Central Jutland,” says Sabine Englert.