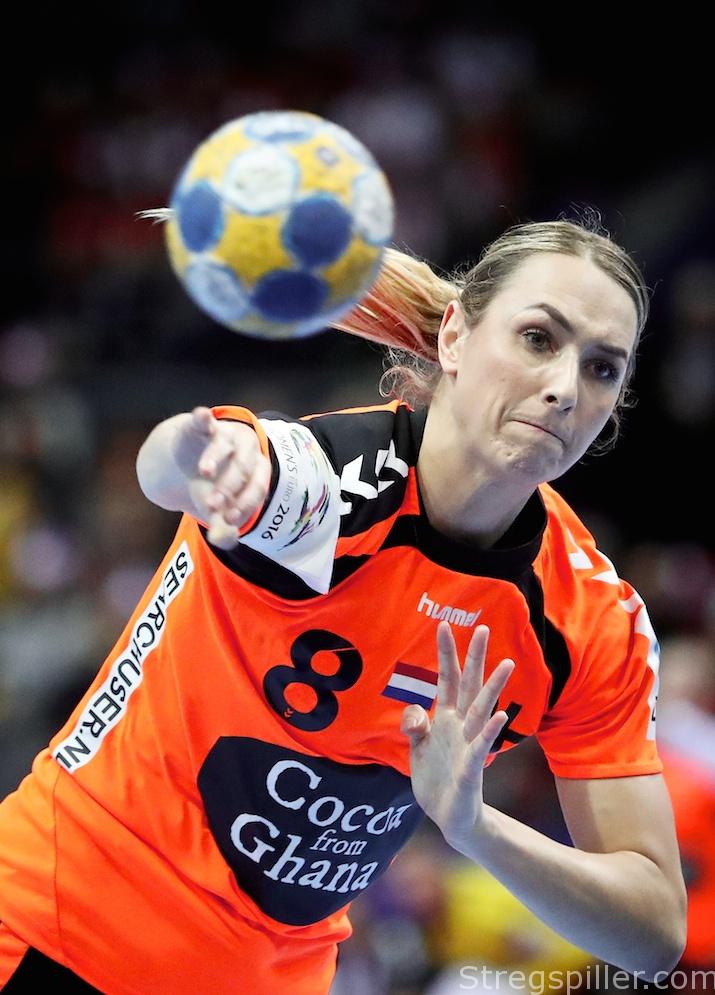 “Winning in Germany would be just perfect”

In basketball, the most exciting stars play “above the rim”, in handball they shoot from way beyond the 9-meter perimeter.

Lois Abbingh, the Dutch international, is one of the elite few, blessed with the talent and skill to score from long distance.  Enjoy reading what the sharp-shooting back-court player from Issy Paris has to say about playing in the Champions League, fighting for precious metal at the 2017 World Cup in Germany and her former club, VfL Oldenburg.  One thing for sure – it’s great having people like her in handball.

How do you rate your handball experience in France so far, especially compared to your time in Romania?

LA: Here (in Paris ed.) it’s quite different compared to Romania.  In Baia Mare, I was busy with handball 24/7, doing something that was connected to the club all the time.  We trained twice a day and we had lunch together.  We also watched videos and had other things to do.  We had just one goal in mind during training – preparing for our next game in the Champions League, on the weekend.  The Romanian league was tough as well because of its schedule and the travelling involved.  Playing there was the best handball experience I have had so far with a club.  The fans and the atmosphere in the arena were just so cool.  But there were financial problems as well, and that was quite tough.  Off the court I made some really good friends.

When I came to Paris it was totally different.  Everything is organized very well and the people are extremely nice.  Handball is different here.  There’s not the pressure of playing in the Champions League. Sometimes I miss it.  But the two years in Baia Mare were quite tough and after the Olympic games in Rio, I really needed some time to regenerate.  After my injury in 2014, I really felt that the stress over the last two years was quite high for my body.

Playmaker Stine Oftedal will leave Paris after the season, and there will be other changes as well.  How do you see your own future?

LA: Sure, our team will be a bit different and with Stine we will lose a world-class player.  But we will also have some very good, new players joining us here in Paris and I’m sure we will be able to play with the best once again.  I also hope that we will be able to do better in Europe, because we lost to Erd (Hungary) very early this season.  Still, the French league is quite strong and a lot of fun – no match is easy.

Is the Champions League a must-have for you or can you live without the stress?

The Dutch national team is very close to winning a title.  Will it happen 2017 at the World Cup, in Germany?  Or does it even have to happen?  What do the federation, the fans and you personally expect?

LA: Obviously, I hope we can fullfill our dream in Germany, but it’s not a given that we will win a medal at every tournament.  It’s something we are fully aware of.  There are a lot of good teams around and it’s the small things that make the difference, of winning a medal or finishing sixth.  The expectations in the Netherlands are quite high.  We try to start every tournament from zero, hoping to inspire the fans with our way of playing handball.  The World Cup in Germany obviously would  be a great event to make it happen, because a lot of Dutch fans will come to Germany to watch the games.  And I’m also looking forward to coming back to Germany for the World championship.

The way women’s handball is played today a lot of the top teams tend to use more mobile and smaller players in the back-court.  Ambros Martin (Györ) and Thorir Hergeirsson (Norway) are just two coaches who have moved in this direction. How do you see this development as one of the few taller players who can score from ten meters out?  Asking you more directly: Is your type of handball player something of the past?

LA: Sure, you can see that something has changed over the last years, but I still think that many of the best players in the world are tall and can shoot well (smiling).  Take for example Neagu, Amorim or Penezic. It’s always good to have a player on your team that can score from ten meters.  Usually, it creates more space for teammates.  But, I also try to develop other qualities, like going 1-on-1.  For me it’s quite an advantage that I can score from distance.

Your former club, VfL Oldenburg, where you took a huge step forward in your personal development, has to save money yet again.  Are you following what’s going on there or are you too much of a professional to be involved emotionally in any way?

LA: I follow the development in Oldenburg, for sure.  I’m still in contact with Leszek Krowicki (coach ed.) and I was there attending a match some months ago.  It’s quite a shame that they have to start from zero, yet again.  After Beluga (a former sponsor ed.) left the club, everyone worked quite hard and finally, when they found a way to do without them, they had other problems coming up.  But I do hope everything will work out in the end because Oldenburg needs handball.

A lot of very good players are coming from the Netherlands. Why isn’t it possible to have a decent club team based in Amsterdam, for example, that can compete in Europe?  In Macedonia, Montenegro or Slovenia they have just one outstanding team as well.

LA: I don’t think there will be a competitive team developing in the Netherlands, in the next years.  We have talked about it some years ago but the league in the Netherlands is just too weak and not really professional.  Maybe it will be possible in the future because we are successful with the national team.  Now, more people in the Netherlands know about handball and maybe that will make it easier to find sponsors.  Maybe it will work in the future, but I don’t think that I will be playing at the time.  Still, there are people trying to make the league more professional.