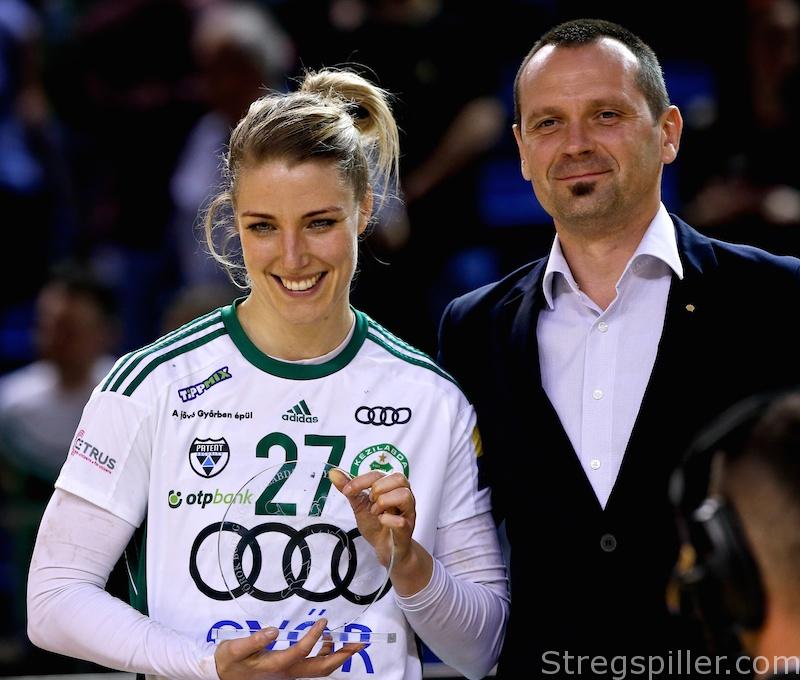 “Winning titles will never get old”

INTERVIEW – Despite all the cups and precious medals, Nycke Groot collected in Györ over the past four years, she’s still hungry for more.

In this exclusive interview with stregspiller.com, she realizes that winning the Champions League may not be a given, once she joins Odense, but she expects to lift that very trophy with the Danish club at some time in the future.

For now, her goal is to defeat Odense in the quarterfinals of the 2018/19 Champions League.

Almost three weeks ago, Györ Audi ETO KC won yet another title in, what seems to be a never-ending series of national and international triumphs.  In Hungary´s second largest city, Debrecen, they succeeded in the Final4 of the Magyar Kupa. It was the 14th time in the history of the event that Györ lifted the trophy.

Of course, they did celebrate the victory, but it was only the first success of the season with a few more to come?

For example, in the second week of May, the FINAL4 of the EHF Champions League will await in Budapest.

OK – before making the trip to the capital a “small obstacle” named Odense HC will have to be removed in the quarter-finals.  And, right now the two matches in Europe’s premier club event appear to be a mere formality for mighty Györ.

But, for one of Györ’s players, the quarter-final tie against Odense may be special.

After four years in Hungary, Nycke Groot will return to Denmark, where she played for seven years before joining the handball powerhouse.  From next season on, Odense will benefit from her skills.

“I am looking forward to playing the quarter-finals and especially the match in Odense – my future home ground.

“But, I am even more focused on winning there,” 30-year-old Nycke Groot tells stregspiller.com.

Still titles to be won

She denies that her ambitions to win titles have diminished after the success she enjoyed in Györ.

“It’s always special to win titles with the team I am playing for at the time. Those crucial matches are the kind of games for which you don’t need any extra motivation. These are the games when the adrenalin kicks in by itself,” she explains.

Competition at the top of the Danish league will be considerably tougher compared to Hungary and the Champions League trophy will be out of reach, at least in the beginning.

“I believe there are still prizes to be won in Odense as well. Only the Champions League title may be a bit out of reach, but I do hope that we can qualify for the FINAL4 already next season.

“Anyway, I am looking forward to go back to Denmark.  Already last year, I felt how much I missed the Danish culture and the friends I have in Denmark,” she states.

For sure, Györ will survive the departure of their Dutch star as they found a highly qualified replacement.

On Sunday, Odense should not expect to receive any gifts from their future key player, when the two clubs clash in the first leg of the  EHF Champions League quarterfinals.

Like most others, Nycke Groot sees Györ as the favorite over the course of two matches.

“I think we have a better and more experience team. So, we should win and proceed to the FINAL4.

“Having said that – I never underestimate any opponent and I am sure we will have to fight and be smart in both games,” finds the former Dutch international.

This winter, she announced the end of her career with Team Oranje, to limit the physical strain.  So far, she has no regrets and she does not miss playing for her country.

“I still feel it was a good decision and I do not think that I will change my mind.

“But, of course, you should never say never!”

At the moment, she is fully motivated and has no second thoughts how she wants to end her four-year long spell in Györ.