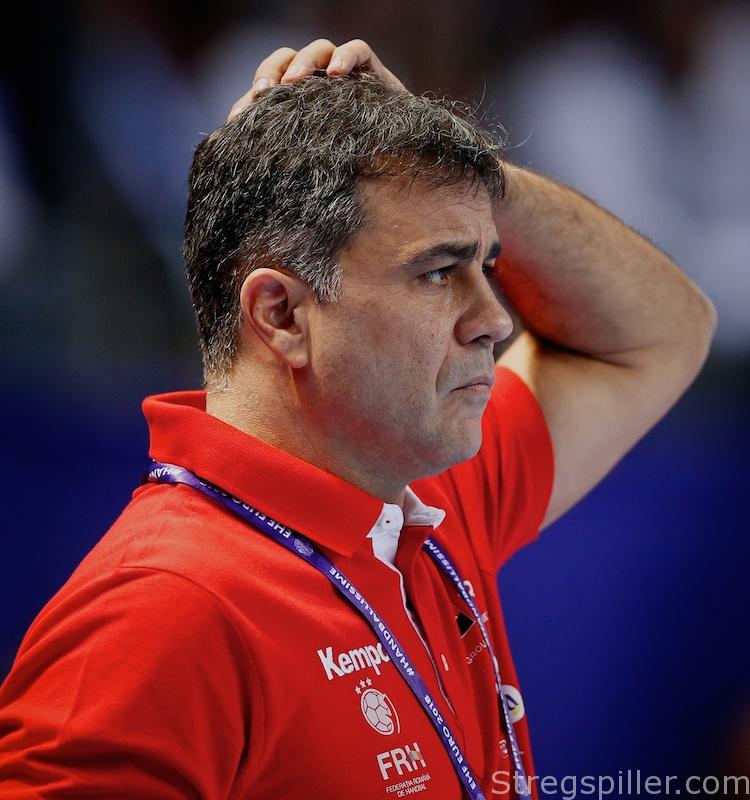 “Without her the task before us will be even tougher”

INTERVIEW – Ambros Martín sees no conflict of interest coaching two teams at the same time – Romania on the national level, while being employed at Russia’s top club, Rostov-Don.

According to Martin, working in two different cultures is inspiring, as well. On Friday, he’ll guide Romania’s national handball team through a difficult semi-final at the EHF European championship.

Taking care of two jobs has often created issues for many coaches not only in handball.  Being in charge of a club- and a national team at the same time can present challenges, but not for Ambros Martín.

For the past two years, the 50-year-old Spaniard has been in charge of Romania´s women´s team, while coaching top clubs – Györ (Hungary) and since the beginning of this season, Rostov-Don.

“I find it easy to combine two jobs and I don’t feel I could let one go for the other,” he tells stregspiller.com.

Right now, all he is focused on is the semi-final against Russia, on Friday, in Paris. Unfortunately, he will be missing his greatest star – Cristina Neagu – who a damaged her anterior cruciate ligament in Romania´s last main round match, against the Netherlands.

“Without her the task before us will be even tougher than it would have been otherwise.

“However, she’s still with us and she’ll provide the spirit we need, to play a good game of handball. Every player will have to make an extra effort – we know that we are meeting a team that plays on a very high level.

“In this championship, Russia have shown their true level again.  Last time we’ve seen it, was at the 2016 Olympics, when they won gold. I expect us to play our best game so far in the tournament, to be able to beat them,” says Ambros Martín.

“We’ll also play for Cristina (Neagu, ed.) not the least because she is a player who gives everything for her team and for her nation.

“She has been a big part why we are in the semi-final and we would really like to win this gold medal for her.

As he is coach in Rostov-Don, Ambros Martín, will be facing quite a number of players he’s intimately familiar with.

“It won’t be a problem for me, as he will not be on the court. It will be the players of the Romanian team I have to worry about,” says one of his Rostov-Don players, Anna Vyakhireva with a laugh.

“That’s a problem. I know them and I know what kind of handball they are capable of playing.

“We cannot stop them completely, but I have to try and put some pressure on them to make them less efficient than usual and create situations that may make them nervous.

“If we can succeed with this strategy, we may have a chance to win,” says Martín who also thinks that his knowledge of the Russian mentality can be an advantage.

“Yes, it can be a benefit – but, first and foremost, I have to prepare for their will power to win games.

“They are winners and they enjoy what they do.

“All their players have a real compassion for their national team and when you add this type of feeling to their winning spirit, you’re looking at a squad that’s very difficult to beat,” he says.

Obviously, he has also been able to spot the difference between the Romanian and Russian mentalities.

“There definitely is a difference in mentality, but to me those differences are interesting and I can really learn from it as a coach.

“For instance, I am still learning to understand how my players in Rostov think and feel.  Dealing with and addressing such differences help me to improve as a coach,” finds Ambros Martín, whose objective with the Romanian team is very clear.

“I want us to go to the Olympic Games and once we get there, we want to play for something meaningful. That’s my professional and my personal goal for the Romanian team, while at the same time, I want to go far with Rostov-Don in the Champions League.

“Some may not like it and I am sorry for it, but I cannot just work as a national coach.

“I also need to practice handball on the club level and I am grateful that the Romanian federation has provided me with this opportunity,” says Ambros Martín.