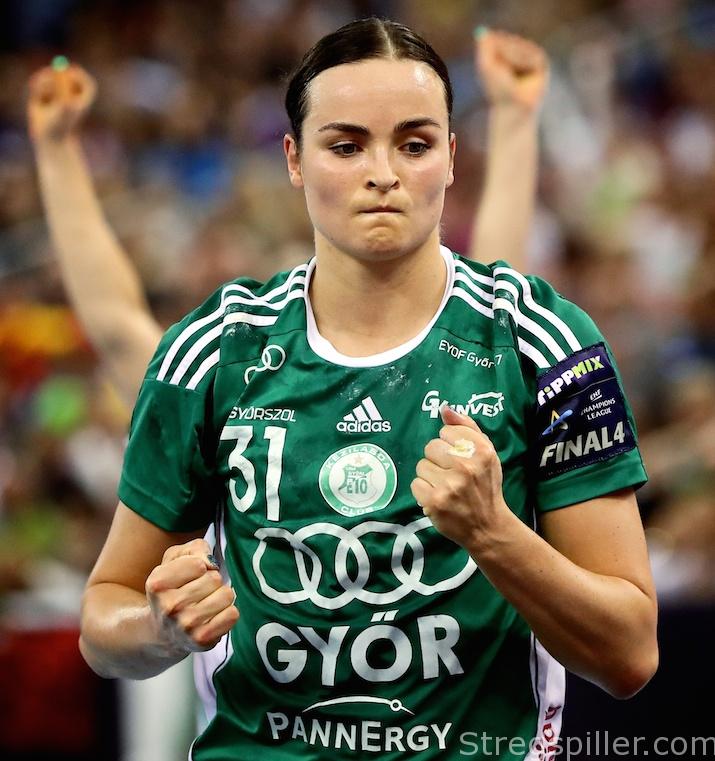 Including two of the top favorites (Gyor and Rostov-Don) as well as last season’s quarter-finalist, FC Midtjylland, and French newcomer, Brest Bretagne, Group B looks to be the most explosive on paper.

Today’s, Group B brings back all the memories of Group C of the 2016/17 Champions League campaign, when Gyor, CSM Bucuresti, Rostov-Don and FC Midtjylland were competing for three main round spots.  Eventually, Rostov exited the tournament prematurely – surprisingly.

This time, three of the teams – Gyor, Rostov and FCM – will meet again, while CSM have been replaced by the French Champions League debutants, Brest Bretagne.

Now, the three teams that will emerge from this group will run into CSM, in the main round.

Gyor are favorites, but…

Defending champions Gyor Audi ETO KC appear to be the strongest team among the four clubs – at first sight.

The arrival of Stine Bredal Oftedal (playmaker) and the surprising change of mind of veteran line player, Anja Althaus (she had announced her retirement after Vardar’s loss in the 2017 Champions League final match), have made an already deep and versatile squad even stronger.   And when the third addition – currently injured left-back, Anne Mette Hansen – gets fit again, the Hungarian side looks outright intimidating.

Gyor already looks frightening when considering the likes of Nycke Groot, Eduarda Amorim, Nora Mørk, Anita Görbicz and Kari Aalvik Grimsbø – all of them are still there.

Continuity at the club level is further emphasized by charismatic and successful head coach Ambros Martín.  He is still in charge, but Gyor have not always felt comfortable with being the favorite.

And as we all know, the defending champion is the one team that everyone wants to beat.  Therefore, this year’s group phase will probably not be as smooth as Gyor’s club officials would like to see it.

The arrival of the 25-year-old playmaker from Issy Paris has given Ambros Martín yet another option in his back court line.  Now, he will be able to use Nycke Groot as back-up to Eduarda Amorim, until Anne Mette Hansen is fit again and Zsusanna Tmori returns after her recent injury.

More importantly, Oftedal is known for running a fast play of attack.  She will add even more speed to Gyor´s offense, and fellow international, Nora Mørk (right back), won’t be the only beneficiary.

I still recall Anja Althaus in tears on the podium at the press conference after the 2017 FINAL4.

Althaus was moved by a spectacular career ending performance in the final match against Gyor.

Four weeks later, however, she was presented as new line player by the very same club.

At the age of 34, he experience speaks for itself, and it is beyond any doubt that she will be a great addition on the line next to Yvette Broch.

It will be a while before we will see the 23-year-old Danish in active duty for Gyor again.

Having torn her cruciate ligament in an early league match, the hard-shooting left-back and tough defender is sidelined for most of the fall.

Fortunately, she has “only” torn the posterior cruciate ligament in her knee – not the anterior – and there is some hope for her to be back before Christmas.

Once back on the pitch, she will be a highly qualified backup to Eduarda Amorim on the left back position and several of Gyor´s opponents will also be shocked by her tough defense.

Anything less than another FINAL4 appearance will be a deep disappointment.

“And quiet flows the Don”, reads the title of the epic novel by Mikhail Sjolokhov.

The Don was flowing a bit too quiet last season, when the Russian champions bowed out after the group phase already.

Winning the EHF Cup later in the season somewhat compensated but was a far cry from the ambitious goals of the Russian club.  This year they hope for revenge.

With French, Frédéric Bougeant, in the hot seat, Rostov-Don appear to have found the right coach, and not even the absence of Vladlena Bobrovnikova and Anna Sen due to pregnancy will disturb the promising picture of Rostov as one of the hottest contenders this season.

They may have lost a fantastic goalkeeper in Katrine Lunde (she returned home to Norway and now plays for Kristiansand), but Brazil’s Mayssa Pessoa is a highly competent replacement.  And the signing of Katarina Bulatovic (former Buducnost) only adds more quality to Rostov´s offense.

She will be turning 33 in November, but “Katarina the Great” is still going strong.

After leaving Buducnost over the summer, the elegant but powerful right-back is looking to make her mark in Rostov, where she will a key player and instrumental in taking the Russian champion to the FINAL4.

We stay on the right side.

With Bulatovic joining the team, Vyakhireva may not play as big a part in Rostov’s offense as before, but she has the advantage of occupying right wing as well.   There is no doubt that Frédéric Bougeant will find the right spot for this fast and technically skilled talent.

Filling the footsteps of Katrine Lunde is no easy task, but 33-year-old Pessoa should be able to do it.

Having appeared in the Champions League final in the past two seasons, the 2013 Brazilian world champion knows how to bring a team close to and over the finish line.

Rostov-Don should definitely reach the FINAL4.

The “Wolves” from Central Jutland managed to win all of their three home games in the group phase!  As a reminder these encounters included no less than the top contenders for winning it all – CSM, Rostov-Don and Gyor.

This time, Midtjylland get another chance for repeat performances against two of the aforementioned teams – Gyor and Rostov.

Both clubs should be warned by now, although they will face a much weaker Midtjylland squad.

Meanwhile, key players such as left-back and playmaker, Stine Jørgensen, and right wing, Trine Østergaard have left for Odense.  And Louise Burgaard is the only left-handed back court player after the departure of Icelandic Rut Jonsdottir.

Personnel changes do not stop there, however.

Shortly before the start of the 2017/18 season, Swedish international and defense specialist, Sabina Jacobsen, joined CSM Bucuresti, even though she had two years left on her contract.

It may have been a good deal for Midtjylland, if they would have received a fat transfer sum for the Swede.

But they did not get a cent.  They let her go for free.

Head coach Kristian Kristensen deserves much credit for continuing his work, given such dire circumstances.

New players have been brought in to fill the gaps, and while it will be interesting to see if “comeback kid”, Trine Troelsen, can still contribute at the highest level, the return of right wing Anne Mette Pedersen from København Håndbold looks even more promising.  And so do the arrivals of the two Norwegian back-court players – Tonje Løseth (Metzingen) and Helene Fauske (Stabæk).

On the line, Sabine Pedersen can look forward to some extra work, after Swedish international Linn Blohm announced her pregnancy.

After four years with København Håndbold, 23-year-old Pedersen has returned to Midtjylland.  She will be trying to fill the gap Trine Østergaard left, after her departure to Odense.

Of course, Pedersen may be no Trine Østergaard when running fast breaks.  Still, her skills in offense puts the right wing position is in very good hands.

Personally, I do not understand why national coach, Klavs Bruun Jørgensen, has not yet looked at Pedersen as backup for Østergaard in Denmark’s national team?

This 20-year-old Norwegian girl is an interesting addition.

Being able to cover virtually all three back court positions – although she is at her best as playmaker – she has been referred to as one of the greatest talents in Norwegian handball, at the moment.

That, already, says something.

She has joined from Stabæk (Norway), where she was the club’s top scorer.  If she can continue her already impressive development in the Champions League, Midtjylland’s chances may be on the rise as well.

The “old” German lady in goal is still an integral part of the team.

Without Englert between the goalposts, Denmark’s runners-up over the past two years, would not have been nearly as successful.

35-year-old Englert has a principle of only signing one-year contracts, avoiding unpleasant surprises.

And she still could be a meaningful reinforcement for the German national team, if only she would make herself available.

FC Midtjylland should make it to the main round, and with a little bit of luck, they might repeat their 2016/17 achievements and reach the quarter-finals.

Brest – runners-up in France last season – is one out of five debutants in the 2017/18 Women´s Champions League – and certainly a very interesting squad to look out for.

The women´s league in France has reached rather high levels over the past few years, and the number two club, behind Metz, deserves respect.

When you look at their mix of experienced players and promising talents, respect gives rise to admiration.

International top talent such as Allison Pineau and Marta Mangue are the obvious and essential figures in a team, that was further reinforced with the arrival of Swedish internationals Filippa Idéhn (goal) and Louise Sand (left wing) as well as Serbian star line player, Sladana Pop-Lazic, who joined from French champion and league rival, Metz.

It will be really thrilling to see what the squad from Brest can do in this tough group, especially once Allison Pineau is back on the court, as she is still recovering from a foot injury.

After spending her entire career back home with IK Sävehof, Louise Sand took a leap of faith and moved to France.

Brest will certainly not regret it, and in all likelihood, neither will the 24-year-old Swedish international.

“Loui” as she is nicknamed, is not the tallest of all players – only 164 cm – but she compensates for her height through speed and technical skills.

Her style fits in perfectly with the French way of playing handball and she brings plenty of Champions League experience to the table.

Signing Idéhn – Brest got an excellent goalkeeper next to Cleopatre Darleux.

Although having joined from Danish Esbjerg, Idéhn originally comes from Sävehof just like Sand

One peculiar detail about Idéhn is the fact that she prefers to guard her goal in shorts.

She claims that it increases her freedom of movement, and that being hit hard by a shot on a bare thigh does not hurt particularly more than being protected by a track suit.

Well, if she says so…

Signing Pop-Lazic from Metz was a big boost for Brest.

The 29-year-old Serbian is probably among the absolutely best line players in the world, right now.

Of all the promising Brest signings over the summer, she appears to be a real hit.

Despite a very talented and promising team, Brest will have extreme difficulties making it past the group phase.