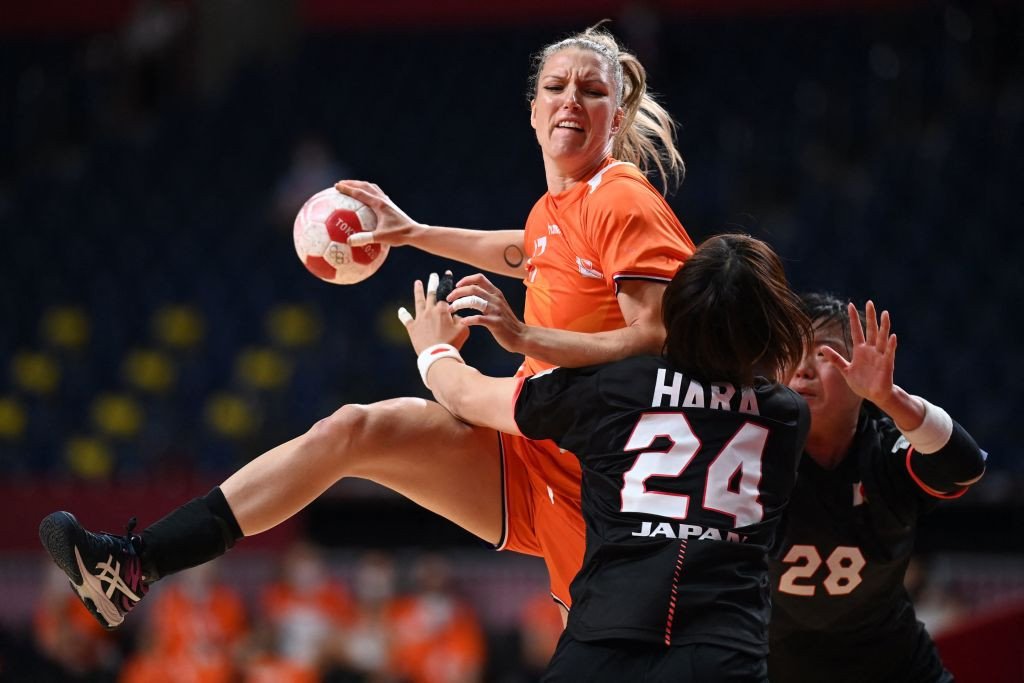 Japan no match for the reigning World champions in the opening round of the women’s handball tournament.

Both teams compete only for the second time in the Olympic games.

In 2016, the Netherlands made their debut at the Rio Olympics finishing fourth.  Whereas Japan’s first appearance dates all the way back to 1976, when they defeated the host nation, Canada, in the match for fifth place 15:14.

Japan’s Terumi Kurata finished the tournament as the overall top scorer with 28 goals.

Nycke Groot enjoyed a successful return to the national team scoring three times before she will retire after the Tokyo Olympics.  The thought that one of the all-time best players will stop for good  hasn’t completely sunk in yet.

In short – the host nation was no match for the reigning World champions.  Japan did not possess the tools to pose a serious challenge. Ten minutes into the game, Lois Abbingh had already scored 5 of her game high 7 goals, which put her team ahead by six.  The match was decided with 50 minutes of handball still to play.

A concentrated effort in defense laid the groundwork for the Durch victory in game one of the women’s handball tournament.  Danick Snelder and Kelly Dulfer held Japan’s offense to just four goals during the first fifteen minutes before loosening the grip somewhat.

By that time the Netherlands had already taken full advantage of numerous turnovers as well as Japan’s failed attempt to play 7-against-6.

On the other side Lois Abbingh & Co. scored without effort and it wasn’t before the 20th minute when Sakura Kametani delivered her first parade.  Shortly thereafter she left the pitch but her replacement could not stop the swift attacks of the  Dutch either, who maintained an eight goal lead after 30 minutes of handball.

While head coach, Emmanuel Mayonnade kept his central defenders on the court, Ulrik Kirkely (Japan) began experimenting with a 3:3 defense formation.  A decision that did not yield the desired results.

By the 40th minutes the Netherlands were ahead by ten goals for the first time in the match and Mayonnade began rotating his backcourt, allowing every player to get on the scoreboard.

The rest of the affair turned into practice session as the World champions took the foot off the pedal.

The Netherlands outclassed their opponent in every department – simply put.  Yet, 13 turnovers will leave coach Mayonnade with something to think about until his team meets South Korea, on Tuesday.