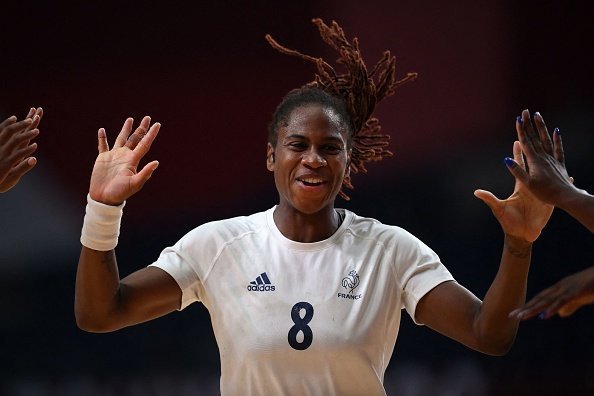 IN FOCUS: France found their mojo when it mattered most, taking charge of the game early on and taking advantage of Lois Abbingh’s injury to beat the reigning world champions and set up a semi-final date with Sweden on Friday.

Coach Olivier Krumbholz – 9
After his side appeared to lose a bit of their identity in the preliminary round, we should have trusted they would turn it on in the knockout rounds. Krumbholz’s team won this match in defence, like they usually do when at their best, while he allowed the attack and every single player the time and space to shine.

Amandine Leynaud – 10
It was the Leynaud show. A stunningly strong performance between the posts where she displayed everything that we love, and opposing teams hate, about her. Set the tone not only with her saves but her ability to set up easy goals for France on the break and was there to stop the Dutch comeback in its tracks. 22 saves at 51% easily deserves a top rating.

Laura Flippes – 9
Adopted the right back role brilliantly, scoring four goals in the opening eight minutes as France pulled clear, before moving to the wing and getting the job done there as well with a pair of goals. Besides one silly suspension, a mature and impressive performance.

Beatrice Edwige – 8
France’s defensive display was a joy to behold and reminiscent of that which brought them so much joy in 2016 to 2018. Edwige had a big part to play in that with an imposing performance, including a gigantic block on Groot midway through the first half.

Pauletta Foppa – 8
Wasn’t involved much in set attack in the first half but that all changed in the second as she became the focal point in France’s attack with five goals from six attempts, consolidating France’s stranglehold on the game.

Estelle Nze Minko – 8
Scored the first goal of the day, then had plenty of attention on her, offering few gaps before she won a penalty right on the half-time buzzer. While she did not get much room to take on shots herself, she made full use of the space she created with five assists in a composed display.

Coralie Lassource – 8
Started the game on the left wing and profited big time from Leynaud’s saves as she scored three fast break goals. Was fairly quiet after scoring a fourth goal shortly after the break but her job was largely done by then.

Grace Zaadi – 7
Her playmaking reflected France’s overall feeling, brimming with confidence. Had a fantastic long range shot pinged into the top corner, the pick of her goals in the first half. Was a bit quieter in the second half and turned the ball over a few too many times.

Allison Pineau – 7
Perfect from the penalty line and deadly in defence. Pineau’s shooting from the back court was not in tune but she more than made up for it in her defensive display, fighting for every ball, stealing and blocking a couple of balls as well.

Kalidiatou Niakate – 6
Only on for a short spell but contributed with a goal and an assist when it looked like the Netherlands were storming back in the second half.

Oceane Sercien Ugolin – 6
Came in and hammered home France’s advantage to make it a 10-goal lead midway through the first half. Her shooting was a bit up and down but the threat of long-range shooting was valuable to keep France’s options open.

Meline Nocandy – 6
Came in late in the first half and reinvigorated the French attack with a good goal to give France a more comfortable cushion before the break.

Pauline Coatanea – 6
Bit of a mixed bag in shooting from the right wing but 3 goals from 5 attempts on a day like today is more than enough. Put the cherry on top of France’s win by ghosting in behind the Dutch defence to score late on.

Chloe Valentini – 5
Came in midway through the first half as France were beginning to stagnate a bit and came up against an inspired Duijndam in goal, missing two of her three shots.

Coach Emmanuel Mayonnade – 6
Did his upmost to prevent the French onslaught by taking two very early timeouts but nothing seemed to work. Things went from bad to worse after it became clear Lois Abbingh would not be recovering from her early injury and nobody was able to fill that gap.

Rinka Duijndam – 8
Quite literally gave the ball away twice shortly after coming on, when they desperately needed to remain calm, but after that became an inspirational figure with seven saves in the first half. Only managed to make a couple more in the second half but a good performance overall.

Bo van Wetering – 7
Two classy goals late in the first half gave the Dutch some hope heading into the break. Scored another goal and made two steals on top of that in one of the better Dutch performances.

Nycke Groot – 6
Regained her composure late in the first half to take control of the back court and create opportunities for her team. Played practically the entire match in what appears to be her very last appearance. Tried her very best to make things happen at both ends of the court but lacked support in the back court.

Angela Malestein – 6
Brilliant from the penalty line but unable to get the job done on the wing with two missed shots.

Dione Housheer – 6
Made things happen and looked a real goalscoring threat while on court. Could and maybe should have been given more than her 20 minutes on court.

Merel Freriks – 6
Her first real involvement was a gorgeous lobbed goal and she continued in that vein with three goals on the line.

Debbie Bont – 6
Quiet day out on the right wing but took a couple of chances when they came her way.

Lois Abbingh – 5
Tried to force the issue with four shots in the opening five minutes, scoring only once, then went down with a leg injury and unfortunately her day was cut way too short.

Danick Snelder – 5
Did most of her work in defence because she was barely allowed to be involved in attack. Enveloped by the French defence, only getting one shot away all game.

Kelly Dulfer – 4
Was unable to assert herself in defence and besides a few assists, couldn’t make much of a dent in attack when given the opportunity.

Martine Smeets – 4
The ball barely reached her while she was on the wing with only one missed opportunity on the account.

Tess Wester – 4
With just a pair of saves in either half, nothing seemed to click for Wester today as Duijndam took over early on.

Laura van der Heijden – 3
Her shooting abandoned her today as there appeared to be no way past Leynaud and her attack felt too passive besides that.

Inger Smits – 2
Has really stepped up at this championship but was unable to do so in the absence of Abbingh today. Shooting her heart out but only finding the net twice from nine attempts.