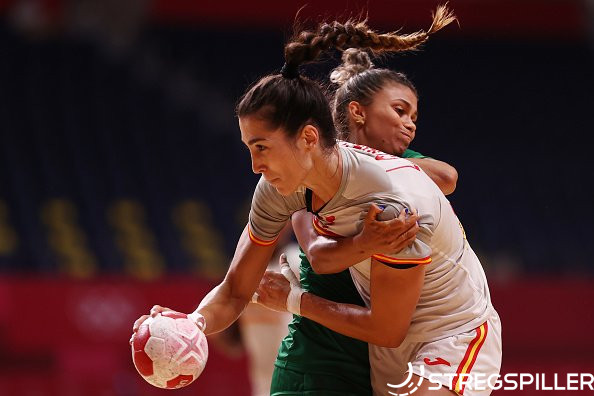 After a crushing loss in round one of the Olympic handball tournament against Sweden, Spain landed a convincing victory against France.

Brazil surprised many of the pundits with a strong showing against Russia (24:24) in their opener and followed through with an impressive performance versus Hungary (33:27), in round two.

Spain outlasted Brazil over the course of 60 minutes courtesy of yet another excellent performance of goalkeeper, Silvia Navarro, and a much deeper bench.  A red card for Elisabeth Cesareo late in the game did not deter Spain, who moved up into second place in Group B, for now.

Brazil was in firm control for the better part of 20 minutes before Nerea Pena brought Spain back into the game, scoring on back-to-back penalties.

Following a spectacular goal from Bruna de Paula (Brazil) from outside the nine-meter perimeter, Spain opened a three-goal window which Brazil would not be able to close again for the remainder of the match.

De Paula’s goal in the 50th minute brought the 2013 World champions back within one, but even a red card for Elisabeth Cesareo did not disrupt the rhythm of the Spanish game.

Three consecutive goals of Alexandrina Cabral extended Spain’s advantage to four with five minutes to play – a hurdle Brazil could not overcome anymore.

From the outset it was clear that this encounter would turn into a physical game as both teams prefer to play a very athletic style of handball.

Carlos Viver’s (head coach Spain) ability to rely on a somewhat deeper bench ultimately paid off and Silvia Navarro’s 46% save rate (!)  made the difference in a hard fought match.

On the other side, Bruna de Paula (8 goals) did all the heavy lifting, but could not get the support of Amorim and Vieira on the offensive end – not today.

“We have reinvented ourselves and we have taken the game forward”

“It has been known to suffer after an entrance (to a tournament ed.) that has not been good.”

Brazil will meet a fast running team from Sweden, who have yet to lose a match, while Spain will face Hungary. The team of head coach, Gabor Elek, will be keen to redeem themselves from the losses against France and Brazil.