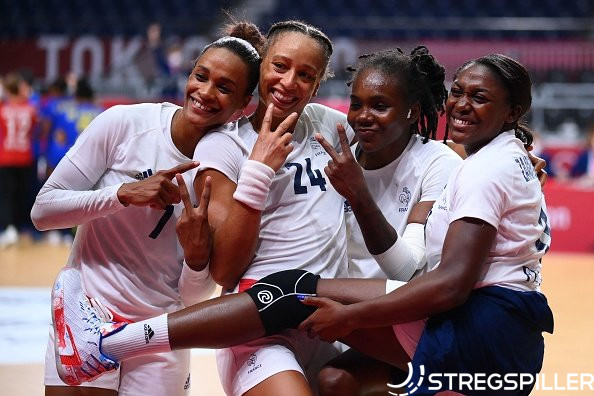 It could have been different but Allison Pineau’s last ditch effort seconds before the end of the match against Russia did not hit the back of the net.  As a result the runner-up at EURO 2020 found themselves in a “do-or-die” scenario in round five of the Tokyo Olympics.  Not entirely surprising when considering the uneven performance of “Les Bleus” thus far in the tournament.  It has been a struggle.

The same held true for Brazil. After three points in the first two games of the competition, Amorim & Co. took two hits against Spain and Sweden and round five would determine who of the two former World champions would reach the elimination round.

60% of the participants in the stregspiller snap poll saw France advancing to the quarterfinal.

A nervous beginning, turn overs, unforced errors and fumbled balls characterized the opening phase of the match before Coralie Lassource secured a two-goal advantage (7:5) midway through the first half – France would never look back.

Once they got their nerves under control, France fully deserved to advance to the elimination round of the tournament as they were the better team on this Monday morning in Tokyo.

It took almost 10 minutes before the two teams had their nerves under control.  Only Alexandra do Nascimento appeared unfazed as she kept Brazil in the match during the opening phase.

On the other side, it was team captain. Coralie Lassource, whose goals allowed her teammates to calm down.

Midway through the half three unanswered goals by right-back, Sercien-Ugolin, extended the French lead to four as Brazil struggled to score from the field.

From the 15 minute mark France would go on a 10:6 run and only two penalty shots from Adriana Cardos shortly before the break kept Brazil in the game.

By the time the two teams changed sides, the silver medal winners of the 2016 Olympics in Rio enjoyed a comfortable six goal advantage.

When Coatanea scored (18:11) it looked like France would blow the game wide open. Instead Brazil answered with four successive goals of their own and the team of head coach, Olivier Krumbholz, looked rattled.

Brazil’s comeback was short lived and as it turned out it remained the only scare France would face in the second half.

After Cardoso’s successful penalty shot, Brazil would score only on three more occasions over the course of  17 minutes.

France went off to the races and seven minutes before the end of the match were ahead by ten goals for the first time.  The match was effectively decided.

All in all France was too strong and it showed.  With the exception of Leynaud and Darleux in goal every player got to score.

Goalkeeper Cleopatre Darleux (45% saves in the 2nd half) stood out from an otherwise strong collective.

Unlike in previous games at the Tokyo Olympics, “Les Bleus” kept their calm at the beginning of the second half when Brazil mounted a charge.  This time France would not come apart and the win of this decisive match was fully deserved.

France made it to the quarterfinals but as of this writing it remained open which opponent the squad of Olivier Krumbholz would face next.