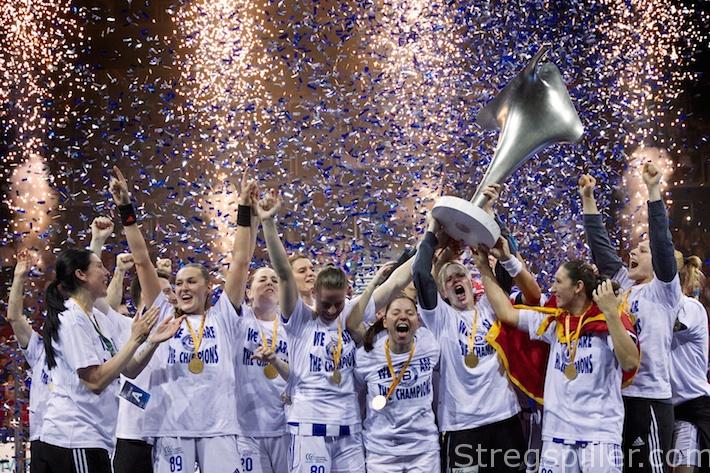 This year, the tournament starts with the finale!

Column – The Women´s FINAL4 may well be decided on Saturday already.  The winner of the semi-final between Buducnost and Gyor is the likely candidate to win the Champions League this season.

This year, the Women´s EHF FINAL4 will be played following a brand new “concept”.  The event will start with the grand finale!

How can that be, you may ask yourself.

Very simple: The winner of the first semi-final, Buducnost vs Gyor will also win the tournament!

With all due respect to CSM Bucuresti and Vardar Skopje – and with special regard to CSM´s tactically brilliant quarter-final wins against Rostov-Don – but  Buducnost and Gyor are the two strongest women teams in Europe at the moment, and the winner of this game will also win the final on Sunday – period.

That said, I am the first to admit that we look at the most balanced FINAL4 in the short history of the event.  This time, unlike in the previous two years, it is impossible to point out an obvious underdog.

In 2014, the very first year Europe’s finest female handball players competed in a FINAL4 format, FC Midtjylland was considerably weaker than the three other semi-finalists and the same truth applied to Dinamo Sinara last year.

This year, in my humble opinion, it is not possible to identify a team, where you can say that they cannot win the trophy.

All clubs have a shot at the ultimate prize, but obviously, some have a better chance than others and the winner of the meeting between Buducnost and Gyor has the best opportunity of all of them.  By the way, all four teams in the FINAL4 came from Group 2 of the main round.

But let us take a closer look at the games and the teams involved.

Adzic vs. Ambros – who outsmarts the other?

In this match, the very first one of the four competitions at Papp László Arena – the winner of the Women´s Champions League 2015/16 will be found.  The victorious crew of this game will also succeed in the final match, regardless of the opponent.

But which team will win?

That’s the much tougher question and the answer may be detected when taking a look at the bench of the two clubs.

It is not only two great teams, who are up against each other.  Two outstanding coaches will try to guide their players to success.

Tactically, Dragan Adzic (Buducnost) and Ambros Martin (Gyor) are among the absolute best in the world – if not the two best.  There is no doubt that Mr. Adzic and Mr. Martin will show up equally well prepared as will their players.

Therefore, it is likely to be the one coach who reacts the best and fastest during the game – the one who alternates his team´s tactics according to the course of action.

The fact that we are dealing with two extremely evenly matched teams is probably underlined best by the two close matches the two squads played in the main round.

A 25:22 win for Buducnost and a 26:24 victory for Gyor on their respective home ground says just about everything.  Will “home court” be an advantage for Gyor?

You will notice the citation marks.  Of course, a Hungarian side should have an edge in a game that is played on home soil.  But Papp Lászlo Arena is not Audi Arena in Gyor and it appears to be unlikely that the same atmosphere can recreated in Budapest.

So, I am awarding a small and decisive edge to Buducnost that will put Adzic’s team past Gyor.  In any event, I expect a hard fought contest and a very good and entertaining match.

When I think back to the quarter-finals between CSM and Rostov-Don (CSM won both legs by one goal) I cannot help but thinking of a game of chess.

I have no idea, if the two Danish coaches – Kim Rasmussen and Jan Leslie – play chess at all, but for a former chess player like me, it was impossible to not see the tactical finesse in those two matches, as in a game of chess with two great minds facing each other.

Surprisingly, Rasmussen and his crew from Bucuresti managed to eliminate the only team that had gone unscathed through the current Champions League season until then.

Do these remarkable performances make them the favorite against Vardar?

Maybe not, when looking at Bucuresti’s lineup one-by-one.  Comparing player by player, Vardar have the deeper squad, if not the better one altogether.

Still, the tactical skills, Kim Rasmussen revealed against Rostov may be enough to take his team a step further.

If some think, a CSM win in this match will be a surprise – well, then I do predict a surprise!

All of it translates into a Sunday schedule that I expect to look like this:

Gyor will win this one narrowly and the FINAL4 2016 will be no more than just another memorable event for Vardar.

Neither Rasmussen´s “chess skills” nor his players´ unquestionable qualities will be enough anymore.

Adzic and his much stronger Buducnost team will win and possibly win clearly, as CSM will have spent most of their physical resources in the semi-final.  This and the short recovery period between semi-final and final, will work in Buducnost’s favor.

So, Buducnost will win the Champions League 2016 for the second time in a row and for the third time in four years – if my predictions do not turn out to be completely wrong!

But maybe they are – actually, it would be rather refreshing or would it not?  Handball would be a boring game, if we could predict everything all the time.