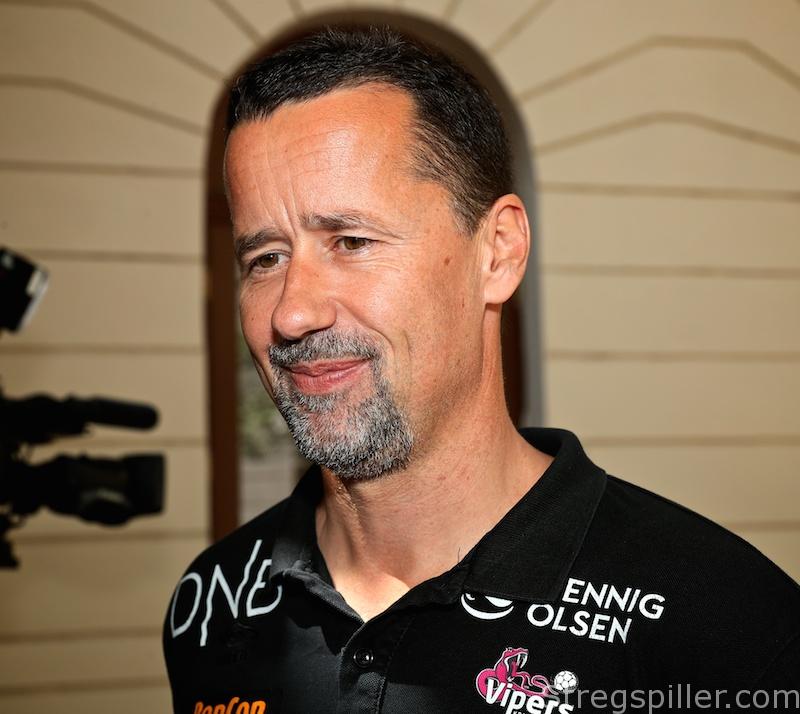 “You cannot play a Champions League semi-final without feeling pressure”

INTERVIEW – In this interview with stregspiller.com, Vipers coach, Ole Gustav Gjekstad, admits that his players cannot play completely free of pressure, when they enter their semi-final clash against Györ, despite being the underdog.

The underdog can play without pressure – an adage that applies to Vipers Kristiansand’s first appearance at the DELO Women’s EHF FINAL4.

When you play a Champions League semi-final in front of 12.500 spectators, like Vipers will do on Saturday afternoon, when they face mighty Györ, at Papp Laszlo Arena, in Budapest, you cannot avoid but feel the pressure.

“It’s true that some kind of pressure will be inevitable and if we lower our shoulders too much, things may really go wrong for us,” summarizes Vipers head coach, Ole Gustav Gjekstad.

While the team are debutants at the FINAL4, their coach is attending the season ending event, for his second time.  In 2015, he took another Norwegian club, Larvik HK, to the final, where Buducnost turned out to be too strong.

“It’s great to be back after four years. A little special, but a good feeling all in all,” Ole Gustav Gjekstad says.

How will the coach, who has tried it all before, prepare his team for this new experience?

“The most important thing is to stay calm and do our utmost to make these games appear like ordinary handball matches.

“Of course, we are well aware that there is some extra attention around an event like this one, but at least we’ll try to approach it as a normal Champions League round,” he explains.

Not all players in the Vipers team are FINAL4 debutants, of course.

For instance, goalkeeper, Katrine Lunde, has  been there many times before and given her previous stint with Györ, she should know Vipers´ semi-final opponent inside out.

“It is obvious that I will make particular use of those players, who have been here before, when I prepare my team for the event. I also let the younger and less experienced players lean on the veterans, on an occasion like this one

“Players, who have tried this before have a lot of experience, which they pass on to their teammates.  They also contribute to a calm atmosphere around all the hype. Those players are extremely valuable to us,” says the 51-year-old coach, who used to be a fine handball player himself, playing 149 internationals for Norway.

Although, he tries to protect his players from the hype around handball’s biggest event on club level, he makes no secret of the fact that having reached the FINAL4 means a lot for the club.

“Yes, it definitely means a lot to all of us.

“On the plane down here, we had 200 fans joining us – so, we can really feel the interest back home.

“We may have reached the FINAL4 a bit earlier than we expected, but in this sport you have to take the opportunities you’ll get.”

Speaking of chances – does he see his team having a chance in the semi-final against Györ, the very squad that defeated his team twice in the main round of this season?

“I think we have to realize that we are the challenger, who may be a stone in the shoe of Györ.

“Obviously, we’ll try to win, but it is a match with Györ as the big favorite.  Yet, we also recognize that we can do many things better than we did in the two previous games against them.

“For example, we can improve our defensive game and if we succeed, it will definitely present some opportunities,” says Ole Gustav Gjekstad, who feels that his players firmly believe in their chances to pull a sensation, on Saturday.

“Yes, I think that my players believe in their chance.

“That said, we have to realize that we must “hit the day” tactically as well as physically.  We are looking forward to the match – actually, I do believe that we can put Györ to the test”.

Impossible to not feel pressure

He is aware, however, that once his players take the to the court on Saturday, in front of 12.500 spectators, pressure will build.

“It is impossible to not feel the pressure and it is equally important that we put a certain pressure on us. If we lower our shoulders too much, it will be a sign that we expect Györ to win, something we will not do.

“Obviously, we will fight hard to win and in order to do so, we must put some pressure on us as well. If we don’t, we cannot show a decent performance.