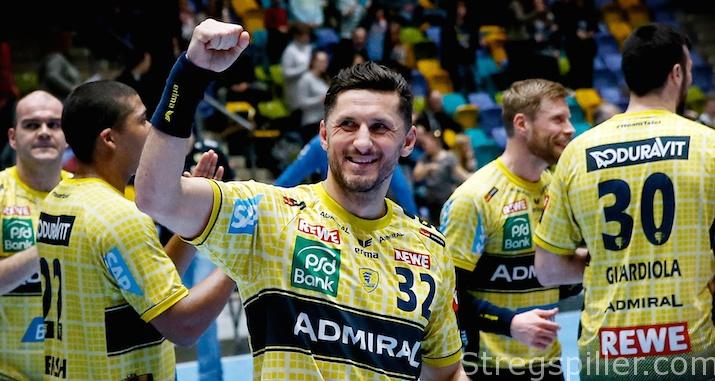 MATCH OF THE WEEK – Rhein-Neckar Löwen were about to decide everything in one game with six goals up at Sparkassen Arena, but THW Kiel managed to come back following an impressive finish.

With one goal up before the second leg, Löwen are still the favorite to reach the quarter-final.

Both teams ended their group phase campaigns with subpar performances.

“If the Lions do not want the prey, someone else will,” I wrote in my column after the group phase.

Two six-goal defeats against Zagreb and Szeged robbed Rhein-Neckar Löwen of the group win and sent them down to fourth position in Group B.

Kiel would have finished fifth in Group A regardless of the result of their last group match – still, the 24:42 defeat against PSG was a stunner.

Rhein-Neckar Löwen would come to the north Germany with confidence, as they already won at Sparkassen Arena this season.   Just before Christmas, the team of former Kiel winger Nikolaj Jacobsen recorded a 29:26 victory in a Bundesliga match.

Kiel were missing playmaker Domagoj Dunvnjak and line player René Toft Hansen due to injury, while right-back Steffen Weinhold was back in action.

Finally, Löwen coach Nicolaj Jakobsen had his complete crew at his disposal with the exception of long-term injured left-back, Michel Abt.

Before the match, Andy Schmid stated that Kiel was definitely not his favorite opponent in the round of Last 16.

Maybe the Swiss playmaker of Rhein-Neckar Löwen has changed his point of view after the fight at Sparkassen Arena on Wednesday evening.

Schmid and his teammates took a huge step towards the quarter-final, courtesy of a one goal victory.  And, they were heading for a considerably larger win, as they were leading 19:13 early in the second half.

An impressive Kiel finish reduced the deficit to one goal in the end, allowing the German record champion a glimmer of hope reaching the next round.

The way things were going, Kiel could not be unhappy being down by two goals at the half.

With one minute left, Löwen were leading by four (12:8), but two quick goals from Marko Vujin and Christian Zeitz made the half time result much more bearable for the home team.

It concluded a first half that was dominated by Löwen after an equal start.

Both teams opened the match with a 5-1 defense.   But as the game progressed, Löwen had more success with their defense tactic, while Andreas Palicka in goal did his part.

The 30-year-old Swedish international performed a number of miraculous saves and contributed big time while limiting Kiel’s score.  A saving percentage of 55 just sums it up.

Another problem for Kiel´s attack was the absence of Duvnjak.

Young Nicola Bilyk started in the playmaker position, and although the talented Austrian did well, it was obvious that he does not possess “Dule´s” experience.

Kiel were only leading once in the first half, at 4:3.  The rest of the time, the visitors were in the driver´s seat.

15 minutes into the match, Alexander Petersson gave Löwen their first two goal lead (7:5).  And in the minutes that followed, Rhein-Neckar went up 12:8, before the two aforementioned goals at the end of the half gave Kiel some new hope.

That “light at the end of the tunnel” was extinguished at the start of the second half.  After barely three minutes Alfred Gislason already had to call time out.  At that point, his team was trailing 11:16.

And at first, the timeout did not help.  Rhein-Neckar Löwen increased their lead even further at 19:13 and at that point, Kiel appeared to be heading for another humiliating loss.

But a much improved defense and a strong performance of Andrea Wolff in goal, allowed the home team to reduce the gap.

In attack, Kiel played with more patience and the hasty shots seen earlier were a thing of the past.

At the same time, Christian Dissinger and Steffen Weinhold stepped it up, and with three and a half minutes left, Weinhold reduced the deficit to one goal only, when he made it 22:23.

However, Kiel did not to catch up completely, as the guest managed to stay ahead by one or two goals for the remainder of the game.

With a saving percentage of 55 in the first half alone and 44 in total, Andreas Palicka takes the award.

He played a huge part in Rhein-Neckar Löwen dominating the first half, and his saves at critical points kept the visitors in the lead all the way to the end.

The spectators at Sparkassen Arena never let their team down in times of trouble.  The support from the 10,000 fans was magnificent, even when the home team was down by six.  They played a big part in the comeback of the hosts in the last 20 minutes.

With one goal up after the first leg, Rhein-Neckar Löwen are now the clear favorite to reach the quarter-final.

However, despite another defeat on home ground, Kiel managed to restore their confidence towards the end of the game.  And it’s certainly possible that Kiel’s “Zebras” will top the Lions at SAP Arena, next Thursday